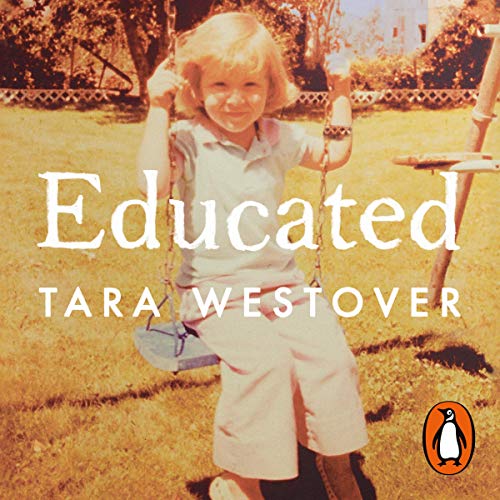 s kikuchi
5つ星のうち5.0 Human spirit to overcome is evident in this memoir
2019年8月2日に日本でレビュー済み
Amazonで購入
If you have not read Educated, I highly recommend that you do. It tells how metamorphosis takes time, how abandoning old beliefs can be painful and liberating., and how the human spirit is steadfast and unrelenting. Truly inspirational!
続きを読む
9人のお客様がこれが役に立ったと考えています
役に立った
違反を報告
レビュー を日本語に翻訳する

Mrs. S. Thorne
5つ星のうち3.0 A bit depressing
2018年8月27日に英国でレビュー済み
Amazonで購入
I expected this book to be more redemptive, and it finally left me rather depressed. I suppose I was waiting for the author's vindication, and I probably wanted a bit of retribution to fall on those appalling parents and that horrible brother. It is hard to believe this was happening during the 21st century, and I admire the author for her ultimate escape, though I was frustrated by the number of times she returned home and faced more abuse. Don't want to re-read it.
続きを読む
122人のお客様がこれが役に立ったと考えています
違反を報告
レビュー を日本語に翻訳する

Bookthrower
5つ星のうち5.0 Educational
2018年4月12日に英国でレビュー済み
Amazonで購入
Some autobiographical memoirs of traumatic childhoods are
self-pitying and self- absorbed. This one is not. The author gives a balanced picture of her troubled family,in which madness is combined with ingenuity, intelligence and grit, and of the wider Mormon community in which she grew up. It provides a fascinating insight into the complex effects of mental illness on family relationships and the individual. It is also a moving story of one individual's successful struggle to overcome those effects and live a satisfying life.
続きを読む
122人のお客様がこれが役に立ったと考えています
違反を報告
レビュー を日本語に翻訳する

megmerrett
5つ星のうち4.0 I've been Educated
2018年9月17日に英国でレビュー済み
Amazonで購入
Usually I take issue with someone younger than me churning out a memoir. On this occasion I’m all for it. This is a stonker. I couldn’t believe that it’s based in the late 20th and early 21st century. I kept slipping into an assumption that it was 1960s America.

I read a review in a broadsheet that mentioned Westover’s author’s voice being distant and a little cold. I didn’t feel this at all. I felt it was all the more powerful for not being doused in flowery descriptions. It was clear and real and honest.

I like the references to how reliable a storyteller is, how our memories differ and how, in real life we have to find a way of weaving varying recollections to find a truth.

It’s an anthem to the power of education and knowledge. Fascinating and incredibly readable. The numerous accidents felt like the tense moments in an episode of Casualty. You know whenever there’s a scene with a tractor that something horrific is going to happen.

millhall
5つ星のうち4.0 Educated, against the odds.
2018年12月25日に英国でレビュー済み
Amazonで購入
A remarkable book , written by a remarkable person. Brought up by parents who were fanatical Mormons, she had to suffer threats and aggression from a dysfunctional brother, a childhood without any formal education and repeated pronouncements that the end of the world was nigh. Despite spending much of her pre- pubertal years as an unpaid labourer, she contrived to turn her life around and ended up as a scholar in both Cambridge and Oxford. Inevitably, she had great difficulty in maintaining relationships largely because core facts about history and life outside the teachings of the Mormon Church were a blank page to her. She had never heard of the Holocaust; knew nothing of the World Wars and was told that the authorities had murdered members of another Mormon family because of their faith. Despite all of these encumbrances, she became a highly respected academic. Her success was bought at the price of her family relationships but she came to accept that cost. The book can be a little fragmentary with no continuous chronological line, but it is a compelling read which I will not easily forget.
続きを読む
71人のお客様がこれが役に立ったと考えています
違反を報告
レビュー を日本語に翻訳する

M
5つ星のうち4.0 A gripping read and an incredible story powerfully told
2019年2月11日に英国でレビュー済み
Amazonで購入
This is an absolutely riveting book that I couldn’t put down until finally I had finished it in the small hours of the morning.

Tara Westover tells the story of her childhood and upbringing with such descriptive narrative that it’s easy to see the farm and mountain where she grew up and to imagine what it must have been like to be a young girl in her family house.

When the first incidents start to appear one is held in a kind of shock. This is horrible, so wrong, so very wrong that she is treated like this and we wait for someone to recognise the abuse and intervene and put a stop to it.

But the interventions never come and with each successive incident of abuse, violence and gross neglect we read on in increasing disbelief and horror that no one has stopped these people, called them out on what they are doing and stepped in to protect the victims.

Tara tells her life story so skilfully, she somehow allows us to experience what she went through and yet disassociate from the worst parts simultaneously in the same way she did. It’s such brilliant brilliant writing technique to tell us and yet show us in the same sentence. Offering narrative of what her future self came to understand was happening to her, she relays at the same time perfectly how the young girl she was then lived it.

With either carefully crafted intention or from therapeutic necessity (or maybe both) she leads the reader to flow through the story narrative smoothly and expertly and then stop abruptly when an incident happens. The way she writes and explains each incident forces a rereading of the paragraph more than once, for suddenly there’s a change in pace here and it’s relayed from a disassociated perspective whilst still remaining in the first person.

I can’t help thinking that this emulates in part the way she herself must have visited and revisited these same incidents repeatedly in her head and in her journal to try to make sense of what has happening to her. Except she somehow found a way to normalise it so she could continue to survive and function in such a dangerous hostile environment.

Truly it’s such marvellous intelligent writing and all the more painful for it. We feel a truer impact of her painful incredible story and feel for her in a way that is at once frustrating because we are powerless ourselves to step in and save her from the people who are her family. Or even perhaps to save them all from themselves.

It’s interesting that this is domestic abuse and violence in full flow but Tara never calls it that in the book, save a indicative third party reference in the end. She reaches for instead repeatedly, an understanding of why her family behaved the way they did. Her love for them and need not to unfairly label them, even whilst recalling such pain, is obvious even here.

In some ways the second and last part of the book are more heartbreaking and haunting. Whilst clearly all the physical wounds have healed and by the power of her own internal will, strength, resilience and focus and determination she has transformed her life into what any of us would applaud as a brilliant success (and most of us can only aspire to in our dreams), there is a feeling that this is all overshadowed by the pain of her cruel and unfair eviction from the family.

She describes the effects of their gaslighting with disturbing clarity. Physical violence is one thing but to undermine and eradicate a person’s sense of reality and self belief is an abhorrent abuse that leaves no visible scars, yet has a destructive force that can demolish a life from the inside out.

There’s a sense that even with her intellectual understanding, she still underneath it all keenly feels she’s had to pay a high price for her personal safety, success and happiness. That whilst more than half of her family have cruelly rejected and evicted her and continue to slander her in attempt to regain lost power and control, she still feels love and undercurrents of loyalty towards them even whilst she knows she can no longer concede to the abuse.

The book is an excellent example of the devastating cost an absence of education and self-belief can have. What Tara Westover doesn’t emphasise and is notably non-vocal and modest about is her own inspiring inner strength and brilliance as a human being.

One can’t help but feel that in the absence of having a family who appreciated their incredible good fortune to have such a remarkable daughter in their lives and who lived up to their responsibilities, she at some point is finally able to fully let go of them within herself. To fully let go of that innate desire to have the love and regard of her parents. Is this ever truly possible for a child, even an adult one? That’s debateable but if anyone deserves to be happy and free and lighthearted and at true peace within herself, it’s undoubtedly Tara Westover.
続きを読む
58人のお客様がこれが役に立ったと考えています
違反を報告
レビュー を日本語に翻訳する
すべてのレビューを参照します
トップへ戻る
Amazonについて
Amazonでビジネス
Amazonでのお支払い
ヘルプ＆ガイド
日本語ショッピングのための言語を選択します。 日本ショッピングのための国/地域を選択します。
© 1996-2020, Amazon.com, Inc. or its affiliates