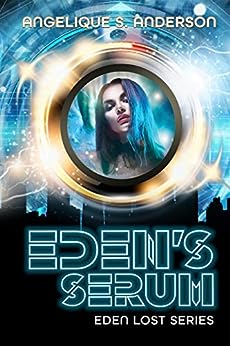 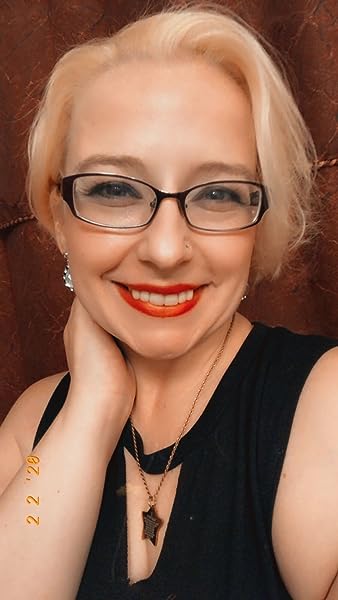 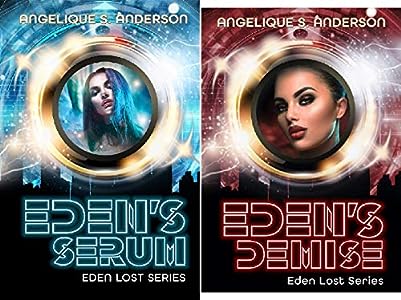 Angelique is an avid mover, adventurer, and chaser of dreams. She began her journey in Kalispell, Montana. She is a singer and songwriter by avocation, and mother to four precocious little ones. She hopes to encourage others with her journey and passion for life. She is currently adventuring in Stockton, California, with her high school sweetheart. --このテキストは、paperback版に関連付けられています。

Alien Customer
5つ星のうち4.0 Great spin on the classic Adam and Eve Story
2021年6月29日にカナダでレビュー済み
Amazonで購入
Encapsulated in a beautiful cover, ,this horrific story tells about a world where tech has advanced far beyond the need for identification and money, and even illness. Eden’s Serum is one that only the richest of the rich can afford, offering youth, health and above all, immortality. But as Adam is about to find out, not everything is as it seems, and his ultra rich bachelor life may not b as satisfying as it once was.

After developing a kind of super card that took the world by storm, dubbed simply the Identicoin, the book begins with an emergency. And Adam is headed head first into the bomb threat at his workplace to do whatever he can to save his life’s work. Interesting enough, this opening scene really sets the pace for the rest of the book, if you can believe it. Because two years later, the Indenticoin has completely taken over the world. And Adam has more money than he knows what to do with babies are now assigned an Identicoin at birth, holding all the important paperwork they could ever need for their upcoming lives, and are required to wear it at all times in public by law.

The next technological leap that Adam wants to take with his life is making himself immortal. Through injection and claimed to be made from plants, it seems safe enough, after all, Adam’s genius must stick around as long as possible so that he can continue to change the world with his inventions. But is it truly safe? Has it even been fully tested? And why do the doctors preparing him for this next part of his life seem so sketchy? What are they hiding?

Aside from these everyday problems; Adam’s work turns out to be spying deep into his personal life, which he’s obviously not happy about, but is willing to put up with it for a cushy promotion, new house, and a workplace he’s allowed to run, by himself. But not long after his injection, he goes to work hiring people for his new office, and begins experiencing horrible blackouts, accompanied by blinding pain.

Honestly, I really enjoyed this book. I love things about tech and the future and everything like that, and this book fits that perfectly. It was mysterious and exciting, and all the characters were very realistic with their good and bad traits showing for everyone to be hyperaware of. I was very interested in uncovering everything that was hidden by the higher-ups in this story, and the big adventure that Adam and Evelyn have to o through to really get to know what’s really going on was extremely gripping and easy to get into. I think this was a really great take on the classic Adam ad Eve and the Garden of Eden story. I can’t wait to see what’s going to happen next in the series, and I think to put it simply, this is a great story about trusting y our gut and your own intuition. If you like science fiction and are sixteen plus years old, and also not squeamish about violence, I would say definitely give this book a shot!

KL Allendoerfer
5つ星のうち3.0 Enjoyable Sci-Fi Romance
2016年8月23日にアメリカ合衆国でレビュー済み
Amazonで購入
This book is a very readable and fun science fiction romance. Its fast pace and plot twists made it feel like a screenplay for a summer sci fi action thriller. There were a couple of times the plot genuinely surprised me and made me sit up in my chair and take notice. That rarely happens to me any more as a reader, even with science fiction.

Having worked in the biotech industry, I didn’t find the life-extension science here to be particularly believable, even in the near future, but the author did enough research and told a good enough story that I was willing to (mostly) suspend disbelief in an immortality serum and go along for the ride. I had a harder time believing that the underlying conspiracy could have gone on for as long as it did without being found out and shut down much sooner. There are already a number of biotech companies and even more academic labs working on the problem of life extension, so Plant Harmonics would not have been alone in that space. And even in our own time, if a tech company’s technology is thought to be fraudulent or even based on shaky data, the market shows signs of being self-correcting. For example, look at the rise and precipitous fall of Theranos.

The characters were appealing, but were pretty standard SF heroes and villains. Adam, the protagonist, was recognizable as a Silicon Valley overachiever who had lost the art of relationships. Evelyn was realistic but we didn’t learn much more about her than that she was pretty, spunky, and loyal to family. Watching these two characters get together romantically as they solve a massive technological conspiracy was enjoyable but not particularly memorable. The villains had some interesting, even poignant motivations for doing what they did, but I think they needed to be much more devious.

I would read other books by this author as I think she writes intelligently and has ideas about corporate invasion of privacy that deserve to be fleshed out further. With this novel she seems to be on the path of finding her own voice and exploring the themes that she finds most important.
続きを読む
7人のお客様がこれが役に立ったと考えています
違反を報告
レビュー を日本語に翻訳する

Cynthia
5つ星のうち5.0 but the author did an excellent job placing Adam in a situation he was able ...
2017年11月26日にアメリカ合衆国でレビュー済み
Amazonで購入
Adam Carpenter, software tycoon for Indenticoin, the worlds largest virtual tracking system, is finally ready to make the decision of a lifetime.

He is going to pay the $2MM price tag, to receive Eden's Serum, a special injection which will freeze the aging process, virtually giving him immortality.

But just as he is finalizing the procedure, he begins to have second thoughts. He notices, the doctor administering the injections, who exclusively endorses the revolutionary procedure worldwide, is lying about receiving the injection himself.

Despite the doctors lies, Adam is too self-centered to reject the opportunity and receives the serum. Shortly after, his life as he knows it begins to spiral out of control. His body is counteracting the serum, and he will be dead in less than a week if he does not find an antidote. But he may not even make it a week, because snooping around, looking for answers about Eden's Serum just put a death mark on his back.

This book was exciting from beginning to end. I didn't care much for Adam at the beginning as he was very self-centered, but the author did an excellent job placing Adam in a situation he was able to learn and grow from. By the end of the book, he was a completely changed man. For the better.
続きを読む
3人のお客様がこれが役に立ったと考えています
違反を報告
レビュー を日本語に翻訳する

Ducky
5つ星のうち4.0 It's a wild ride
2017年4月22日にアメリカ合衆国でレビュー済み
Amazonで購入
When I started this book, I had a hard time getting into it. It seemed to be written for MG or YA as far as the style, but the topic did not fit those categories. Approximately half way through it though, the author hit her stride and the story took off from there.

If you were very wealthy and someone was offering a "serum" to give you immortality would you take it? Would you pay the exorbitant fee to be assured that you would never grow old, never die, never get sick?

Adam has a good life. He has developed a technology that allows everyone to be tracked and their identities to be safe from theft. He's making great money, has just been offered a massive promotion, and he's met a woman he could see himself spending his life with. But there is a serpent in his personal paradise. The company he works for has far too much knowledge of his personal life. They even know that he has decided to take Eden's Serum, the drug that purports to make you immortal. Despite the red flags and some serious misgivings, Adam goes through with the procedure and that's when his perfect life rapidly begins to fall apart.