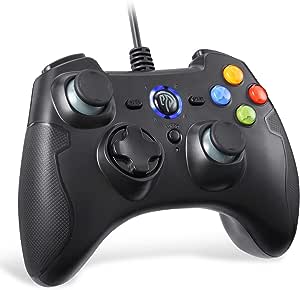 Charlie Gillen
5つ星のうち1.0 It's okay, but it's not great.. and that's while it lasts
2019年10月22日に英国でレビュー済み
色: ESM-9100 黒Amazonで購入
So it's a nice controller, for the most part. It looks nice, it feels nice (for the most part*) to hold, but...
The triggers aren't as comfortable as other controllers, the corners of them aren't smoothed, so holding them digs into the fingers a little.
Also, the triggers can't be mapped to the turbo button (which basically makes the turbo button inconsequential for shooting games ~ the whole reason I wanted a controller with a turbo button in the first place).

The vibration function in these controllers (I bought 2, so it doesn't seem to be a unique problem) seems to be very weak as well. I'm not saying that'll be bad for everyone, but I prefer to actually feel the vibration when I'm using a controller, and even with maxed out vibration settings I barely feel anything from this controller compared to my previous controllers.

It looks nice, but it's not particularly comfortable to use.

I plugged it in and it worked straight off the bat without problems (so far*). So I can't knock it for being a usable controller, I'm just disappointed that the vibration is weak and the turbo button is worthless for what I wanted it for.

Additionally, the packaging wasn't the greatest, and there appears to be a little bit of damage at the base of the usb wires on each of my controllers, so I'm somewhat concerned about the lifespan these controllers might have.

Edit: It's barely been 6 months since I bought these, and they've now both broken. Any praise I had is now gone, no controller should have an average lifespan of 3 months.
続きを読む
7人のお客様がこれが役に立ったと考えています
違反を報告
レビュー を日本語に翻訳する

Sam Robinson
5つ星のうち2.0 Does not last.
2020年6月5日に英国でレビュー済み
色: ESM-9100 黒Amazonで購入
It's the closest thing to a genuine Xbox 360 controller I've found in terms of ergonomics and accuracy, although still doesn't equal it. Call it maybe an 8/10 overall. Price is good, so i wouldn't have an issue with it not being as accurate and nice to hold.
However.
I received the controller in early January. It no longer works correctly. The left analogue stick has a mind of its own. I can't even reliably play FIFA of all things because the direction I point the stick in and the direction this translates to in-game are so often different. Would not expect any product to start going wrong after only 4-5 months, and be getting towards unusable within 6.
続きを読む
3人のお客様がこれが役に立ったと考えています
違反を報告
レビュー を日本語に翻訳する

Paul.
5つ星のうち5.0 SEEMS TO WORK WELL.
2021年2月21日に英国でレビュー済み
色: ESM-9100 黒Amazonで購入
This is a short term review. The controller seems quite well made with a 2m cable. The driver was easy to download from the EasySMX site and easy to install (offline). Setup was straightforward running Windows 10 v.1909. I use an offline PC for most things for security, privacy and freedom from disturbance by unwanted popups and those awful, disruptive Windows feature updates. The manual is minimal, but written in good English. I can't say how long it will last or compare it with other controllers because I've never used one before.
続きを読む
1人のお客様がこれが役に立ったと考えています
違反を報告
レビュー を日本語に翻訳する

James
5つ星のうち5.0 Great controller. Won some PES games with it! No complaints!
2020年7月27日に英国でレビュー済み
色: ESM-9100 黒Amazonで購入
I have an original xbox 360 controller. Was worried about all the third party options (bad memories from the 2000s). But my gaming mouse with sniper button is from easysmx so I trust them, even if they have a lot of sponsored reviews on youtube. My son likes the controller. I tested it on mario kart and PES and found no difference in performance to my original Xbox 360. Yuzu said the deadzone was 10% for both.. and I won a few games in PES with it so was happy :)
続きを読む
17人のお客様がこれが役に立ったと考えています
違反を報告
レビュー を日本語に翻訳する
すべてのレビューを参照します
同様の商品をご覧になりませんか？ こちらのリンクで参照ください。ゲーミングpc、ゲーミング pc
トップへ戻る
Amazonについて
Amazonでビジネス
Amazonでのお支払い
ヘルプ＆ガイド
日本語ショッピングのための言語を選択します。 日本ショッピングのための国/地域を選択します。
© 1996-2020, Amazon.com, Inc. or its affiliates