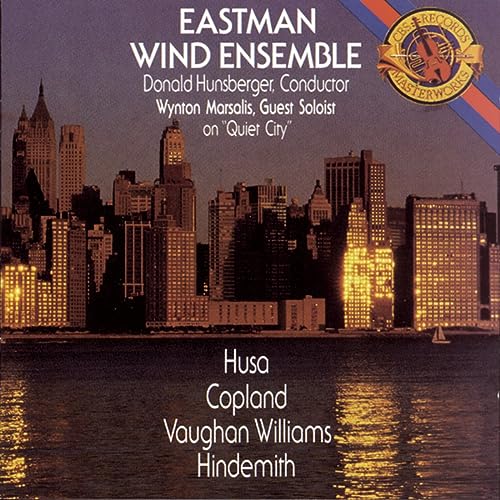 granger
5つ星のうち5.0 Sublime
2013年10月10日にアメリカ合衆国でレビュー済み
Amazonで購入
I am referring to the sound first off. This is a very well recorded CD with an excellent soundstage, clean sound, and appropriately impactful bass. In other words, this is a recording that's like being there. And what a place to be. I have another recording of Copland's Quiet City and I thought it was a nice piece of music from my favorite composer but this performance is transcendent. Hunsberger's score for band keeps the focus on the emotion in the trumpet and other wood winds. And the trumpet is so critical to this piece that having a performer of Marsalis' ability and sensitivity takes it to a whole new level for me.

I also think the Vaughan Williams music is some of his best to my ears - less edgy than his symphonies for example. Very enjoyable with his trademark other worldly harmonies. Hindemith and especially Husa are for ears accustomed to modern tonalities and rhythms. Fine in their own right and well performed but they don't take me to the same place as the other music. To put it all into perspective, the Copland piece alone is enough reason to have this CD!
続きを読む
1人のお客様がこれが役に立ったと考えています
違反を報告
レビュー を日本語に翻訳する

Markus Becker
5つ星のうち1.0 Poor manufacturing quality or even a fake?
2011年2月22日にアメリカ合衆国でレビュー済み
Amazonで購入
IMPORTANT: This review is related to the manufacturing quality of the
delivered CD. It is NOT related to the music!
I ordered this CD from Amazon.com since it isn't available in Germany.
It seems to me like a fake or at least like a very poor reissue of the
original recording. The cover does not look like it is depicted on the
Amazon.com website. It actually looks like being printed by my ten years
old ink jet printer. The most annoying thing is the "booklet" which is
actually only a piece of paper. It does not even contain the assignment
of composers to the individual music pieces, i.e., you have to guess which
work was composed by whom.
I was really disappointed when I received this CD after waiting for almost
one month.
Thumbs down for Amazon.com! Even if it is not a fake they should at least
put a remark on their website in case they're selling poor reissues.
続きを読む
2人のお客様がこれが役に立ったと考えています
違反を報告
レビュー を日本語に翻訳する

Richard Johnson
5つ星のうち1.0 Modern dissonant music
2010年4月19日にアメリカ合衆国でレビュー済み
Amazonで購入
The entire CD is a modern dissonant music played by the Eastman Wind Ensemble. If you like such music, this CD is for you. But if you love classical music by Beethoven, Mozart, Rossini, Strauss, Wagner and other great composers of the classical era, you will be very disappointed, like we are. The entire recording sounds like a high school band playing off key. It is not the fault of the orchestra, still one of the top wind ensembles in the world, but of the conductor who has very unusual taste in music. We personally detest his music selections. We would love it if the Eastman Wind Ensemble made some new recordings of marches by John Philip Sousa, which they perform so well, instead of the dissonant music on this CD.
続きを読む
違反を報告
レビュー を日本語に翻訳する
すべてのレビューを参照します