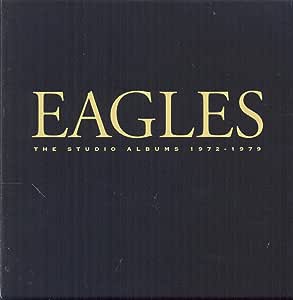 2013 six CD box set from containing all six of the Eagles' Asylum studio albums from 1972-79: Eagles, Desperado, On The Border, One Of These Nights, Hotel California, and The Long Run - all packaged in a sleek, black clamshell box, with the albums in paper mini-jackets utilizing recycled paper stock. .

Mark Barry
5つ星のうち5.0 "...The Long Run..." – The Studio Albums Collection 1972-1979 by EAGLES (2013 Warner Brothers 6CD Box Set Remasters)
2016年1月21日に英国でレビュー済み
Amazonで購入
With Glenn Frey's dreadfully sad passing this Monday, 18 January 2016 (aged only 67) – like many I’ve been playing the EAGLES 70ts back catalogue with a strange mixture of wonder and genuine loss – loving the melodies but also wallowing in many longhaired memories – songs that I pulled girls close to – and songs that even eased a heartache or two at times. I suppose it’s that all our heroes are passing...and I for one would rather they were still playing, singing and inspiring us. So I thought it would be a good idea to return to this dinky 6-album EAGLES collection that so ably sums up why these melodic Desperado's shifted so many millions of albums between 1972 and 1979. They were just so bloody good. And of course those Glenn Frey, Don Henley, Randy Meisner, Don Felder and Bernie Leadon 'harmonies' slaughtered all in their path. Here are the Sunrises doused in Tequila and the Hotels in California...

The mighty tunesmith and Bukowski-type hero Tom Waits probably made more money out of his "Ol' 55" on Side 2 of "On The Border" than he did from the royalties of his entire first two albums on David Geffen's Asylum label which went criminally unnoticed for years. Bernie Leadon's beautiful "My Man" was a tribute to Gram Parsons the leader of the Country-Rock outfit The Flying Burrito Brothers who had died in September of 1973 (only six months before the Eagles' third album was released). It's the kind of effortless warmth they often achieved in ballads – the type of song I used to play into the ground and ruminate on (deep baby deep). You can just about make out Glenn Frey's whispered "Good Night Dick" as the title track "On The Border" fades out – a caustic jab at President Richard Nixon's impending doom amidst the infamous Watergate scandal and cover-up (Tricky Dicky finally resigned in shame in the Autumn of 1974).

It's worth noting that the track "One Of These Nights" is the 'full album version' here - the cut on March 1976's "Their Greatest Hits (1971-1975)" LP (which has sold over 40 million copies worldwide) is an edit that loses the intro. For me one of the album’s strength’s (amidst a distinct lack of tunes on Side 2) was the Side 1 finisher "Journey Of The Sorcerer" – Bernie Leadon's orchestra and banjo instrumental - the BBC used it as a theme song to the TV adaptation of Douglas Adam's wonderful "The Hitchhikers Guide To The Galaxy".

Joe Walsh's wonderful "In The City" first turned up in a version on "The Warriors" Soundtrack LP in 1979 (a co-write with Barry De Vorzon who formed Valiant Records in the 60ts and penned loads of music for films and TV) – while the Grammy-winning "Heartache Tonight" was a co-write between Glenn Frey, Bob Seger and J.D. Souther. Jimmy Buffett sings on the 'silly' vocal refrains in the awful "The Greeks Don't Want No Freaks" - while ace Saxophonist David Sanborn saves the day by putting in a beautiful solo on the moving finale piece "The Sad Café".

The clamshell box pictures all six albums on the rear and inside you get singular card sleeves with no booklet. So the gatefold and inner of "Eagles" is missing, the textured feel to the front and back cover of "On The Border" isn’t there, the Embossed "One Of The Nights" front cover and it’s inner sleeve is not here, the gatefolds, inners and varying posters that came with "Hotel California" and "The Long Run" are all awol too. Shame someone couldn’t have taken a leaf from the Japanese when it comes repro artwork. However – in a nod to the period - each of the CD's label designs reflect their original design (white Asylum for the first two, Boxed Cage logo for number three and so on). They’ve even printed each album’s original vinyl catalogue number printed on the disc too. But that's it. No lyrics, no booklet, no photos, no appraisal or history – which is a damn shame. Cheap and cheerful I suppose...

The Remasters are those carried out by Ted Jensen in 1999 when the catalogue was reissued and they sound really great (always did). But it’s the consistency of the music... What hammers you time and time again as you wade through the albums is the sheer quality of the tunes – hit after catchy hit – and none of it feels maudlin or dated forty years after the event. Ok this is so American West Coast – but man is it good. Even when they made a 2CD "Best Of" compilation there a few years ago – there was still plenty of room for those album nuggets in-between the hits. I've highlighted who sang lead vocals on what – Frey and Henley getting the lion's choice – but in truth the Meisner, Leadon and Felder tracks all impress too.

What a glorious sound they made for that whole brilliant decade – and what a sad loss to music is Glenn Frey’s passing. "The Studio Albums Collection 1972-1979" is musically comprehensive, attractive to behold and sounds damn cool too – dig in, enjoy and remember him this way...
続きを読む
94人のお客様がこれが役に立ったと考えています
違反を報告
レビュー を日本語に翻訳する

DaveB
5つ星のうち5.0 Five Star Harmonies From a Five Star Unit
2018年4月2日に英国でレビュー済み
Amazonで購入
I never used to be a big fan of the Eagles but appreciated their obvious high points. Then a while ago I bought their Best Of and realised that 90% of the performances were pretty special and the recordings were top quality. I have since played that CD to death and so I thought I should give this band a better hearing by buying these first 6 studio albums. To say I was impressed is a bit of an understatement. How could I have wasted so much time before realising the quality of these albums? Doh! Not just the quality though. The consistency of composition and performance are up there with very few peers. I think perhaps this is one of those rare occurrences where the unit was greater than the sum of the parts. Clearly the Eagles were a great band and were arguably one of the best examples of West Coast rock music to my recently enlightened mind. These remasters are exceptional too, highlighting the quality of instrument and vocal recordings......and boy those wonderful smooth homogenous harmonies. Mixing different voices is a hit and miss exercise but these guys were born to harmonise together. These discs are audiophile quality too imo and the dynamics have been preserved. Yeh!
続きを読む
18人のお客様がこれが役に立ったと考えています
違反を報告
レビュー を日本語に翻訳する

Kev Edwards
5つ星のうち5.0 Very well presented, very well made, cheap at £12.99 for 6 CD's
2019年8月2日に英国でレビュー済み
Amazonで購入
I am a avid fan of the "Hotel California" album. I had the vinyl, the first CD issue, the second CD issue also the Electra Records Japanese SACD version, safe to say I love this album, apart from the " obligitory " Greatest Hits CD i have only the first album 'Eagles' on CD which I have only played the once.

The outer cellophane shrink wrap on the box is so bloody difficult to get off the 'well made' ridged matt black box with clear matt gold graphics which opens up like a book, it's tight to open for the first few times but eases.

Once you get it open inside you will find 6 single CD's in single 'stiff' matt printed cardboard which faithfully reproduces the original album sleeves.

Well worth the price, if not a ''very good bargain''

As soon as i receive a CD it gets loaded into my 4TB Seagate Expansion HDD that i use as a server for Music only. (Who Needs Spotify ? I don't) The discs are loaded into my PC via the TEAC external CD/DVD Ripper/Burner that has been speed matched to the EAC software that i use to archive the discs at 16bit-44.1kHz WAV. I do not use flac as even that compresses a CD recording and 'Yes I Can Tell The Difference'

The first Disc ''Eagles'' felt very thin and it's printed label was off centre. It loaded onto the HDD at 2.5x speed which i find the best for replay sound quality, it showed that it had to have 20% error correction added which may lower the final sound quality.

The rest of the discs have loaded onto the HDD fine with around the same amount of 'Error Correction' added.

Sound quality on the PC via my Korg DS-DAC ''upscalling to 24bit-192kHz'' is fine but nothing compared to the sound from my Audio System, Marantz SA11s3, Musical Fidelity NU-Vista 600, Bowers & Wilkins 805D3

Using Hotel California to compare the newer 2013 remasters against the second UK CD pressing from 1994, i can honestly say that an improvement is there, deeper, warmer, better detail without any harseness and no noticable vocal sibilance.

A genuine Amazon bargain worth buying, if it wasn't i would not bother sitting here for 20 minutes reviewing it.
続きを読む
5人のお客様がこれが役に立ったと考えています
違反を報告
レビュー を日本語に翻訳する

Smokey Joe
5つ星のうち5.0 Great music and great value for money
2019年4月11日に英国でレビュー済み
Amazonで購入
For the price this is a no-brainer. All of the studio albums before the group's acrimonious split at the end of the 70s in one bargain-priced package. All the albums appear to have been remastered, or at least the sound is very good indeed. All my Eagles albums were on vinyl or compact cassette tape and of course they had all disappeared long ago, so until I purchased this all I had was the greatest hits compilation. This makes much more sense I have enjoyed listening to each album on morning walks (I ripped them all to MP3 and then downloaded them to my phone). My favourite has to be Desperado - and it has really stood the test of time. A highly recommended package, in my opinion.
続きを読む
3人のお客様がこれが役に立ったと考えています
違反を報告
レビュー を日本語に翻訳する

Og Oggilby
5つ星のうち4.0 Splendid Value For Money
2014年9月12日に英国でレビュー済み
Amazonで購入
The Eagles were always a smart band; they found a way of marrying Gram Parsons' 'Cosmic Country Music' with hard-rocking values, and cleaned up, commercially speaking. Apparently their original 'Greatest Hits' album is the best-selling album of all time (Citation Needed!). This far into the twenty-first century, music - at least in the shape of compact discs - doesn't have the value it once did. For less than the price of a double CD twenty years ago, you get all of the Eagles original recorded works (give or take the odd track), in miniature album sleeves (not reproducing the original gatefolds, sadly), in a funereal black clam shell box. Seems like good value to me; listening to the albums again after a long, long time, I was surprised to find how comparatively raw the first album was, how gutsy 'Out of Control' from 'Desperado' was, and how much of this music stands up. 'On The Border' has some little gems; for example, I wonder how much Tom Waits made from the royalties of their cover of 'Ol' 55'? 'My Man', their homage to Gram Parsons, is a really sincere tribute, and even when things got really slick on 'One Of These Nights', there's still music of great quality. 'Hotel California' is excellent, too - having heard 'New Kid In Town' on the radio so many times, I never thought I could really listen to it again, but it is such a polished gem that it sounds fresh to me. 'the Long Run' isn't so good, however, and I've docked this one star because I think the packaging could be a bit better, maybe with an annotated booklet. In the end, though, it's the music that counts, and this set is chock full of very good stuff.
続きを読む
16人のお客様がこれが役に立ったと考えています
違反を報告
レビュー を日本語に翻訳する
すべてのレビューを参照します
トップへ戻る
Amazonについて
Amazonでビジネス
Amazonでのお支払い
ヘルプ＆ガイド
日本語ショッピングのための言語を選択します。 日本ショッピングのための国/地域を選択します。
© 1996-2020, Amazon.com, Inc. or its affiliates