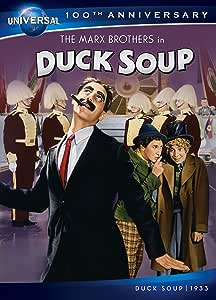 This political satire starring Groucho, Harpo, Chico and Zeppo Marx is often considered the Brothers' funniest and most popular film. After being appointed dictator of Freedonia, Rufus T. Firefly (Groucho) proceeds to bring the mythical nation to a halt by showing up late and insulting everyone at his inauguration. Hoping to oust the unfit new leader, two spies (Harpo and Chico) are sent from the neighboring Sylvania. Soon enough, war is declared between the two nations with outrageous results. So funny it earned spot on AFI's 100 Years...100 Laughs list.

I expect that this black and white1933 “classic comedy” and “biting political satire”, according to the DVD case, seemed funny many decades ago, but it has lost a lot of its appeal now.

Despite the title, this film has little to do with Ducks or Soup.

Groucho Marx becomes President of an imaginary country called Freedonia. His brothers Harpo, Chico and, the one nobody remembers, Zeppo Marx all become involved in some way or other (their even less well known brother Gummo Marx is not in the film at all). The actor Louis Calhern whose performances I liked in ‘We’re Not Married’ and ‘Annie Get Your Gun’ also appears.

In a way I am glad I watched much of this film, although I skipped some scenes in the middle. I knew the Marx Brothers were famous and the image of the leading brother Groucho Marx with his moustache, cigar and grin still has cultural resonance, but I had never seen any of their work. Now at least I know what people are talking about when they mention them.

According to Wikipedia the Marx Brothers “are widely considered by critics, scholars, and fans to be among the greatest and most influential comedians of the 20th century” and this film ‘Duck Soup’ is among their most famous, but I wonder how much of that is down to people feeling that they ought to like this because other critics say they do.

While I did not hate this film, I am in no hurry to see more Marx Brothers’ films.

Lizzie Mann
5つ星のうち5.0 Marx Bros at their best
2017年10月8日に英国でレビュー済み
Amazonで購入
In my opinion, the best of the early Marx Brothers films. It's the usual mix of Groucho's wisecracks, Harpo's physical comedy and Chicco's cheek plus moments that remind me of Monty Python. Add to that a send up of politicians (nothing really changes - listen to the lyrics of Groucho's song 'Land of the Free') all at a frenetic pace and you have something that will cheer you up no end. It has been edited roughly so sometimes the storyline is a bit jumpy but if you just concentrate on the comedy, it doesn't seem to matter.
続きを読む
3人のお客様がこれが役に立ったと考えています
違反を報告
レビュー を日本語に翻訳する

Tony Bradley
5つ星のうち5.0 Marx brothers absolute masterpiece!
2017年10月8日に英国でレビュー済み
Amazonで購入
This brilliant satire has stood the test of time exceptionally well. So much of the humour is relevant today. Groucho Marx clearly believed that leaders of capitalistic are by and large not tuned into the real world. However, the irony is, that Grouchos character, the incredibly funny Rufus T Firefly is himself clearly a couple of sandwiches short of the proverbial picnic! So many wonderful scenes in this masterpiece. The mirror scene just about tops them all. What a film! My only criticism is that we don't get to see Harpo playing the harp beautifully, or Chico playing wonderfully on the piano. Many critics felt that the musical interludes of Harpo and Chico kind of spoiled the pace of the films. My opinion differs. I believe the musical interludes provided the viewer with a chance to catch breath. Grouchos quick fire retorts and observations on life take (and took), some digesting. This is why repeated viewings of their films gives new experience to the viewer. Each gag can take on a different meaning entirely. If only they made movies like this today! Alas, I think political correctedness would censure some of the satire. A final word has to be said for the wonderful Margaret Dumont. What a foil to Groucho! And how she kept a straight face at times defies belief. I say to anyone who has not seen this film, or those unfamiliar with the Marx brothers, buy this film. You will not regret it. Never, ever fails to put a smile on my face, English and strait laced or not.
続きを読む
4人のお客様がこれが役に立ったと考えています
違反を報告
レビュー を日本語に翻訳する

LONDON NINJA.
5つ星のうち5.0 Comic masterpiece
2016年6月30日に英国でレビュー済み
Amazonで購入
This film was made the same years Hitler came to power, 1933.
Four Jewish Brothers (The Marx Bros) star in this satire on politics,
and 83 years later, it is still funny and relevant.

The reason I tell you the Marx Bros were Jewish, is because there
is an old jewish saying that says, "Humour is to be human". I don't
think Hitler had much in the way of "funny bones", and after all these
years, it is The Marx Brothers who are still loved, and the ideas and
politics of fascism, are hated. What I am getting at, is Duck Soup
will live on forever, and whenever a tin-pot dictator wants to start
a war, we have this movie to remind us how ridicules war is...
続きを読む
3人のお客様がこれが役に立ったと考えています
違反を報告
レビュー を日本語に翻訳する

Jonathan Ward
5つ星のうち5.0 Welcome To Freedonia
2019年6月15日に英国でレビュー済み
Amazonで購入
Duck Soup is a classic Marx Brothers movie and one of their biggest successes. I believe the most cleverest scene to be the pretend mirror scene where Chico copies Groucho superbly well as if the mirror really was there. Comedy genius. Hilarious humour from one of the best comedy teams of all time. Well recommended.
続きを読む
1人のお客様がこれが役に立ったと考えています
違反を報告
レビュー を日本語に翻訳する
すべてのレビューを参照します
Amazonプライム会員ならお急ぎ便、日時指定便が使い放題
さらに、映画もTV番組も見放題。200万曲が聴き放題 。クラウドに好きなだけ写真も保存可能。
> プライムを無料で試す