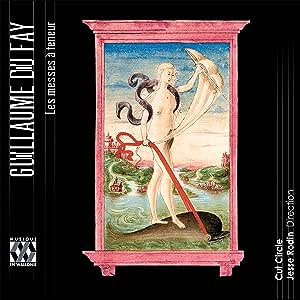 kiki
5つ星のうち5.0 Gorgeous Recording
2019年1月16日 - (Amazon.com)
Amazonで購入
For anyone who is a fan of medieval music, this recording is state of the art. Cut Circle is devoted to faithful performance practice. The beautiful booklet included with this 2 CD set is an added gift.
続きを読む
レビュー を日本語に翻訳する

Monocled gentleman
5つ星のうち5.0 The new standard for Dufay, though not perfect
2016年3月28日 - (Amazon.com)
I'd say this is the best way to get to know Dufay's cantus firmus masses. It's actually a double-CD album containing four masses and a couple of additional pieces.

The editions are by Rodin himself. He retains mixed key signatures, doesn't avoid cross relations too much, and slightly rewrites a passage in Missa "L'homme arme" at the phrase "in remissionem peccatorum". This rewrite is actually something I don't like; I suspect he found some sort of a source with the passage in that form, but honestly it's just not as good as the way in which it's usually done. Otherwise though, I think Rodin has done a great job as far as I can tell.

The chosen tempos vary, but they never plod. Cut Circle take Missa "Se la face ay pale" exactly as fast as Chiaroscuro in every movement, which is faster than other groups, and a lot faster than Diablous in Musica. I have to say I like this fast tempo, and it's great we have two so different but great performances of this mass in these tempi.

In Missa "L'homme arme", Cut Circle is faster than the Hilliards, but not as fast as Les Jeunes Solistes. Pretty much ideal to my mind. In Missa "Ecce ancilla domini", the tempo is considerably faster than that of the Ensemble Gilles Binchois, whose slow plodding tempos I'm not a fan of. I think this mass benefits from a lively, joyful tempo, even if Cut Circle doesn't quite attain the same kind of joyfulness here as Prague Madrigal Singers in their recording from the 1960s. Cut Circle's rendering is more mellow, but pleasant and pleasing and with a good pace nevertheless. Their rendering of Dufay's last mass, Missa "Ave regina caelorum" is along these lines, and the same as above could be said of it vis a vis the rendering by Prague Madrigal Singers. Not as fast or lively, but more so than Cantica Symphonia in the same mass.

The balance in all these masses is usually good, but there are moments when Rodin wants to bring out a theme or voice and ends up pretty much drowning out the others or not allowing them to be properly heard even when they, to my mind, contain more interesting melodic material. These flaws are rare enough that I don't want to take off a star from what is currently a must-have Dufay album.

The recorded sound is surprisingly good, possibly partly because of relatively close miking. The performances are apparently two-voices-per-part, which I believe is authentic for these masses (there are even moments in these masses when one part splits into two, so you need two singers there, suggesting two-per-part were intended by Dufay). Oh, and female singers are used as superius, which - though lacking historical justification - just sounds better as far as I'm concerned.

All in all, there's no excuse for not acquiring this excellent release.