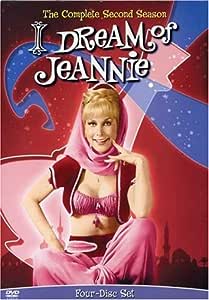 Jeannie (Barbara Eden) is even more fetching in color in the second season of one of TV's most charming and endearing fantasies. Jeannie's navel is still not ready for prime time, and her live-in relationship with astronaut Tony Nelson (Larry Hagman), the man who freed her from that bottle, is still strictly platonic. But, like any wife, she is upset when Tony forgets their one-year anniversary in the season opener. And when Tony unwittingly frees the Blue Djinn, who originally imprisoned Jeannie, it looks like he won't survive year two. Naturally, being stuck in a bottle for 2,000 years, the vivacious and playful Jeannie is more innocent and naive than her bewitching counterpart, Samantha Stevens. Her well-intentioned magic complicates Tony's life in such episodes as "My Master, the Rich Tycoon," "My Master, the Rainmaker" and "My Master, the Spy." She transforms Tony into an operatic virtuoso in "My Master, the Great Caruso," landing him in a talent show, and leading to perhaps the most versatile lip-syncing scene since the Stooges sang the sextet from Lucia in Micro-Phonies. Jeannie blinks Tony back into the Old West in "Fastest Gun in the East," on Captain Kidd's ship in "My Master, the Pirate," and back to Napoleon's court in "My Master, Napoleon's Buddy." No wonder that in "There Goes the Best Genie I Ever Had," he considers taking advantage of Hajii Day and sending her back.

Not that there aren't advantages to having a genie around the house. In one episode, she anticipates TiVo by freezing the action on a televised football game while she and Tony go out. In "The Greatest Invention in the World," she fulfills Tony's best friend Roger's (Bill Daily) childhood wish to be the funniest man in the world by turning him into the one and only Groucho Marx. And when Tony is put in charge of providing entertainment for General Peterson's anniversary party, Jeannie summons "The Greatest Entertainer in the World," Sammy Davis Jr. (at his konk-ch-konk best). The season's most captivating story arc begins in the two-parter "The Girl Who Never Had a Birthday," as Tony and Roger resolve to determine Jeannie's birthday (the date is finally revealed in "Caruso"). Through it all, poor base psychiatrist Dr. Bellows (Hayden Rorke) is constantly confounded, Mrs. Kravitz-style, by the unexplained supernatural behavior to which he is witness. I Dream of Jeannie is far from PC, but in the realm of TV's guilty pleasures, it is master of its domain. --Donald Liebenson

Barbara Eden, Larry Hagman. Jeannie is firmly implanted in astronaut Major Nelson's home and she continues to blink her way deeper into her master's heart trying to prove that love can conquer all. Includes 31 second-season episodes on 4 DVDs. 1966-67/color/9 hrs., 13 min/NR/fullscreen.