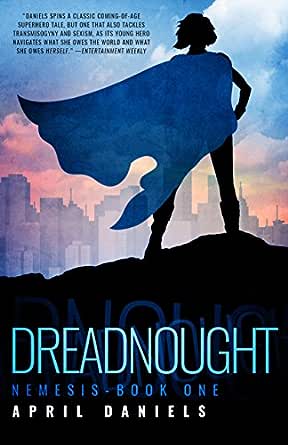 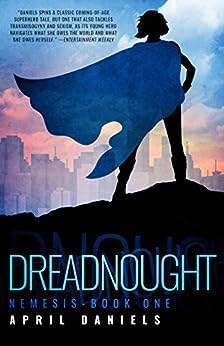 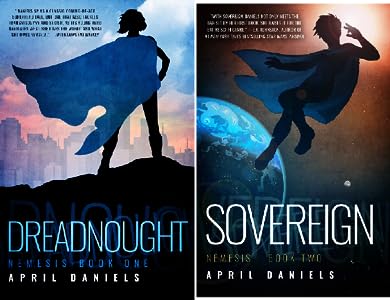 “I didn’t know how much I needed this brave, thrilling book until it rocked my world. Dreadnought is the superhero adventure we all need right now.”―Charlie Jane Anders, author of All the Birds in the Sky

“…A fascinating exploration of gender identity in a fantastical setting.”―Publishers Weekly

“This first title in the series offers a rich, unusual mix of subjects and themes for fantasy fans.”―School Library Journal

“I’m not normally a fan of superhero narratives, and then I find an exception that grabs me by the throat and makes me love it. Dreadnought is one of those exceptions.” ―Liz Bourke, Tor.com

“Dreadnought is a coming-of-age story: it’s all about Danny coming to terms with her own power and her own agency, not just as a superhero, but as a person (and as a person who chooses to be a superhero), and it’s one that doesn’t shy away from consequences, either. People get hurt, sometimes badly―sometimes killed, and it’s this willingness to highlight the fact that standing up doesn’t come without real cost that gives Dreadnought its real heart.”―Locus Magazine --このテキストは、paperback版に関連付けられています。

April Daniels graduated from UC Santa Cruz with a degree in literature. She completed her first manuscript by scribbling a few sentences at a time between calls while working in the customer support department for a well-known video game console.
She has a number of hobbies, most of which are boring and predictable. As nostalgia for the 1990s comes into its full bloom, she has become ever more convinced that she was born two or three years too late and missed all the good stuff the first time around. --このテキストは、paperback版に関連付けられています。

Okay, I knew I was excited for this one but I underestimated just how much I'd love it. Danny is a hell of a protagonist and if you think I'd lay down my life for a trans lesbian superhero you'd be ABSOLUTELY RIGHT. I really liked the way transphobia and transmisogyny were handled in this book with a complicated perspective on how heroes might not be all they're cracked up to be - and that being a 'good' person doesn't excuse your belief system. I also really, really respected the fact that Danny didn't back down. Despite her self-esteem and confidence struggles (and oh boy those are justified and well written), Danny wasn't willing to compromise on herself, her identity or her happiness for other people and I love that New Port City has a hell of an inspirational hero in the new Dreadnought. Highly recommend, and I can't wait to read the sequel.

TheAudiobookReview
5つ星のうち5.0 Loved this, and can’t wait to read more in this universe.
2017年3月27日に英国でレビュー済み
Amazonで購入
I was a huge fan of this book. Ms Daniels has done an excellent job of world building. Lots of history is laid in early with the passing of the mantle of Dreadnought to Danny. Superheros have been around for long enough for people to both love them (for saving them from super villains) and loathe them (for causing the inevitable collateral damage when they have their super fights).

When she suddenly inherits the powers of Dreadnought, our heroine, Danny, is scared people will find out at first. Not just that she’s transgender (the book opens with Danny, still biologically male, secretly buying nail polish and hiding behind dumpsters to put it on), but once she becomes Dreadnought she’s scared about her friends and family finding out.

I’m not going to pretend that I understand the emotional turmoils transgender kids go through, but I can’t help but think they’d give anything to transform as easily as Danny does in this novel. Her new body and superpowers are gifted to her by the passing of the current Dreadnought. Similar to the Green Lantern movie if you’ve seen that, where it gets passed on to Ryan Reynolds at the death of the previous Lantern.

In establishing some of the history, Ms Daniels explains the origins of Dreadnought with…

“…the British had built a warship that revolutionized naval warfare. HMS Dreadnought was faster, stronger, and tougher than anything else afloat. Overnight, it made every other battleship in the world obsolete. That’s what the first man to wear the mantle did to metahumans.”

…thus the name was taken by the first “Dreadnought” who was unrivalled by the other superheros (and villains) of the time.

The irony in all of this of course is that the mantle of Dreadnought gets passed onto someone the polar opposite of this. Someone so emotionally fragile from wanting to be something else, and from being emotionally abused by her father and from being bullied at school.

Even when physically toughened against any punishment evildoers can dish out, the emotional scars still run deep. So much so that Danny can’t find it in herself to stand up to her father even after becoming superhuman.

It doesn’t help that her father, and even a couple of the super-friends from the Legion Pacifica (basically the local chapter of superhero union) are ignorant douchebags. The real, raw emotions Danny feels when her dad is yelling at her, belittling her, is powerful stuff. Ms Daniels does a great job in these moments , making you feel Danny’s torment and pain through the words on the page.

Of course it’s not all bad news. There’s the fun of learning to control her new powers, most noticeably the ability to fly. Having only tried it out in her bedroom, she suddenly needs to work it out when representatives of the Legion Pacifica come knocking at her window.

Plus of course getting to experience the world as a female for the first time, which is something she’s wanted for a long time. There’s the bonding with her mother as they shop together for the first time for underwear and clothes to fit her new shape, but even her elation at this is tempered by needing to hide it from her father.

Doc Impossible (friendly mad scientist) of the Legion Pacifica befriends her and tries to let her know what the superhero life of a “whitecape” (the good guys) is really like. It’s not just all glamorous and sexy hero stuff, but it’s also hard on you and your loved ones. Like the day to day stuff “baselines” (non supers) take for granted like their privacy or something as simple as renting an apartment.

Early on she befriends a morally ambiguous vigilante (a “greycape“) called Calamity who helps Danny find her footing in the life of a superhero and helps her with the decision she’s struggling with: join the Legion Pacifica as a whitecape and become the next Dreadnought or live anonymously as a greycape by pretending to be less than she is.

I could bang on about this novel all day, but I don’t want to give too much away. I was very happy to see that book 2 – Sovereign – is slated for a 2017 release. I’ll be getting that when it comes out.

Sacha Black
5つ星のうち4.0 A lovely LGBT superhero story, would recommend :)
2018年11月14日に英国でレビュー済み
Amazonで購入
This book is a great example of the gestalt principle - the whole is more than the sum of its parts. There were quite a few minor nitpicky things that I felt could have been easily resolved. There were a handful of characters that were mentioned in passing that then became relevant later down the line but I'd forgotten who they were. I also felt like the plot veered off into new a direction with the Utopia finale, and I wasn't so keen on some of the comments around girls and weight. And yet, I kinda loved the book anyway. I will definitely read the sequels because I was left with a warm fuzzy feeling. I really like Danny the protagonist. And I thought the LGBT/transgender representation was beautifully done. Overall, I didn't want to put the book down, it was a compulsive read that I'll definitely recommend to friends!
続きを読む
違反を報告
レビュー を日本語に翻訳する

loulou
5つ星のうち5.0 This kid is going places
2017年11月15日に英国でレビュー済み
Amazonで購入
I was immediately drawn to care for Danny and finished the book in about 8 hours. A difficult subject to deal with and would have been easy to slip in to tired stereotypes and "larger than life" personalities.
Instead we have a teenager struggling to find her place in a world that thinks she has no place, and literally has greatness thrust upon her, and all the trials of a fledgling superhero and a teenage girl.I can't relate to the struggle of a trans teen but I don't to, because I can relate to being human and living in the world we currently live in.
Warm characters, no tip toeing around the difficult issues or absurdly unbelievable "we are all in this together, its not so bad, just smile kid" characters that always seem to appear in books to calm the troubled teen.