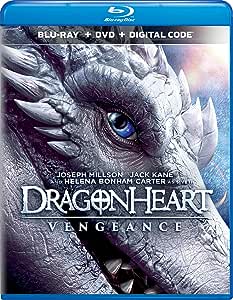 This is more of a 3.5 out of 5 but very close to 4! I throughly enjoyed this film and see it as a solid addition to the growing family of Dragonheart prequels. Please remember this is a PREQUEL to the 1996 film featuring Dennis Quaid and Sean Connery and NOT a remake.

Siveth, the newcomer dragon voiced by Helena Bonham Carter is a creation of beauty and I have to give credit where credit is do to both she as the voice actress and the animators who succeeded in creating such a magnificent creature in a low budget, direct to dvd release.

The actors behind Lucas and Darius own their roles and the story over all throws some unexpected but otherwise welcoming and refreshing twists to both the the lore of dragons and this ever growing world of fantasy.

While there is ultimately an “evil king” that must be dealt with; the story is a bit more complex than that. Which I thoroughly enjoyed. Will this win any awards? No. Some parts were no doubt rushed, but who cares! Dragons are finally making their return!

Amazon Customer
5つ星のうち4.0 not bad
2020年2月17日 - (Amazon.com)
Amazonで購入
there's alot of unexpected slapstick comedy and funny moments you don't expect for such a supposedly serious-based movie. it's almost a hybrid of fantasy & comedy. the lady screaming a one-noted, almost songlike scream for a ridiculously long ammount of time made me literally laugh out loud. i'm unsure how this has missed eye because it's actually not bad. while it's not the best out there, it was definitely interesting & worth watching. i could have done without the cheesy moments & the language not fit for the time period. i mean we don't have to go so far back we're speaking in old english, but at least use a tidbit of less-modern vocabulary. Really like the fact this story is siding with the underdogs...the dragons, the boy no one cares about, the soldier that teaches pricks a lesson and then gets some unwated attention from the authorities, etc. far too often you see mindless slaughter of beasts that appear like robots...this actually made the dragon have a mind and a heart which was a nice break from the constant demonizing of animals, both real & mythical, in movies.
続きを読む
レビュー を日本語に翻訳する

Susan
5つ星のうち4.0 Dragonheart
2020年2月8日 - (Amazon.com)
Amazonで購入
I like dragon movies, so I got it to watch. I thought it very good.
続きを読む
3人のお客様がこれが役に立ったと考えています
レビュー を日本語に翻訳する

Zdawg03
5つ星のうち5.0 Good film
2020年2月15日 - (Amazon.com)
Amazonで購入
Nothing beats the original but if you like the other Dragon Heart films then you'll like this one. They're not high quality films but I enjoy them. This time the dragon is a female dragon named Siveth voiced by Helena Bonham Carter ( Alice in Wonderland, Harry Potter, Sweeney Todd, Cinderella {live action}, Les Meserables etc.)
続きを読む
レビュー を日本語に翻訳する