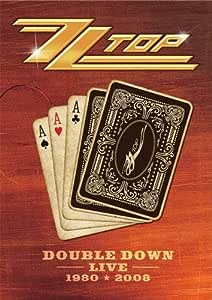 Double Down Live is a 2 DVD set from ZZ Top combining shows from 1980 and 2008. Disc one was filmed at the Grugahalle in Essen, Germany for the Rockpalast TV series. Hot on the heels of their classic Deguello album (it features 9 of the 10 songs from it) the show finds ZZ Top before sequencers and synthesizers epitomizing their lil' ol' blues band from Texas nickname. Complimented by tracks drawn predominantly from their Tres Hombres and Fandango! albums this is a true best of ZZ Top in the seventies. Disc Two was shot during their European tour in 2008 and combines great live performances, interview clips and back stage footage to create the ultimate ZZ Top on the road movie. With nearly 30years between the performances the two disc set gives a fascinating then and now insight into what has maintained the ZZ Top live phenomenon.

ianrobbo1
5つ星のうち4.0 good packaging and CD's are top quality.
2014年1月21日に英国でレビュー済み
Amazonで購入
This is a set I couldn't find easily, it contains top quality CD's in a good case, the printing is good, as is the sound quality, although it says "region 1" I found my players had no problem although I live in "region 2" I don't know if it was just my equipment or not, so suggest you check yours before buying, you wont be disappointed with the service or products from this seller.
続きを読む
違反を報告
レビュー を日本語に翻訳する

In contrast, the audio on the second DVD sounds much better: clear, balanced and Billy's guitar tone looms sweetly.
In DVD#2 The video production is higher quality but not as annoying as many reviewers stated. I liked both DVDs and think #2
has better audio quality. For certain, good ZZ material for die hard fans..
続きを読む
違反を報告
レビュー を日本語に翻訳する

Mark P.
5つ星のうち3.0 One Great Disc and One Failed Attempt
2017年3月4日にアメリカ合衆国でレビュー済み
Amazonで購入
Unfortunately I cannot rate each disc individually. I would definitely give the first disc close to a five star rating. The first disc is their 1980 Rockpalast show from Germany. I caught a few clips of this show on Youtube but could never find every song so I mainly bought this set for that concert footage. There was a lot of great playing and energy in this concert. And the filming was done well, showing the band playing their songs. Just what you'd expect from a concert DVD.
The second disc on the other hand I would give maybe two stars at the most. It is a lost of flashing back and forth of the camera from concert to photo shoots to interviews and everything in between. When I buy a concert dvd I want to see just that, the concert. Also there was so much in black and white. They must have been trying to be artsy with this video but it wasn't any art I cared to see. Also this dvd was rather short. Only half as many songs as the first disc and most of them are repeats of the first disc as well. Maybe it was just my disc or the player I was using but there were times also when it didn't seem like the sound and the video lined up just right which is super annoying to me personally. Their music is great as always but the video is just awful. So basically I paid $20 for one great dvd. If you can find just the 1980 show alone for cheaper I would recommend going with that instead.
続きを読む
5人のお客様がこれが役に立ったと考えています
違反を報告
レビュー を日本語に翻訳する

Patrick Keable
5つ星のうち4.0 Enjoyable....with caveats
2017年7月10日にアメリカ合衆国でレビュー済み
Amazonで購入
Well, their label released these side-by-side so there's obviously going to be comparisons. Their on-stage energy is greatly reduced from 1980 to 2008, they were much more lively in 1980. Their voices have suffered as well, which I guess is understandable 28 years later. Several of the tunes in 2008 are played at notiiceably slower tempos, which is much to the detriment of numbers like "Heard It on the X" and one of my favorites, "Just Got Paid". Also Dusty's bass tone in 1980 had a bit more treble to it which really helps keep the total sound fuller during the solos when you don't have a separate rhythm instrument. Enough of the criticisms though, I enjoyed both discs, though definitely the 1980 show more.
続きを読む
5人のお客様がこれが役に立ったと考えています
違反を報告
レビュー を日本語に翻訳する
すべてのレビューを参照します
Amazonプライム会員ならお急ぎ便、日時指定便が使い放題
さらに、映画もTV番組も見放題。200万曲が聴き放題 。クラウドに好きなだけ写真も保存可能。
> プライムを無料で試す