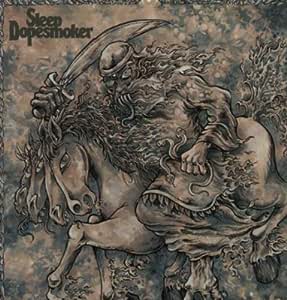 JayMadd
5つ星のうち5.0 The Heaviest Album In The Universe!
2016年4月19日に英国でレビュー済み
Amazonで購入
Clocking in at well over an hour in length isn't anything new for a rock or metal band. But when you consider this album contains only one track (stay with me, because this is in no way a bad thing), this is truly something to listen to in awe. The same band responsible for delivering the masterpiece 'Sleep's Holy Mountain' delivered the goods yet again with their marijuana-fueled opus - known as 'Dopesmoker'. Dubbed by many fans and music publications alike as 'The Heaviest Album In The Universe', it is very easy to see how it's earned this moniker right from the first listen. The album was originally released as 'Jerusalem' (which is now out of print), but the over-an-hour track was chopped up into five or six pieces and mixed terribly by the record company. 'Dopesmoker' is presented here in its entirety, exactly how the band intended it to be. Considering the stories of Sleep blowing almost the entirety of their advance from the label on guitars, amps and a hell of a lot of weed (honestly, I'm not making that up!) this is a record that deserves your attention. 10/10.
続きを読む
11人のお客様がこれが役に立ったと考えています
違反を報告
レビュー を日本語に翻訳する

😠
5つ星のうち5.0 Not for the faint-hearted
2012年8月8日に英国でレビュー済み
Amazonで購入
Sleep's Dopesmoker is an album few bands are afforded to make. Consisting of an hour plus long song it's a large deviation from the format of the very successful Holy Mountain.

For those willing to open their minds to a little experimentation in the metal realm it can be a hugely rewarding listen. However it's understandable that some people dismiss this album as overindulgent, overlong and boring.

For me it's the soundtrack to the journey that your mind will take you on, through the desert of monolithic rock and a caravan of `weedians' travelling to the holy land. Let your mind fill in the imagery and enjoy the heaviness that beams from the guitars and the groove of the drums. The repetitiveness of the riffs offers a kind of meditation to the song with breaks and deviations to stop it getting too repetitive.

How is this different to the previous two Dopesmoker releases? Well the release entitled Jerusalem has a slightly different sound (not worse to my ears, just a different mix) but it is cut short and has no bonus tracks. The out of print Tee Pee release is pretty much as this mix is including the extra version of Holy Mountain (live). The artwork on this release from Sothern Lord is excellent; however the piece done for the Tee Pee record is also rather good. It's also worth noting that since this new versions release the Tee Pee album has plummeted in price (used to sell for around forty, now can be picked up for a fiver).
続きを読む
6人のお客様がこれが役に立ったと考えています
違反を報告
レビュー を日本語に翻訳する

Jakers
5つ星のうち4.0 Like being drowned in concrete...for an hour.
2016年2月19日に英国でレビュー済み
Amazonで購入
60+ minutes of grinding stoner/doom metal!
For the first 15 or so minutes of this epic I was thinking WTF have I wasted my money on..but then the slow, downtuned riffs began to take hold and I began to enjoy this utterly ridiculous and self indulgent "composition".
It really needs to be listened to in one sitting to fully appreciate the slowly metamorphic and monstrous progression.
It reminded me of Spinal Tap's "stonehenge",not musically but in its sense of delusional grandeur.
I'm not sure that I'll be listening to this on a regular basis but I am glad I can spend and hour every now and then losing myself in some of the heaviest, most absurd but enjoyable music ever.
続きを読む
2人のお客様がこれが役に立ったと考えています
違反を報告
レビュー を日本語に翻訳する