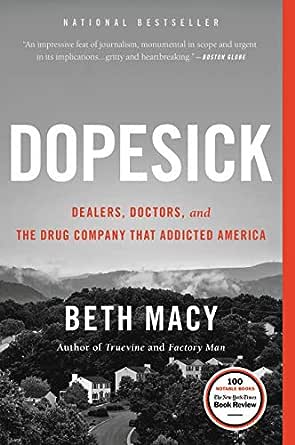 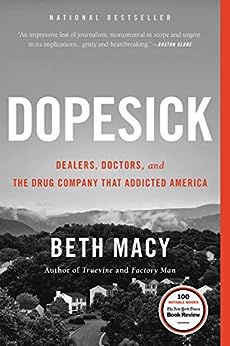 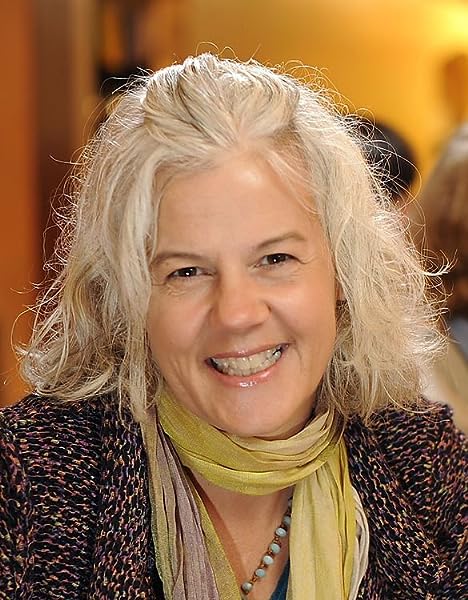 "This book is comprehensive, compassionate and forceful. No matter what you already know about the opiod crisis, Dopesick's toughness and intimacy make it a must."―Janet Maslin, New York Times

"An impressive feat of journalism, monumental in scope and urgent in its implications...gritty and heartbreaking."―Jennifer Latson, The Boston Globe

"You've probably heard pieces of this story before, but in Dopesick we get something original: a page-turning explanation."―Matt McCarthy, USA Today

"Macy has waded into a public health morass that has also become a political minefield...Macy's strengths as a reporter are on full display when she talks to people, gaining the trust of chastened users, grieving families, exhausted medical workers and even a convicted heroin dealer, whose scheduled two-hour interview with the author ended up stretching to more than six hours."―Jennifer Szalai, New York Times

"Ms. Macy focuses on southern and western Virginia, though the lessons of her narrative apply broadly...Macy embedded herself in the lives of four heartsick families whose children's lives were ravaged--and sometimes lost--because of opioid addiction...for those new to the topic there is much to learn."―Dr. Sally Satel, Wall Street Journal

"Macy reports on the human carnage with respect and quiet compassion."―Gabriel Thompson, The San Francisco Chronicle

"Macy's book reveals a more complex truth of an epidemic that has been manufactured by the players of her subtitle."
―John Warner, The Chicago Tribune --このテキストは、hardcover版に関連付けられています。

Beth Macy is the author of the widely acclaimed and bestselling books Truevine and Factory Man. Based in Roanoke, Virginia for three decades, her reporting has won more than a dozen national awards, including a Nieman Fellowship for Journalism at Harvard. --このテキストは、hardcover版に関連付けられています。

どケチ母さん
5つ星のうち5.0 A painkiller killed America
2020年1月7日に日本でレビュー済み
Amazonで購入
This book helped me understand why Americans heavily depend on harmful opioid. I still remember I was shocked to see American people, whether young or old, buying OTC/ prescribed painkiller medication like buying milk at Target. It was mid 1990s when I lived in a small college town of Midwest and just before OxyContin addiction emerged as a tragedy.
The author, Beth Macy explains the history of opioid addiction as well as geopolitical /sociopolitical causes of the prevalence so clearly that a reader like me, whose native language is not English could comprehend how and why too many deaths from substance abuse/ OD have been counted in the US.
The book is not only for American parents raising kids in drug-friendly culture, but for anyone living with Western medicine, under which painkiller/mental illness medication is overrated and over-prescribed.
No more death of young and bright Americans from OD.

thegreypanther
5つ星のうち4.0 An Eye-Opener of a Book, - Its Message Should Really Make You Think
2018年9月13日に英国でレビュー済み
Amazonで購入
Until reading this book, I was somewhat aware of the drug problem that is rampant in the United States. Mostly, however, this awareness centred on the use of cocaine and crack cocaine.
But what I hadn't been aware of was the devastation caused by the use of opioids, kicked off by the over-prescription of pain-killers. The death rate resulting from use of these drugs matches death rates from war.
Beth Macy paints a harrowing picture of folk in the grip of these drugs.
One fact that emerged from the tale that made a worthwhile comment on recent news was that legalising the use of marijuana created another problem. Drug dealers who had relied on an income from selling marijuana were forced to change to selling alternative drugs, - including opioids. Quite thought provoking.
At times the book tended to be a bit over-long, and I found myself speed reading over sections.
All-in-all, though, this book is well worth having on ones bookshelf, and it tells a grim but readable modern tale.
続きを読む
7人のお客様がこれが役に立ったと考えています
違反を報告
レビュー を日本語に翻訳する

david wright
5つ星のうち5.0 A deeply disturbing, well researched book
2019年4月14日に英国でレビュー済み
Amazonで購入
Where do I begin with this?

Firstly, I think myself very lucky to live in England with a National Health Service that has looked after us all since day one. The events in this book are incredibly heartbreaking to read and it must have been a mammoth task in itself just to commit tragedy after tragedy to print.

This book details the phenomenal rise in opioid painkillers and the abuse of the system by reps, gps and patients alike. The history detailing opium in its many forms is enlightening and gives an insight into how easy it has always been to obtain in the USA.
There are no punches pulled in the waves of grieving parents when overdose after overdose occurs so frequently that it almost becomes the norm. Gone are the stereotypes of the 'typical junkie' when the affluent neighbourhoods are flooded with Oxycontin and Heroin as the drugs of choice, and normal life is forever destroyed.
A typical extract from the book stood out as particularly harrowing when a family were checking up on their daughter who had not been in touch. Upon entering the house she was found dead on her bed from an overdose with her baby cooing on the bed beside her...
I cannot begin to imagine how difficult this must have been to write this having had to stop reading on multiple occasions due to the intense pain that comes across in this text. The author has been very fair in portraying the victims as human beings with feelings as everybody else, and the detailing of the families and communities tirelessly battling to get addiction recognised as an illness rather than be stigmatised is very well done. I can't praise this book enough for how well this has been put together and would recommend this to anybody interested in the subject of drugs and addiction - regardless of where you are from.
続きを読む
4人のお客様がこれが役に立ったと考えています
違反を報告
レビュー を日本語に翻訳する

Liam J Madden
5つ星のうち4.0 A Deep and Dark Portrayal of America...
2020年12月19日に英国でレビュー済み
Amazonで購入
Very few books have the shock and heaviness of 'Dopesick' by Beth Macy. This is a book that at times left me both bewildered and stunned throughout. The questions do arise; How did this become the epidemic that it clearly is in 2020? Why did it start? How can it be fixed? Amazingly Beth Macy manages to give astute and deep answers to these questions in, what is essentially a brilliant exploration of Opioid Addiction.
Fortunately 'Dopesick' is both well written and scoped, enabling the reader to experience the dilemma of both Heroin and Oxycontin and the connection of both becoming a recipe for disaster. This is a book that manages to convey educational character-experience and also an in-depth approach starting with addiction going back to the late 1800's.
In essence, it's an extremely well-written piece of writing that manages to not be preachy but instead is painfully honest in parts. Although not an easy going book, due to the depth of following the people who become addicted. It is however, a very useful and worthwhile read and must be admired for being so impressive when it hits it's stride. Beth Macy does a very fine job in research and following the sources. Eventually it becomes apparent that this Opioid Addiction epidemic is unfortunately not going away quickly.
If you find yourself becoming fascinated by the crisis, it seems to study and read about it, may be the only solution apart from not taking OxyContin in the first place but 'Dopesick' manages to make a very persuasive case for delving deep and becoming a dire warning for those who are sadly heavily addicted.
続きを読む
違反を報告
レビュー を日本語に翻訳する

David Gough
5つ星のうち4.0 Very hard hitting and worrying
2019年3月22日に英国でレビュー済み
Amazonで購入
I am finding it hard to finish this book because the story is so bleak and distressing. No one comes out of it with their reputations in tact. The Sackler's company Purdue Pharma pushed the overprescribing of opiates aided by many in the medical profession. Politicians did not act because the people initially involved were poorly educated and marginalised. It is a must read but don't expect to enjoy it!
続きを読む
違反を報告
レビュー を日本語に翻訳する

Kindle Customer
5つ星のうち4.0 An important look at a crisis
2019年5月7日に英国でレビュー済み
Amazonで購入
This was a great if slow read. Beth Macy gives a deeply personal look at the impact of the opioid crisis. Telling the story of victims, their families and those fighting to save them it is a harrowing read
続きを読む
違反を報告
レビュー を日本語に翻訳する
すべてのレビューを参照します
click to open popover
Amazonプライム会員ならお急ぎ便、日時指定便が使い放題
さらに、映画もTV番組も見放題。200万曲が聴き放題 。クラウドに好きなだけ写真も保存可能。
> プライムを無料で試す