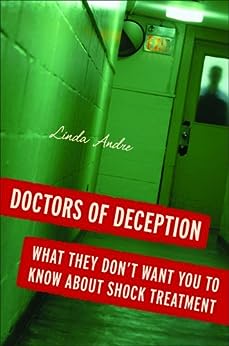 Doctors of Deception: What They Don't Want You to Know about Shock Treatment (English Edition) None ed. 版, Kindle版

"Doctors of Deception is a very interesting read, offers a detailed history of ECT's use, and immersion into one of psychology's oldest debates."-- "Psychiatric Rehabilitation Journal"

"Andre provides a useful contrast to the claims made in Edward Shorter and David Healy's recent paean to ECT and the men who were instrumental in its development, and offers a potentially devastating critique of both ECT and the modern American psychiatric profession."-- "Social History of Medicine"

"Author and activist Linda Andre has written a marvelously lucid and ably documented book that not only recounts her experiences and that of many others with electroshock, but mounts a systematic assault on the biomedical industrial complex and the willful distortions that many of its actors and servants engage in to maintain biomedical dominance and accrue benefits to themselves. In chapter after devastating chapter, Doctors of Deception describes, probes, analyzes, exposes, and deconstructs the entire electroshock industry."-- "The Journal of Mind and Behavior"

"For many years, activist and writer Linda Andre has been forcefully and cogently examining the reigning (and mostly unchallenged) professed claims and practices of our medical establishment's wizards of shock therapy. In this thoroughly-researched, pathbreaking, and essential book, the author undraws the curtains that have for too long cloaked these claims, practices, and wizards. It is a work of courage, heart, and brains. --Jonathan Cott "Author of On the Sea of Memory: A Journey from Forgetting to Remembering"

"Linda Andre's book is both a powerful memoir of her own experience as an ECT 'patient' and a documented account of the underbelly of the 'shock industry.' It raises profound questions about ECT that both psychiatry and the National Institute of Mental Health--if they want to be honest with the American public--desperately need to address."--Robert Whitaker "author of Mad in America"

"This book is absolutely fascinating and extraordinarily well-written. It is a major contribution to the current literature."--Michael Perlin "Professor of Law, New York Law School"

"This book is brilliant analysis. It is successful on many levels, including its most important task: presenting an overview of the history, safety and efficacy of electro-convulsive therapy. The book is also a masterpiece of scientific writing. Through her extensive personal and professional research, Andre explained things I had already known about ECT, but with additional clinical facts and exceptional insight. She detailed the people and places that have formed the basis for the historical foundations of ECT at the same time that she described the politics and organizations that have continued to promote ECT as a safe and effective modality."--Stefan Kruszewski MD "International Journal of Risk and Safety in Medicine"

"This superb study documents a development that is an ongoing controversy in the field of psychiatry: electro convulsive therapy (ECT) and the appropriateness of using it to treat a host of conditions. Weaving her own, often poignant, experiences with ECT into the narrative, Andre contends that ECT proponents/practitioners undercut informed consent through systemic deceit, including failure to reveal negative consequences. The audience for this excellent resource should include those who make mental health policy. Highly recommended."-- "Choice" --このテキストは、hardcover版に関連付けられています。

Linda Andre is a writer, activist, and the director of the Committee for Truth in Psychiatry. Since receiving ECT in the early 1980s, she has been an advocate for the human and civil rights of psychiatrically labelled people, particularly the right to truthful informed consent. She has been interviewed by numerous publications and media such as 20/20, the New York Times, and the Washington Post.

Linda Andre is a writer, activist, and the director of the Committee for Truth in Psychiatry. Since receiving ECT in the early 1980s, she has been an advocate for the human and civil rights of psychiatrically labelled people, particularly the right to truthful informed consent. She has been interviewed by numerous publications and media such as 20/20, the New York Times, and the Washington Post.
--このテキストは、hardcover版に関連付けられています。

Mike Driscoll
5つ星のうち5.0 Helpful book
2021年4月3日にカナダでレビュー済み
Amazonで購入
Well written and informative. I learned a lot and understand my recovery from psychiatry & ECT in a fuller context as a result.
続きを読む
違反を報告
レビュー を日本語に翻訳する

Oakley
5つ星のうち5.0 Only a survivor can tell the true story...
2019年4月18日にアメリカ合衆国でレビュー済み
Amazonで購入
Although I have enjoyed reading psychiatrist Peter Breggin's work, since he has been fighting this since the 1960s, as a survivor myself Linda finds the right words to really describe the devastation this barbaric practice creates.
There is NO good that can come from running enough electricity through a brain that would kill a person if applied to the heart. Actually, the heart bone IS connected to the head bone and one can count on losing part of it also when one's sense of peace, security, soundness and history are wiped out.
I was 14 years old when they did it to me, because I was "depressed". No one considered that I was withdrawn because of living in a chaotic, alcoholic home, and a sexual abuse survivor. No one considered that I was a good kid, no problems in school or home. What was done to me was criminal- WITHOUT EXCUSE. The "treatments", better called shock abuse, wiped out all of my childhood memories, 90%, and left me with the ravages of brain damage affecting my short and long term memory, and my capacity to learn (anterograde memory). Linda clearly gives words to the feelings, and accurately describes the shame we feel, and the lack of empathy and help available for a life of struggle.
If you do not know you can NOT trust the medical field then you are living in a fantasy world. Each individual MUST do his own research before embarking on any course of action, including any and all medical treatments. But this is NOT medical treatment. Why do neurosurgeons work fervently to eliminate seizures and the psychiatric world create them? If ANY of the extensive testing and autopsies of the past were used in the evaluation of this practice there would be NO question that it causes brain damage. Quickly, and permanently. That truth is left out of all "new" evaluations. Conveniently.
The payoff is not worth it. Ever. Causing brain damage to alleviate emotional pain is like amputating a limb to remove pain. So incredibly inhumane it defies description.
Excellent book written by a woman who can prove she had an IQ of 147 before, and 118 after this assault, but has written a wonderfully engaging book nonetheless. Thank you.
続きを読む
1人のお客様がこれが役に立ったと考えています
違反を報告
レビュー を日本語に翻訳する

MSHA
5つ星のうち5.0 Incredible Information, so well researched. ECT Must Be BANNED
2018年9月21日にアメリカ合衆国でレビュー済み
Amazonで購入
Lost a Loved One to ECT. Again and again they electrocuted her - thirteen times total. Forever gone is a sweet, kind, selfless elderly Lady. In her place is a zombie; fearful, unable to connect, to feel, to know Joy. Her reason for seeking help? No energy, severely unbalanced hormones. Their recommendation?, ECT for an elderly woman, seriously? And after the permanent brain damage? Conveniently called a 'rare' form of Parkinson's - how convenient. Who electrocutes another Human Being?
続きを読む
5人のお客様がこれが役に立ったと考えています
違反を報告
レビュー を日本語に翻訳する

alex
5つ星のうち5.0 Very informative
2016年12月11日にアメリカ合衆国でレビュー済み
Amazonで購入
I found this to be a very informative text on the subject of electroshock therapy. The author is clearly against electroshock so if looking for a neutral history this may not be your best bet, though it does show the side/history of psychiatry that many other texts may gloss over. There are many sources cited throughout the book and the author seems to know a great deal on the subject.
続きを読む
6人のお客様がこれが役に立ったと考えています
違反を報告
レビュー を日本語に翻訳する
すべてのレビューを参照します
click to open popover
トップへ戻る
Amazonについて
Amazonでビジネス
Amazonでのお支払い
ヘルプ＆ガイド
日本語ショッピングのための言語を選択します。 日本ショッピングのための国/地域を選択します。
© 1996-2020, Amazon.com, Inc. or its affiliates