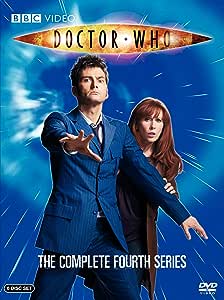 Kicking off with a jam-packed Christmas special and ending with a blockbuster extended closing installment, Doctor Who's fourth season since it was revived is a breathless, exciting one that also boasts some exceptional episodes. The ones in particular to watch out for are the outstanding "Silence in the Library/Forest of the Dead" doubleheader, the almost-single-location creepfest that is "Midnight," and the trio of "Turn Left," "The Stolen Earth," and "Journey's End" that round off the season. In the midst of those is also one of the very best cliffhangers in Doctor Who's long and glorious history.

This is also the season that introduces Catherine Tate as full-time companion Donna Noble, working alongside David Tennant's Doctor across time and space. And it's--against initial expectations--arguably the best combination since the show returned. There's no hint of romance between the pair, as they instead knuckle down to business, occasionally helped by the likes of Martha Jones (Freema Agyeman), Sarah Jane Smith (Elisabeth Sladen), and Jack Harkness (John Barrowman). And let's not forget the collection of monsters we meet this time around. The Daleks and Davros are the main attractions, while the return of the Sontarans proves to be a bit of a disappointment. But after viewing the series, chances are you'll be counting shadows around you, and wary of getting on the wrong side of the Ood.

As with most series of Doctor Who, there are one or two uneven episodes and some missteps, but the show is still unmatched at what it does, and even more confident than last time round. That, along with the immense rewatch value, is what makes this a terrific piece of family entertainment.

Hot on the heels of the acclaimed third series, Doctor Who returns for a fourth instalment with a familiar face alongside the Doctor. Award-winning actor Catherine Tate returns as the Doctor's new companion, reprising her role as Donna Noble who featured in the 2006 Christmas special The Runaway Bride. Now reunited, the Doctor and Donna travel back to Pompeii in AD 79 on the eve of the infamous eruption where people are slowly turning to stone, investigate a series of grisly murders with the help of Agatha Christie, journey to the home world of the sinister Ood and come face to face an old enemy of the Doctor's. Series Four also sees the return of the Doctor's previous companions -- the vivacious Rose Tyler (Billie Piper) and the feisty Martha Jones (Freema Agyeman).

woody
5つ星のうち5.0 I highly recommend this DVD.
2018年7月3日に英国でレビュー済み
Amazonで購入
This Dr who Series 4 DVD stars David Tenant and Catherine Tate.
Disc 1 has the Christmas Special episode Voyage of the Damned with Kylie Monroe.
Disc 2
Partners in Crime, The Fires of Pompeii, Planet of the Ood
Disc 3
The Sontaran Stratagem, The Poison Sky, The Doctor’s Daughter, The Unicorn and the Wasp
Disc 4
Silence in the Library, Forest of the Dead, Midnight
Disc 5
Turn Left, The Stolen Earth, Journey’s End
Disc 6 Doctor Who Confidential, Cutdowns
These are some of my favourite episodes. The DVD only has English Subtitles. They are a total pain to put on. You have to use Disc Menu not Top Menu in order to access the subtitles correctly. The picture quality is very good and am very pleased with it.
The DVD was made in 2008. The Episode titles are on the disc and you are given a small printed Episode Guide. When you play the disc it just says Episode One, Episode Two, etc and doesn’t give the titles which is a bit of an inconvenience, as you have no idea which episode is next. The way round it is to have the episode guide handy.
Overall, I am extremely pleased with the delivery of the DVD, it arrived well before the delivery date and in a well wrapped condition. I read a review which said they never now buy a new DVD but only buy used ones. I bought this Dr Who DVD second hand and it looks like new and works perfectly. At £13.99p it was very good value for money.
続きを読む
4人のお客様がこれが役に立ったと考えています
役に立った
フィードバックを送信中...
フィードバックをお寄せいただきありがとうございます。
申し訳ありませんが、お客様の投票の記録に失敗しました。もう一度試してください。
違反を報告
レビュー を日本語に翻訳する

Scaroth, Last of the Jagaroth
5つ星のうち4.0 Jenny Who?
2011年4月18日に英国でレビュー済み
Amazonで購入
I couldn't decide whether to give this four or five stars - I would say that I liked this series a lot but to say I 'loved' it would be a bit too gushing. In terms of the new series' I would rate it as better than series' Two and Three but not as good as Series One or Series Five.
Right from the off this series of Doctor Who sets out its stall as the one that wants to give its audience as much variety as possible, but it also aims to be both epic classic 'Who' and accessible to new viewers; no mean feat!
The re-introduction of one-off companion Donna Noble left fans and press highly dubious but proved to be a masterstroke from 'show-runner' Russell T Davies. The scene where Donna and The Doctor become reacquainted is simply genius; Catherine Tate's comedy timing and David Tennant's wide-eyed charisma prove to be comfortable bedfellows, and despite the saccharine cuteness of the (clearly commercial) Adipose, the series opener is lightweight but pitch-perfect.
The series then goes from strength to strength; Davies knowing exactly which ingredients to re-use (The Ood for example) and guiding the series to a shattering climax with the return of an iconic adversary and the death of at least one series stalwart.
The Vespiform and The Doctor's meeting with Agatha Christie are other series highlights, while guest stars of the calibre of Tim McInnerney and Christopher Benjamin - not to mention the gorgeous Georgia Moffett (daughter of Peter Davison and mother of David Tennant's child) as the feisty Jenny, making a Whoniverse-shattering appearance in episode six...
The box set contains various other treats for fans, such as Tennant's on set video diaries, commentaries from cast and crew, the superb 'Time Crash' from 2008's Children in Need, plus the Christmas special 'Voyage of the Damned', which stars Kylie Minogue and bridges series' Three and Four.
Overall a tasty and rewarding package that should please fans old and new alike.
続きを読む
役に立った
フィードバックを送信中...
フィードバックをお寄せいただきありがとうございます。
申し訳ありませんが、お客様の投票の記録に失敗しました。もう一度試してください。
違反を報告
レビュー を日本語に翻訳する

slimmer_mama
5つ星のうち5.0 Well loved
2015年12月22日に英国でレビュー済み
Amazonで購入
Bought these second hand from a reliable seller "Zoverstocks" which I used for all six series. With just a small crease, or a small mark, paid very little in comparison to new. Will be loved by my husband and kids for christmas. I never buy new DVDs now. With Amazon's great returns policy I've learned to save pounds and my relatives don't care - as long as they can see their favourite programmes and films they don't care about the tiny wear and tear on the box !!
続きを読む
2人のお客様がこれが役に立ったと考えています
役に立った
フィードバックを送信中...
フィードバックをお寄せいただきありがとうございます。
申し訳ありませんが、お客様の投票の記録に失敗しました。もう一度試してください。
違反を報告
レビュー を日本語に翻訳する

MB
5つ星のうち5.0 Great sesaon!
2015年9月24日に英国でレビュー済み
Amazonで購入
I must admit that Rose and Ten are my favorite paring when it comes to the doctor and a companion, but Donna is also a truly wonderful character. She is truly his mate and I think this season is really good with many memorable episodes. One thing I like with this season is watching Donna "grew" from the person she was before to a much stronger and secure person towards the end. And, that is why the ending of their partnership is so devastating.
続きを読む
1人のお客様がこれが役に立ったと考えています
役に立った
フィードバックを送信中...
フィードバックをお寄せいただきありがとうございます。
申し訳ありませんが、お客様の投票の記録に失敗しました。もう一度試してください。
違反を報告
レビュー を日本語に翻訳する
その他の国際レビューを読み込む

DeltaStace
5つ星のうち5.0 Doctor Who Series 4
2011年1月9日に英国でレビュー済み
Amazonで購入
I got this series for Christmas to try and complete the whole set. I love David Tennant as Doctor Who (he is the best). This is brilliant after watching the acclaimed third series, Doctor Who returns for a fantastic fourth series with a familiar face alongside the Doctor. Award-winning comedienne Catherine Tate returns as the Doctor's new companion, revisiting her role as Donna Noble who featured in the 2006 Christmas special The Runaway Bride. Martha Jones - who left the Doctor at the end of Series Three to break the unrequited circle of love she felt for him - will also return. The Sontarans and Ood are set to reappear. Its a brilliant DVD watched over and over and over again. Recommended
続きを読む
役に立った
フィードバックを送信中...
フィードバックをお寄せいただきありがとうございます。
申し訳ありませんが、お客様の投票の記録に失敗しました。もう一度試してください。
違反を報告
レビュー を日本語に翻訳する

Zoe
5つ星のうち5.0 One of the Best!
2018年3月3日に英国でレビュー済み
Amazonで購入
This is one of my favourite seasons Doctor Who, and certainly my favourite with the spectacular David Tennant as the Tenth Doctor, along side his hilarious companion played by Catherine Tate. Tears, laughter, familiar faces, and a whole lot of drama. No hesitation to buy this product, and I’m not disappointed :)
続きを読む
1人のお客様がこれが役に立ったと考えています
役に立った
フィードバックを送信中...
フィードバックをお寄せいただきありがとうございます。
申し訳ありませんが、お客様の投票の記録に失敗しました。もう一度試してください。
違反を報告
レビュー を日本語に翻訳する

Who would have guessed that Catherine Tate was such an accomplished dramatic actress? She certainly rounds out and humanises the character of Donna Noble, who was rather 'annoying' and shrill in the Runaway Bride Christmas special.

Deighan22
5つ星のうち5.0 Best series to date
2012年2月24日に英国でレビュー済み
Amazonで購入
David Tennants last full series in the tardis and it's the best one yet. The story builds up to a jaw dropping climax in which it seems like all previous series had been building up to it.

Catherine Tate is without a doubt the best of the modern companions. All notions of love interest are thrown out the window and what we get is the basic doctor/companion relationship more like the original series. The scripts are funny and original. We also get to see the return of all the modern companions and one of the best baddies that the series has produced, Davros.

Scott Mcneil
5つ星のうち5.0 Brilliant
2009年12月21日に英国でレビュー済み
Amazonで購入
The last full series to star David Tennant as the Doctor was in my opinion the best- and even better on second viewing on DVD.
When Catherine Tate was announced as the new companion there was groans from Who fans everywhere. Her shouty performance in Runaway Bride had not given fans much confidence. But Series 4 of new Who is simply brilliant. Donna is a match for the Doctor and (for once) is not remotely interested in "mating" with her new best mate. some of the epsiodes, such as Turn Left, Silence in the Library/Forest of the Dead and Midnight are among the best ever Who.
The DVD has the usual extras- commentary from all the gang, video diary and the likes, but it is the stories themselves and the knowledge it is the near the end for Ten's reign that make this a must buy DVD.
続きを読む
1人のお客様がこれが役に立ったと考えています
役に立った
フィードバックを送信中...
フィードバックをお寄せいただきありがとうございます。
申し訳ありませんが、お客様の投票の記録に失敗しました。もう一度試してください。
違反を報告
レビュー を日本語に翻訳する

Sci-fi worm
5つ星のうち5.0 Great Set
2010年8月31日に英国でレビュー済み
Amazonで購入
David Tennant is my favourite of the modern Dr Who's & this his last proper Dr Who series is really good. I wasn't sure about Catherine Tate as his assistant as I wasn't that keen on her Christmas special - but the charater really grew on me as the series progressed, the humor of the series made it that bit better for me, that & the fact that there were for me no really duff episodes in this series as we have had in past ones.
続きを読む
役に立った
フィードバックを送信中...
フィードバックをお寄せいただきありがとうございます。
申し訳ありませんが、お客様の投票の記録に失敗しました。もう一度試してください。
違反を報告
レビュー を日本語に翻訳する