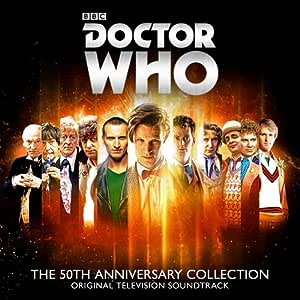 UK four CD set. 50 years. 11 Doctors and 129 tracks. This is the release that Doctor Who fans worldwide have been waiting for, assembled after years of research and trawls through dusty archives and libraries. It's a comprehensive overview of the very special music that has accompanied the Doctor over his travels through time and space from William Hartnell in 1963 to present day Matt Smith. From Ron Grainer's iconic theme realized by the BBC Radiophonic Workshop's Delia Derbyshire to Murray Gold's orchestral tapestries, this is a musical saga of monumental proportions. The esteemed collection of composers featured include Tristram Cary, Brian Hodgson, Wilfred Josephs, Dudley Simpson, Geoffrey Burgon, Paddy Kingsland, Roger Limb, Malcolm Clarke, Keff McCulloch, Dominic Glynn, John Debney and many more. The lavish 20 page booklet with the set includes liner notes from Doctor Who composer Mark Ayres on the history of music in the series and details of the episodes.

Archive Television Musings
5つ星のうち5.0 Musical adventures in space & time
2013年12月10日に英国でレビュー済み
Amazonで購入
Doctor Who - The 50th Anniversary Collection is a four CD set comprising some of the best music and effects from the complete run of the series. Although some of the material has been released before, on the Doctor Who at the Radiophonic Workshop releases for example, since those CDs are now deleted and command high prices, this is a cost effective way to get a good overview of the programme's different musical styles over the last six decades.

Disc One covers the first three Doctors, from 1963 - 1974. The first pleasing thing to note is that several pieces of stock music have been included, so we have "Three Guitars Mood" (the Shadows-like instrumental heard on Susan's radio in the first episode) and "Space Adventure Part 2" (used on the early Cyberman stories) amongst others.

There's not a great of deal of original music from this era that still exists (sadly most of the tapes would have been wiped or destroyed immediately after the music was overlaid onto the programme) but the little that we do have is still of great interest - Tristram Cary's haunting electronic soundscape for the first Dalek story and Don Harper's Bond-like score from The Invasion are highlights from the 1960's whilst Dudley Simpsons early 1970's electronic output is represented with The Mind of Evil and The Claws of Axos.

Another highlight of disc one is a five minute suite from The Sea Devils (Malcolm Clarke's score for the 1972 story). This music has long divided opinion, some rate it as not only a great Doctor Who score but also as a fine piece of experimental electronic music, whilst others regard it as just discordant noise. I love it, but it can be a bit much to listen to it all in one sitting, so these edited highlights (originally released on the 1983 album Doctor Who - The Music) are a good way of sampling the best bits.

Also included on the first CD are plenty of sound effects, which are nice to have but probably not the sort of things that will get replayed very often. There's only so many times you can listen to Chumbley (Constant Run) and Chumbley at rest, for example.

The most eye-catching things on Disc Two are two Tom Baker-era Dudley Simpson suites. I wasn't aware that any Simpson clean soundtracks from this era existed, so a six minute suite from The Android Invasion and five minutes of music from The Invasion of Time were both highlights for me.

The second half of Disc Two spans 1980 - 1984. From 1980 onwards, clean soundtracks exist for virtually every episode so there's an embarrassment of riches to chose from. The amount of material that could be included does mean there's not room for everything, so one of the best scores of this era (The Leisure Hive) is represented by just one track and Jonathan Gibbs' excellent score for The Kings Demons isn't included at all. But there's still some very good material here, and hopefully the complete scores for these stories will surface on their own releases in due course.

Disc Three concludes the original run of the series from 1984 - 1989 as well including tracks from the 1996 TV movie. Given my disappointment that Jonathan Gibbs' score for The Kings Demons didn't make the cut it's good to see that one of his other scores - The Mark of the Rani - has made it, and this, along with Peter Howell's strident music from The Two Doctors are highlights of the third disc. And as mentioned, excerpts from the TV movie score by John Debney are included, so a tip of the hat to Silva Screen for making the effort to licence this.

Disc Four brings the story up to date with a selection of Murray Gold's music from the 21st century incarnation of the programme. It's a good sampler of Gold's music - although it's more slanted towards recent series - with only one track from each of the 2005 and 2006 series for example.

Given there's only four discs (and maybe devoting one to Gold was a little generous, though understandable given the profile of the series at present) there's not room to include everything that deserves to be here but it's still a really good snapshot of the programme's music and sound effects. There were many reasons why Doctor Who was and continues to be the success it is, and a major part is due to the music. From Tristram Cary to Dudley Simpson to the BBC Radiophonic Workshop and onto Murray Gold (and of course, many others) this CD is a fine celebration of their work.
続きを読む
48人のお客様がこれが役に立ったと考えています
違反を報告
レビュー を日本語に翻訳する

OJG
5つ星のうち4.0 A musical celebration of the past fifty years!
2018年3月29日に英国でレビュー済み
Amazonで購入
The 50th Anniversary soundtrack faces the difficult job of condensing fifty years of Doctor Who's music onto just four discs (you can tell why they released a limited 10-Disc edition!). However this compilation does an admirable job of picking the best from the start of the William Hartnell era, all the way up to the Matt Smith era and Murray Gold's music. If you're someone who likes making their own Doctor Who stories, such as the Figure Adventures you can find on YouTube, then this album is a dream as it features the very best incidental music and motifs used throughout the show. It doesn't feature every single bit of music from the show, and while sometimes this can be down to copyright issues, other times it's simply because the less impressive music has been omitted (thankfully there's none of Carey Blyton's score on here).

The only drawback to this album that I could see, is that some of the tracks do comes across as ancillary music or simply just sound effects, and on the whole, there are quite a few tracks here that you probably wouldn't listen to casually. This is only a minor drawback however, and there's still more good than bad here. To finally see music such as the Cyberman theme from 'The Tomb Of The Cybermen' or the chase music from the TV Movie available commercially, is reason enough to get this compilation, and it deserves a place on the shelves of any Doctor Who fan.
続きを読む
1人のお客様がこれが役に立ったと考えています
違反を報告
レビュー を日本語に翻訳する

The Bodgering One
5つ星のうち5.0 Holy moly!
2019年8月27日に英国でレビュー済み
Amazonで購入
Where on earth (or other planets) do you start to write a review for a collection spanning 50 years?! I could sit here all day reviewing this item but sadly there is just never enough time.
This collection is a must-have and completely brilliant. It is so wonderful to see the evolution of the music used in the show over a very long history; the composers not afraid to experiment and make new sounds.
The different variations of the world famous theme tune are all here and each one a different take reflecting their eras.
I cannot recommend this enough and certainly took this listener on a beautifully nostalgic journey!
続きを読む
違反を報告
レビュー を日本語に翻訳する

Mr. P
5つ星のうち5.0 A worth addition to any soundtrack collection
2016年4月18日に英国でレビュー済み
Amazonで購入
A wonderful 4-dicc compilation of incidental music from across the 50 year run of "Doctor Who". There are some real gems on here from the Hartnell/Troughton era and some great 80's electro synth tracks from the Davison/Baker era too.

Disc 4 contains music from the recent rebooted series - so if you've already got Murray Gold's soundtracks from series 1 onwards you probably won't bother listening to this disc. However, disc 3 does contain various tracks from the 1996 TV movie (which I've been after for a while) so it's well worth getting for that alone. The set comes as a standard plastic case 4 CD set with a colour printed booklet giving a breakdown of the various tracks on each disc (including composer information and stories it's taken from).

Well worth getting if you're a fan of the show or a collector of TV & movie soundtracks.
続きを読む
違反を報告
レビュー を日本語に翻訳する