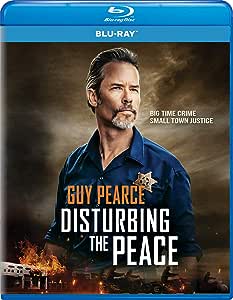 TheGhoststarOriginaL
5つ星のうち3.0 EVERYTHING YOU NEED IN A T.V. BIKER MOVIE FROM THE EARLY 1990's !!!
2020年1月19日 - (Amazon.com)
Amazonで購入
First,... what the heck was Guy Pearce thinking
to accept this role,... he needed to get a paycheck,..?
The script is horr, horr, Horrrrrible !!! The acting is terr, terr,
Terrrrrible !!! The production quality and cinematography,...
both, straight from the U.S.A Network weekend movie circa 1993 !!!
On a positive note, the entire female cast is extremely fit and attractive !!!
This film did bring back some joy of cheesy action flicks with bad gun-fire sounds,
but you would have to have memories of action cinema from the late 80's early 90's
to fully appreciate the ' I CANT BELIEVE GUY PEARCE IS IN THIS ' quality this film provides !!!
FUN RENTAL !!! 2-STAR film 1-STAR addition out of respect for the Guy Pearce brand = 3-STARS !!!

Joseph McCarthy
5つ星のうち2.0 YOU GOTTA BE KIDDING ME
2020年2月23日 - (Amazon.com)
Amazonで購入
I Had no problem with the acting. I really liked the small town visuals. But this movie treated us viewers like we were the village idiots. The sheriff is in a really bad situation with all the biker guns pointing at him, when they had the drop on him out on the corner. He fights back, gets one of the biker shotguns and runs down a back street. What does he do? He throws away the shotgun into a dumpster. You have got to be kidding me. I know he hung up his guns years ago, but come on, this is an emergency. People are depending on him for their safety.

Right after tossing the shotgun, he runs into the back of a building and does a MacGyver trick by rigging a homemade bomb, in minutes, with a pipe wrench and wire and who knows what else. He rigs it to the door and blows up a biker. Oh, it's okay to kill a bad guy with a bomb but not a gun? Dumb!

Another thing, the whole time the heist and shoot outs are going on, there is no one around. There are so many businesses and stores but no owners or customers. The entire town is deserted. Where is everyone. It's like the only people who exist are the people from the bank and the restaurant.

One of the bikers is an ex-Marine. The sheriff gets him into the jail cell. The other bikers storm the jail and the sheriff decides to trust the Marine and hands him a loaded shotgun just because "once a Marine always a Marine" and the Sheriff also served in the Marines. I really thought for a second, when the biker Marine stood up to take the gun, he was gonna salute the sheriff. In fact, I bet he did and they cut that part out in editing.

Anyway, before that, the Sheriff came to his senses and went home to get his gun that he held onto for ten years. He never used it or any other gun for a decade because, as a Texas Ranger, he accidentally shot his partner. Why keep the gun that killed your partner for ten years? Just in case bikers raid your town? Or is it a sick souvenir? There is so much unbelievable stuff in this movie that I wished I hadn't wasted six dollars on renting it,

Here's another one: The armored car arrives at the bank. One guy gets out and goes into the bank. The bikers bring him out at gun point. They tell the driver to get out or they'll shoot his partner. He doesn't get out. They shoot his partner right through this big bulletproof vest he is wearing. You see the bullets hitting it. He's dead. They tell the driver, through the bulletproof windows, that he has two options, get out of the armored car and live, or stay in and die. This is so goofy because the third option was to simply drive away. The second he saw his partner was dead he could have burned rubber.

The bikers have the people from the restaurant and bank held captive in the church. They decide that they will have to kill them because they saw what the robbers look like. There's about ten hostages. Instead of just shooting them, they come up with the brainy idea to hook up three containers of gasoline to the gas meter on the outside wall of the church. Wow. Really? Like a gas explosion of that magnitude won't attract major attention from other people in the town, or the County for that matter? Ridiculous.

I don't remember seeing any movie theater in the town but the sheriff is standing in an alley and there are three posters for westerns behind him. Guess what, his girlfriend comes riding on a horse. gets off and gives him the horse and a rifle her "Daddy" used to own. This happens in front of the posters. His girlfriend escaped from the church and left the town so she could go home and get the horse and the rifle for the sheriff who already had access to his own gun and many automobiles. He gets on the horse and chases the ringleader who is trying to escape on a dirt bike because his Hog wouldn't kick over. The sheriff is galloping down the street, shooting the rifle with one hand and holding onto the saddle with the other. He blows out the back tire of the dirt bike.

The first fist fight of the movie occurs between one biker and the waitress in the restaurant. You got to see it to believe how silly it looks. I could keep going, on and on, about the lack of intelligence and common sense this film projects. There's just no credibility to this movie. How dumb can a Director be.
続きを読む
レビュー を日本語に翻訳する

stacie travis
5つ星のうち1.0 0 Stars! It's TERRIBLE!
2020年1月27日 - (Amazon.com)
Amazonで購入
Very cheaply made movie not worth the money to even rent nor worth the time to watch. It's awful. I am from Kentucky and live 8 miles away from the town it was shot in and this movie sucks! It make our town and state look even more backwards. 🤦‍♀️ If I had the option I wouldn't had give it even one star. It deserves 0 stars!! Our state police and police departments are way better than this.
続きを読む
レビュー を日本語に翻訳する

Denise D.
5つ星のうち1.0 Beyond bad...in every way
2020年1月22日 - (Amazon.com)
Amazonで購入
Let's see, the acting was worse than a jr. high musical. The writing was straight out of Hazzard County. The directing was so bad that a stoner with a cell phone camera and a comic book could have done better. I feel bad for Guy Pearce because he is a good actor but this was so very, uber, hyper, super awful. I muscled my way through 2/3rds of it and just had to stop it for fear of contracting some form of visual stupidity complex. Wow. A real stinkaroo!
続きを読む
1人のお客様がこれが役に立ったと考えています
レビュー を日本語に翻訳する

50BMG
5つ星のうち1.0 Terrible
2020年1月24日 - (Amazon.com)
Amazonで購入
This is one of the worst movies I have seen in years. The script is terrible. The set must have cost about $5 and the acting is .... well terrible. If I could ask for a refund I would.
続きを読む
1人のお客様がこれが役に立ったと考えています
レビュー を日本語に翻訳する
Amazon.comのカスタマーレビューを見る(23) 5つ星のうち1.9
Amazonプライム会員ならお急ぎ便、日時指定便が使い放題
さらに、映画もTV番組も見放題。200万曲が聴き放題 。クラウドに好きなだけ写真も保存可能。
> プライムを無料で試す