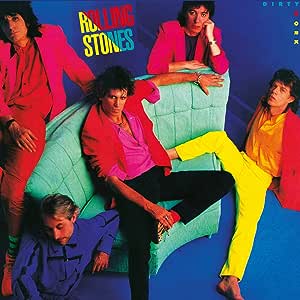 The Punk Panther
5つ星のうち3.0 I let somebody do the dirty work....
2018年6月18日に英国でレビュー済み
Amazonで購入
Widely considered by most to be the worst Rolling Stones album, by far. It had a lot going against it - a fractured band with its main protagonists pretty much functioning independently of each other, even mild-tempered Charlie Watts falling out with Jagger, a musical trend at the time of synthesisers dominating everything and, yes, a bloody awful cover.

Let me try and "accentuate the positives" with this review. It is had too much negativity over the years, probably correctly, but oh well, here goes.

"One Hit To The Body" is a rousing, impressive opener employing that old acoustic/electric guitar riff intro again and some impressive guests like Led Zeppelin's Jimmy Page, Bobby Womack, Patti Scialfa and Kirsty McColl. It is as good as anything on "Emotional Rescue" or "Undercover" to be fair. "Fight" is a bit more of a Stones-by-numbers track with Ronnie Wood on bass (unusually), it is lyrically bland but has a killer riff opening and "Harlem Shuffle" is a totally convincing cover of Bob & Earl's 60s soul hit. Excellent vocal and general sound on this. Nothing wrong with it at all.

"Hold Back" is a pounding drum attack rock number and is redeemed by another energetic Jagger vocal, as indeed is "Winning Ugly", whose synthesiser riff is also rescued by a funky bass and drum underpin taken, in my view, from Don Covay's Northern Soul number, "It's Better To Have (And Don't Need)". Strangely, Covay appears on this album on backing vocals on "One Hit" and "Sleep Tonight". Maybe he had some input? Jagger also attacks this enthusiastically, going falsetto in places again. Keith Richard's obligatory reggae number. "Too Rude", is enjoyable too. I always like these. Jimmy Cliff appears on backing vocals.

"Back To Zero" has a delicious funky intro and, yet again a good Jagger vocal. The guitar and drums are great on this and, yes, it is a good track. Hints of dub reggae in its skanking guitars in places too. This would have sounded great on "Undercover", with its political undertones about the world's impending meltdown. Ronnie Wood's bass on this, again, is impressive. You know, Im enjoying this re-listen quite a lot... This is possibly the best track on the album.

The title track is pretty much a typical mid 80s Stones cut. It is ok, but that's about it. If you like The Stones you can listen to it and there are good parts, the chorus is catchy. A lot of people have moaned about the 80s drum sound on tracks like this, and, although it is a loud attack, at least they are proper drums and not a drum machine. "Had It With You" features Ronnie Wood on saxophone, would you believe, but a lazy vocal and general unremarkableness pervades. A blues-inflluenced "bridge" sounds pretty terrible, to be brutally honest. Probably the album's low point. Richards' affecting low-key ballad "Sleep Tonight" finishes things. Good old Ronnie is now, unbelievably on drums, not very impressively and Keith's vocal is unsurprisingly laconic.

Yes, it probably is their worst album, but, as a Stones fan, I will try to derive something from it and the occasional forty minutes listening to it every few years is enjoyable enough.
続きを読む
4人のお客様がこれが役に立ったと考えています
役に立った
フィードバックを送信中...
フィードバックをお寄せいただきありがとうございます。
申し訳ありませんが、お客様の投票の記録に失敗しました。もう一度試してください。
違反を報告
レビュー を日本語に翻訳する

Sir Steven
5つ星のうち4.0 An often overlooked gem in the Stones catalogue
2013年4月19日にカナダでレビュー済み
Amazonで購入
This album, as stated, is often overlooked in the grand scheme of the Stones discography. It may take some people a few listens to warm up to this offereing, but if given a chance this album shouldn't dissapoint. The key tracks here are the "hits" or singles that were realeased at the time. "One Hit (To The Body)" & "Harlem Shuffle" are excellent tunes that are as strong as some of the material from the 70's. The rest of the album has a couple of hidden songs that warrant further listening. "Fight" is a catchy tune starts off at full speed and doesn't stop. "Winning Ugly" has some of Bill Wyman's best bass lines. The bass lines are actually pretty prominent in this tune, which is not a bad thing.
The only weak link in this set is "Too Rude". It's a pseudo raggae number that is nowhere close to similar raggae numbers in the 70's. As a matter of fact the song is pretty awful and should have been dumped out altogether.
Overall a really good effort that I have grown to enjoy more over the years.
続きを読む
2人のお客様がこれが役に立ったと考えています
役に立った
フィードバックを送信中...
フィードバックをお寄せいただきありがとうございます。
申し訳ありませんが、お客様の投票の記録に失敗しました。もう一度試してください。
違反を報告
レビュー を日本語に翻訳する