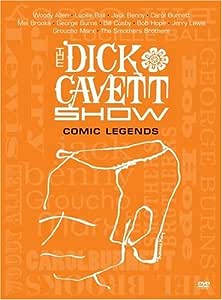 840 minutes (that's fourteen hours, including various bonus features). Four discs. Twelve shows. Eleven famous guests. The Dick Cavett Show � Comic Legends boasts some big numbers, but what it doesn't have, surprisingly, is a whole lotta laughs. The lineup is certainly impressive, from old school stalwarts like Groucho Marx, Bob Hope, Lucille Ball, Jack Benny, and George Burns to relative youngsters (at least at the time; the shows were recorded from the late '60s to the mid-'70s) like Bill Cosby, Woody Allen, and the Smothers Brothers. But this is not a procession of mirth-meisters coming out and doing five or ten minutes of one-liners and standup shtick. There are no performances, per se; like guests on Leno, Letterman, or any other TV talk show, the "legends" converse with and are interviewed by the host, sometimes by themselves, sometimes in the company of other celebs. This casual format yields decidedly mixed results. Take Groucho. Pushing 80 at the time of the first of his two Cavett appearances included here (in 1969), he's sharp and witty, telling many stories, offering up a few good lines ("I liked Perry Como's singing, when he was awake"), even warbling a song or two. But his '71 appearance, in which he reveals himself to be a testy old curmudgeon, railing against nudity in movies and feminism ("As long as women are willing to take alimony, they have no right to women's lib") and unwilling to cede the limelight to anyone else (Cavett's conversation with author Truman Capote is ruined by Marx's refusal to shut up), is tedious at best. Cavett fawns over Hope, who tells some nice anecdotes but, in the absence of his writers, simply isn't very funny; nor is Lucy, whom Cavett describes as "a tough, hardened showgirl." But Jerry Lewis is a riot, peppering the conversation with his trademark mugging and slapstick and engaging in an entertaining Q&A with the studio audience; Mel Brooks is manic and motor-mouthed; Benny's deadpan routine, including the usual zingers about his age, cheapness, and bad violin playing, is charming; and Cosby, then in his mid-thirties and years away from becoming the sweater-wearing sage of The Cosby Show, is hip and relaxed in the presence of Cavett, who at other times comes off as stiff and ill at ease. Meanwhile, other guests range from veteran actress Ruth Gordon and cheeky film critic Rex Reed to the two sullen young stars of the film "Zabriskie Point," who manage to bring the proceedings to a grinding halt. Bonus features, as is the case with Shout Factory's various other Cavett compilations, include Cavett's new introductions to each show, along with interviews, outtakes, and more. --Sam Graham