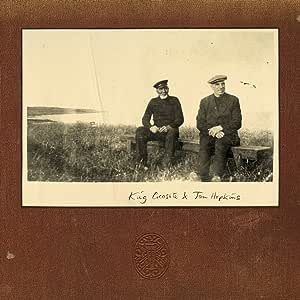 Diamond Mine features lyrics and vocals from King Creosote (Fence Collective member and Scottish music wellspring) with music by Jon Hopkins (composer, studio wizard and Eno collaborator). It's a true labor of love, recorded over several years, whenever Jon and KC could get together. The result is a suite of emotion ranging from cracked despair to patched-up euphoria. Described by King Creosote as a 'soundtrack to a romanticized version of a life lived in a Scottish coastal village, the record weaves in slices of life, bike wheels, spring tides, tea cups and cafe chatter.'

JGL
5つ星のうち5.0 Ambient folk
2011年3月29日に英国でレビュー済み
Amazonで購入
This is one of those albums where the cover picture kind of gives the game away. Redolent of the small fishing villages on the East Neuk of Fife this album represents the sort of music you might hear a couple of guys playing in the corner, playing for themselves as much as anyone else, but knowing that the beauty in the songs has captured everyone's attention. Hopkins' lush electronic ambience and keyboards backs up Kenny "King Creosote" Anderson's crystal clear vocals - his voice has never sounded better by the way. With no more than some gentle strumming and accordian work on top of that, this is a minimalist, almost sombre album that somehow lights up your day as the ethereal beauty shines through. I am given to understand that there are reasons for it being quite a short album (in today's terms at least) but as they say, you should leave them wanting more which is certainly the case here. So hit the "repeat" button and enjoy again
続きを読む
54人のお客様がこれが役に立ったと考えています
違反を報告
レビュー を日本語に翻訳する

Chris G
5つ星のうち5.0 More great work from Kenny Anderson
2011年10月8日に英国でレビュー済み
Amazonで購入
In a year that didn't see the release of a true, all-time classic album in the shape of PJ Harvey's "Let England Shake" this would have been a real contender for album of the year. An unlikely collaboration between electronica composer John Hopkins and Fife's finest; Kenny Anderson, known as King Creosote produces magical, touching and beautiful results that yields more and more of its charms with repeated listening. Lyrically the album explores the lives of fishermen on the unforgiving Fife coast, exploring the relationship between the land and the ocean and the difficulties of a life spent exploiting the sea.

Musically the album achieves a seamless link between Anderson's unashamedly lo fi instrumentation (he is a master accordion player and competent acoustic guitarist) and the atmospheres and soundscapes created by Hopkins. We start with a beautifully realised soundscape combining snippets of conversation with a building electronic atmosphere that segues wonderfully into the gorgeous "John Taylor's Month Away". Put on the headphones and listen to seagulls, waves rolling against a rocky shore all of them taking on musical qualities against Anderson's beautifully recorded strumming.

By some distance the finest quality of this tremendous album however is Anderson's vocal performance. Rarely have I found male vocals as beautiful and affecting as Anderson's and on this album you will find many of his finest recorded moments. On the hearbreakingly lovely "Bats in the Attic" Anderson's vocals set against understated piano chords, some subtle drums and reverb which perfectly holds everything together the vocals soar and intertwine with beautiful harmonies in a way that few could master. An album then of beautiful components, bound together by wonderful songwriting and arrangements that still manages to surpass the sum of its parts. A rare occurrence indeed and one to be treasured. Highly recommended.

Eamonn MacNeill
5つ星のうち5.0 Delicious
2018年3月28日に英国でレビュー済み
Amazonで購入
“Diamond Mine” is a collaboration between Scottish Folk singer/songwriter and Electronica artist John Hopkins.
Nominated for the Mercury Prize album of the year in 2011, it’s inspiration is taken from the East Neuk of Fife, an area in Scotland that looks over the
Firth of Forth, comprising of the fishing villages in that region.
It’s a stunning album blending KC’s intimate acoustic accompanied vocals with JH’s field recordings and delicious ambient electronics.

Mike the Fish
5つ星のうち4.0 A nearly great album
2011年8月20日に英国でレビュー済み
Amazonで購入
I heard a track from this album by chance on late night radio. Checked out the album on a streaming service and ended up buying the vinyl. The album itself sounds to me like a rainy day in a small Scottish village. It's very easy to hear samples of the album - even the whole thing in full - so I'll keep the material review to a minimum. This is mainly a wonderful, short album that runs through as one piece on side 1, but seems to wind down early on side 2 as if ideas ran out/momentum was lost which is a real shame. Side 2 although only holding three tracks plays as two pieces. The second track fades rather than segues and the last track feels like it doesn't quite belong, or doesn't quite fit into the sequence. This is a shame because if the momentum and feel of side 1 could have held up for side 2 this would have been quite some remarkable album, it's still fairly stunning to me, but that's carried largely by side 1.

It sounds very nice with surprisingly deep bass in places. Mine may be a little off centre on side 2. One thing that seems odd is that the record seemed to click a bit more on second play (dust?) and a lot after a clean which could be that I didn't clean properly or that there was some residue in the groove. There may be a brief part here and there that sounds a bit off - cutting or pressing or tracking I don't know, but they are very brief.

Custom labels on the record look nice, and the record is in a poly inner sleeve, which is a nice touch for care as the record is slid in and out of the inner. The is also a lyric sheet included - I've yet to figure out exactly what Your Own Spell is about - feel free to comment and let me know. Sleeve is standard rather than gatefold. A small quibble, but I felt that a gatefold sleeve with part of the lyric inner presented on the inside of the open sleeve would have suited an album of this quality more.

My copy came with a download code for the album too, but the terms and conditions on Domino's site seemed over strict and not particularly well thought through/reasonable.
続きを読む
4人のお客様がこれが役に立ったと考えています
違反を報告
レビュー を日本語に翻訳する

miseryguts
5つ星のうち5.0 Hauntingly beautiful
2012年8月29日に英国でレビュー済み
Amazonで購入
When this album was released I had an impatient listen and dismissed the album on the account of being `boring'. How wrong I was. While we're told never to judge a book by its cover, the plain, rustic-looking album art we're presented with mirrors the album perfectly. It's folk at its best and it's a real gem, hard to find these days.

Diamond Mine is a resting place - an old friend to curl up to when you're feeling low. Its minimalist approach include sounds of the sea and the calming ambience of sweeping electronica (Jon Hopkins' contribution to the album) which make the accordion sounds and sparse guitars all the more enthralling. Kenny Anderson (a.k.a. King Creosote) has the most perfect voice for Diamond Mine - captivating the listener with the strong Scottish accent and delightful vocal ornaments. This 7 track album took King Creosote and Jon Hopkins 7 years to complete, totally unrushed and this really shows. The songs speak for themselves, there's no overcomplication and its a beauty to behold in its entirety. As Jon Hopkins remarked in an interview, Diamond Mine is more of a `complete experience' than a load of hit singles thrown together and it really works. `Bats In The Attic' has to be my favourite, the harmonies send a shiver up my spine and the mysterious female vocals add a new depth to an already outstanding album.
続きを読む
違反を報告
レビュー を日本語に翻訳する
すべてのレビューを参照します
Amazonプライム会員ならお急ぎ便、日時指定便が使い放題
さらに、映画もTV番組も見放題。200万曲が聴き放題 。クラウドに好きなだけ写真も保存可能。
> プライムを無料で試す