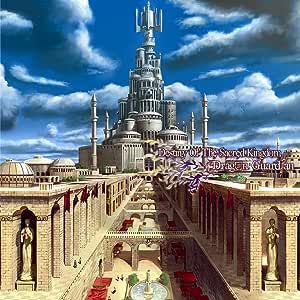 Destiny Of The Sacred Kingdom

Matt Stoessel
5つ星のうち4.0 a spike up in international appeal?
2013年3月13日にアメリカ合衆国でレビュー済み
Amazonで購入
This is my third Dragon Guardian album. My first was 真実の石碑 (SHINJITSU NO SEKIHI) (the band's third), and my second was Dragonvarius (the band's fifth). Destiny of the Sacred Kingdom is the 6th, although it is a re-recording of the band's first album, 聖邪のドラゴン. Rerecording or new recording, this release makes it 3-for-3 of Dragon Guardian albums that don't catch my interest until the end.

Each of these three albums features an intro that does its job, but little more. So I say, "Okay," and get ready for the action to really begin. There are approximately 4-7 songs on each of these 3 albums that all sound almost the same to me. By the album's midpoint, my attention seriously begins to waver. This is arguably my biggest complaint with Dragon Guardian (and many Japanese bands, for that matter) - they simply LIVE in the world of very fast songs and rarely leave the nest. Even Rhapsody, on Power of the Dragonflame, stopped the speed assault of Knightrider of Doom and the title track to present us with the ultra-groovy March of the Swordmaster.

But then we get to a song that suddenly wakes me up from my trance of being stuck in the same song over and over. On Dragonvarius, it's a point about halfway through the 12-minute title track (track 6). On 真実の石碑 (SHINJITSU NO SEKIHI), it's track 9, Dai Ni Ji Majin Seisen. On Destiny of the Sacred Kingdom, it's the title track again (track 8). Oddly, on the first two albums, these songs both have a section that wouldn't be out of place on a Gothenburg melodic death metal album (At the Gates, early The Haunted, Dark Tranquillity, etc.). Destiny of the Sacred Kingdom's title track begins with a furious blastbeat assault accompanied by high-pitched keyboards not unlike what I've been hearing throughout the whole album so far.

What I know from this is the following: Clearly, Dragon Guardian can play songs that are different from the first 4-7 songs on each of these three albums. They just don't choose to do so often, and when they do, we only get a small taste and it's all the way at the end of the album. If Dragon Guardian wants to truly increase their fan base, this is something I think composer Arthur Brave should look into.

The 4 stars is still a solid rating, and there are still a handful of reasons to pick up this album.

1) The lyrics are finally in English, and this is a big "thank-you" to Dragon Guardian, as the band is now much more accessible to an international fan base. Leo Figaro of Eyes of Fenrir (I own his Victorious Holy War album) handles the vocals. (He also sings for MinstrelX, Marchen Station, and the new Dreamstoria - get to know this guy if you're going to get into Japanese power metal.) Fuki of Light Bringer sung on the previous albums. Her voice was very pleasant and it will take me time to get used to hearing Leo singing for Dragon Guardian. Then again, I can understand Leo. Sort of. I still need the lyric booklet.

2) The production/sound quality continues to improve upon its already top-notch found on the previous Dragon Guardian release. Sound quality is a bit of a turn-off to me with some of the earlier 2000's and even 1990's Japanese metal releases. Listen to the first couple of Galneryus albums compared to the last couple and you'll see what I mean. The instruments are much more muddled together in a way that makes it hard to distinguish the instruments from one another, and, in effect, it becomes difficult to tell what you're hearing (like on low-fi black metal releases).

3) Johann Sebastian Bach of Japanese progressive metal band, Thousand Leaves (I've heard some of this stuff; it's mostly instrumental, but addicting and worth a listen), does lead guitar in 6 of the songs. Track 3, Mountain of Sword, opens with one of many great solos on the album (not found on my other two Dragon Guardian albums) which I assume is Johann's work.

4) My copy (purchased right here on amazon.com - yes, the standard/American one) comes with a bonus track, Doll. This song is also different from the early bulk of the album and will make me keep coming back (providing I don't simply put this song and the title track on my iTunes and then let the CD collect dust somewhere).

Dragon Guardian signed with German record label, IceWarrior Records, for this release. The band must have planned for a much more realistic international distribution (and fan base, I'd imagine) with this move. (For my first two Dragon Guardian CDs, I had to order through the Japanese amazon, which sure is a hassle for an American, non-Japanese-speaking customer.) From 2007-2012, the band released 11 full-length albums and three EPs. From what I gather, this is the only one entirely (or even partly) sung in English.

Arthur has put out five albums +after+ this one. Your guess as to what direction Arthur goes in next is as good as mine. When all of the information I can find on these bands is in Japanese and the terms are "arranger," "tohou," and "circle," I quickly become completely lost. I just listen to the music. In the meantime, this release is one blip on the English-singing radar, so I'll likely have to be content listening to Energy Strike, Balflare, Knights of Round, Eyes of Fenrir, Area 51, Azrael, and a few others until I can make more sense out of bands like Dragon Guardian, Unlucky Morpheus, Iron Attack, and Kissing the Mirror.

For those of you new to Dragon Guardian and/or Japanese metal, the overall style magnifies the cheesiness/floweryness of even the happiest of European metal bands and multiplies it by about 10. Even Helloween's "I Want Out," Hammerfall's "Hearts on Fire," and "Eagleheart" by Stratovarius don't have this a strong dosage of happiness. Surely though, if bands like these and Rhapsody, Sonata Arctica, Angra, Aquaria, Labyrinth, and perhaps Dragonforce tickle your fancy, then you'll probably get something out of Dragon Guardian. Many of these Japanese albums have album medleys available for download from the band's website. Destiny of the Sacred Kingdom is no exception. Give it a try!
続きを読む
役に立った
フィードバックを送信中...
フィードバックをお寄せいただきありがとうございます。
申し訳ありませんが、お客様の投票の記録に失敗しました。もう一度試してください。
違反を報告
レビュー を日本語に翻訳する