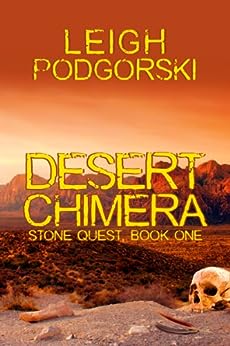 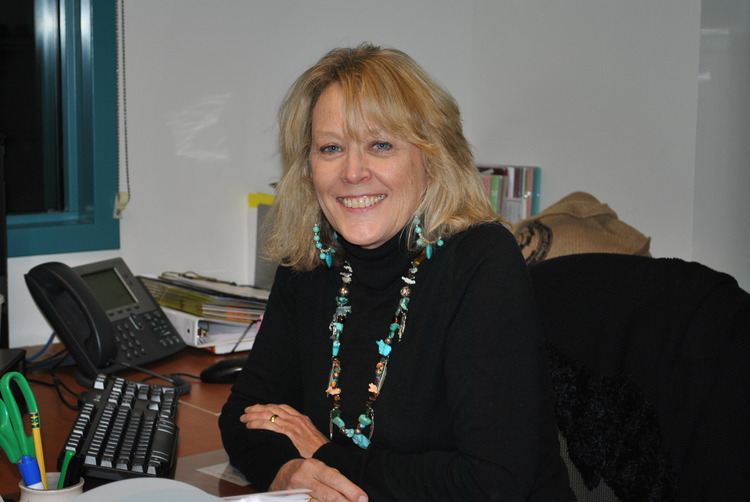 英語版 Leigh Podgorski (著) 形式: Kindle版
1 巻 (全 3 冊): Stone Quest
すべての形式と版を表示
Sorry, there was a problem loading this page. Try again.
Desert Chimera, the first book in the Stone Quest Series, introduces the reader to recluse, tracker, and reluctant twenty-eight year old psychic visionary Luke Stone and to his paranormal universe. Luke has been sequestered in the serene woods of Northern Michigan under the tutelage of Cherokee guide Shadow Wolf. When the shaman suddenly dies, Luke flees on a desperate cross-country quest that takes him to the heart of Death Valley.There, Luke is assaulted by terrifying visions of the apocalypse. While praying in agony for release, a shimmering specter arises from the sands to stand beside him. But this is not the one Luke has sought. Instead, this is the One from whom Luke had escaped seven long years ago, the black magician and his arch nemesis Armand Jacobi.

Torrential rains flood; rivers of mud flow. Luke is forsaken. But deep within the cacophony of the storm, Luke hears a voice calling. Following the call, Luke stumbles out of the wilderness and into Eppie Falco’s Desert Inn and Café.

Gathered here also seeking shelter from the storm are an array of fellow travelers. However, upon a clap of thunder and a burst of lightning, the café door swings open and Armand Jacobi, the charismatic black magician Luke had seen as the vision in the desert in the desert and the man from whom he had run now stands before him in the flesh.

Among the travelers whom Armand eventually takes hostage in his struggle with Luke is Consuelo Arroyo, a woman whose life Armand threatens, a woman with whom Luke is falling in love, something he'd never thought would be possible for him.

As Luke’s battle with Armand heightens, Luke is confronted with the full horrors of his past. The battle that rages will culminate in either Luke’s final destruction or his ultimate redemption.
続きを読む
Previous page
Next page
販売： Amazon Services International, Inc.
【買取サービス】 Amazonアカウントを使用して簡単お申し込み。売りたいと思った時に、宅配買取もしくは出張買取を選択してご利用いただけます。 今すぐチェック。
このシリーズの次の3巻 シリーズの詳細を見る
小計: ￥ 851
獲得ポイント: 9 pt (1%)
シリーズをまとめ買い (3巻) シリーズの詳細を見る 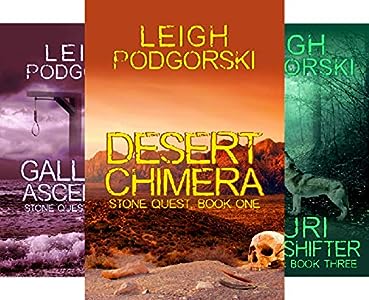 A.H. Richards
5つ星のうち3.0 A book with potential
2014年12月14日にカナダでレビュー済み
Amazonで購入
Leigh Podgorski’s Desert Chimera starts off dramatically, with a storm, and a boat struggling through, in danger of sinking. There is a young man in the boat, and a mysterious old man, and despite the raging storm, they make it to shore, where the young man, Luke, prepares to unburden himself of “the burden that had bound him body and soul for fourteen tormented years.” This first chapter is powerfully written, and I expected more of the same.
The novel unfolds, however, like a stage play – which is perhaps not surprising, given that Podgorski is an award-winning playwright – with all of the action taking place in one space, except during flashbacks. This gives a kind of claustrophobic restriction to the drama, which left me constantly wanting more development, somewhere away from the desert café where everything occurs.
Podgorski flirts with such development – adding layers of significance to the café scenario and the interaction of the two major characters, Luke and Armand, through Luke’s flashbacks. Yet, for me, as page after page unfolded, real, dimensional drama did not cohere. Somehow, the narrative remained distanced, abstracted throughout. Perhaps this was purposeful, in order to create a chimerical tale fitting to the novella’s title. I found that it was a case of vocabulary creating distance, rather than closeness, of clouding relationships between characters rather than giving them substance. Certainly, someone is killed (I think) in the story, which should be significant. And there are ghosts in one series of flashbacks about raising dead spirits, which did actually engage me with imagery that truly struck the mind. Ultimately, however, I felt as though Podgorski was seeing this narrative through the eyes of a playwright, expecting actors to realize everything more fully on stage.
Podgorski brings potentially powerful elements together in this story: paranormal events, a nefarious Fagin-like character in Armand, a native medicine-man/teacher, the protagonist Luke, gifted with powers to heal and to harm. And yet, she seems to skate over the top of all these things, as though they are seen through ice, acted out beyond our reach. As a result, to the last line, the novel was a chimera to me. True to its title, perhaps, but too ephemeral and abstracted for me as a reader. I gave it three stars, nevertheless, because I can see the care that Podgorski put into the writing.
続きを読む
違反を報告する
レビュー を日本語に翻訳する

Spells. Characters that will intrigue you, modern day mages Luke and Eppie, and a character that you will love to hate, the indescribably creepy Armand, populate this disturbing read which shimmers. This story is like its primarily desert setting, wild, primitive, magical and full of mystery and danger. The imagery makes for powerful visuals and the prose is quite cinematic--it it easy to envision this work as a feature film or the first part of a made-for-TV mini-series. This story is likely to stimulate your own dreams, visions and awareness of the magical and mystical that often coincide with the more mundane elements of life. If you love spiritual adventures where dark forces battle light, stories in primitive wild settings where the landscapes are effectually their own character, and the scent of "cherry wood and sage oil with the essence of pine" ('Desert Chimera,' Chapter 3), then you will love this book. Yes, the prose doesn't flow like water, but rather, like the wilderness, is a wild and natural craggy piece of writing meant to be and effectively a journey and experience. Think #Deepdesires #Rapture #Visions Happy reading~*
続きを読む
違反を報告する
レビュー を日本語に翻訳する

steve hobbs
5つ星のうち4.0 So Much Depth in this Story
2017年5月26日にアメリカ合衆国でレビュー済み
Amazonで購入
Set in a desolate desert cafe during a pounding storm, Desert Chimera tells the story of Luke Stone, a young man finally facing his demons. The main demon has followed him to this remote location and evil intentions. The main story reads like it was meant for the stage (Podgorski is a playwright) and covers their reunion. The back story is tragic and mainly explains the magical elements of the tale. The pace never lets up and the writing is tight and crisp. I highly recommend this book, which is the first in a series. Great job.
続きを読む
違反を報告する
レビュー を日本語に翻訳する

Heidi White
5つ星のうち4.0 exciting read
2013年3月13日にアメリカ合衆国でレビュー済み
Amazonで購入
Leigh Podgorski's DESERT CHIMERA is an exciting read. Many places in the book were at such a tempo I couldn't put it down or turn the pages fast enough. A wonderfully constructed mix of mystery, intrigue, and action, spiced with just the right touch of the supernatural. You never know what will happen next. Have fun! Read the book.
続きを読む
1人のお客様がこれが役に立ったと考えています
違反を報告する
レビュー を日本語に翻訳する