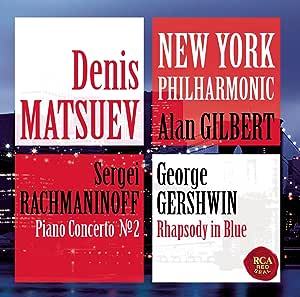 Malcolm U
5つ星のうち5.0 A Glorious Performance.
2014年10月14日に英国でレビュー済み
Amazonで購入
Denis Matsuev's interpretation of the Rachmaninov No 2 is inspirational. This is now my favourite. I have several recordings of this concerto. I first heard Denis Matsuev playing the work at a BBC promenade concert a few weeks ago and was deeply moved by his energy, enthusiasm and technique. The New York Philharmonic under its conductor Alan Gilbert is equally superb. Both soloist and orchestra are well matched and the overwhelming effect is very pleasing. George Gershwin's Rhapsody in Blue is different from the usual manner in which it is played, but hearing Matsuev's performance gives the popular music a uniquely personal interpretation. All round this is a great record and I highly recommend it.
続きを読む
4人のお客様がこれが役に立ったと考えています
役に立った
フィードバックを送信中...
フィードバックをお寄せいただきありがとうございます。
申し訳ありませんが、お客様の投票の記録に失敗しました。もう一度試してください。
違反を報告
レビュー を日本語に翻訳する

Hannibal
5つ星のうち5.0 Terrific Rachmaninov - colorful but weird Gershwin
2013年10月8日にアメリカ合衆国でレビュー済み
Amazonで購入
As an unrepentant audiophile when it comes to great sound, I must start off by telling you I'm truly sad that Channel Classics or Bis was not in charge of this recording since the Sony team used here for Matsuev eschewed DSD mastering, SACD, and meeting the best modern standards achievable, and which apparently only a few others (eg. Volodos, Sudbin, etc.) insist on and get. Here it seems the producer and Matsuev must have assumed these pieces to be merely hackneyed warhorses, and accordingly used an old MGM musical for their inspiration. A real pity, as these performances deserved the best!

And it is particularly tragic because Matsuev provides a masterful example of almost unbelievable virtuosity in the Rachmaninov, and he is supported marvelously by the New York Philharmonic under Alan Gilbert, with no sense of routine accompaniment. They really dig in and play their hearts out.

Even in the Gershwin, Matsuev shows us a different way, still delightful, but somewhat straight-laced in style, leaving Earl Wild to remain the exemplar of the ur-text tradition and still holder of the crown. However I think one must also say that Matsuev isn't helped very much by Alan Gilbert and the NYPO who are strangely awkward and seem ironically inhibited by the American style, as if they are just going through the motions, and they don't "feel" at ease with the music like Arthur Fiedler and the BSO do for Earl Wild.

Never-the-less, for the ultimate in virtuosity and Russian fire, despite the over-engineered, mushy sound, hear Matsuev play the Rachmaninov Second Piano Concerto. You won't regret it! - It's an unforgettable experience! - BUY IT!

P. Adrian
5つ星のうち5.0 Matsuev shines again
2013年7月28日にアメリカ合衆国でレビュー済み
Amazonで購入
Denis Matsuev is definitely in love with Rachmaninov music. He committed to disc lots of marvellous interpretations of latter's work including concertos and solo pieces. This time, the (still young) Russian virtuoso decided to re-record the celebrated "No. 2" accompanied by the New York Philharmonic under the baton of its music director Alan Gilbert. Even if there could appear some grumpy people to nag this version, I must confess I find it simply marvellous on the part of the soloist and very good on the orchestra's part. I admit that maybe the recorded orchestral sound could have been improved or a bit more balanced, if not even enhanced, but this detail doesn't alter the overall impression. Matsuev dominates the proceedings with such a compelling force and sensitivity that the music seems to simply happen on the spot. The pianist's musical inspiration, though minutely weighed, exhibits an improvisational freshness and a deeply felt empathy with composer's intentions. The same infallible skills are employed in performing Gershwin's Rhapsody in Blue, where a kind of welcome lightness surfaces the jazzy fluid and catches that proper charming swing and improvisatory aroma. Alan Gilbert smartly conducts his orchestra giving a supporting accompaniment in both pieces, but knowing that they are no more than suitable vehicles for the soloist to shine and prove his gifts. It is what Denis Matsuev does copiously on this recording.
続きを読む
8人のお客様がこれが役に立ったと考えています
役に立った
フィードバックを送信中...
フィードバックをお寄せいただきありがとうございます。
申し訳ありませんが、お客様の投票の記録に失敗しました。もう一度試してください。
違反を報告
レビュー を日本語に翻訳する

Hippo
5つ星のうち2.0 Huge Disappointment
2013年6月19日にアメリカ合衆国でレビュー済み
Amazonで購入
I am a big fan of Denis Matsuev and his Rachmaninoff #2 with Budapest Philharmonic may be the best version of the piece. But this version with New York Philharmonic is a disappointment. Matsuev plays well but not as well as the Budapest recording. First of all, the piano tone is way too bright. That sound may be OK for Gershwin but certainly not for Rachmaninoff. The orchestral sound is heavily processed and doesn't sound natural at all. New York Philharmonic played with not much passion.
続きを読む
4人のお客様がこれが役に立ったと考えています
役に立った
フィードバックを送信中...
フィードバックをお寄せいただきありがとうございます。
申し訳ありませんが、お客様の投票の記録に失敗しました。もう一度試してください。
違反を報告
レビュー を日本語に翻訳する