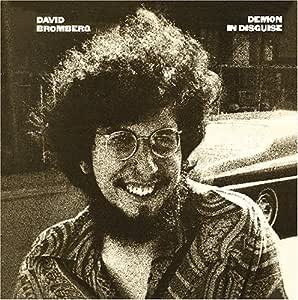 Al Snyder
5つ星のうち5.0 Buy this David Bromberg disc - this is the one!
2006年2月23日にアメリカ合衆国でレビュー済み
Amazonで購入
I went out on a big cyber Easter egg hunt for a song that I remembered of David's songbook that contained this haunting line: "A man should never gamble...more than he can stand to lose." This sung in a voice that knows the true meaning of the price that's paid for such a foolish risk. That song, is 'Diamond Lil', just in case anyone else is trying to put 2 and 2 together, and it's the fourth cut on this disc. I was right it's still haunting and honest, and gorgeous.

This album is from the tail end of an era when there were so many albums that were just plain good from beginning to end and this is no exception. Some might see the song listed here: "Mr. Bojangles" and think of the Hollywood schmaltz and crassness that Sammy Davis Jr. turned it into. Not so. David gives praise to it's creator Jerry Jeff Walker, along with a funny story about it's true origins, and then proceeds to rip your heart out with his beautiful rendition of it. I have Jerry Jeff's version and David's....I prefer this one.

His songwriting and musicianship were at its peak, his band of amigos were all stellar musicians from other bands, they cover Irish fiddle tunes and reels, folk, bluegrass, rock/carney/main street moan fusion (inside joke - you'll get it when you buy the disc) and even a waltz from Tennessee. So there's literally something for everyone. Sorry, this was pre-RAP.

I had the great fortune of seeing Mr. Bromberg around the time this album was made, and as far being an accessible, down to earth, friendly, just plain nice guy on stage, as well as a consummate musician at such an early age, I don't think I saw anyone else that could have topped him (in all those areas) at that moment in time. I think that 6 of the 9 tracks on Demon in Disguise are live and they sound just like studio recordings except that all of a sudden you hear people applauding at the end! Except for the obviously live songs (Bojangles), that kind of spooked me a bit! I guess we have Wounded Bird Records to thank for the great mastering job.

Anyway, you'll be doing your ears and musical soul a great kindness to partake in this bit of musical history. It's more than great, if you let it wash over you it's magic!

Oh, and don't let the glasses fool ya.

D. Jester
5つ星のうち5.0 Classic Bromberg. Perhaps his best
2011年2月2日にアメリカ合衆国でレビュー済み
Amazonで購入
David is up to quite a number of albums now, but this one remains at or near the top. But, if you have never heard him, look some samples up online before purchasing, his style isn't for everyone. He used to tour with Arlo Guthrie, and generally those who liked Guthrie, liked Bromberg. Some of his work leans toward the humourous. He is a great guitarists, and tends to employ great backup musicians, as well. One thing about David is that he tends to age well with you. If you like him a little at first, you will most likely enjoy him more, later.
続きを読む
1人のお客様がこれが役に立ったと考えています
役に立った
フィードバックを送信中...
フィードバックをお寄せいただきありがとうございます。
申し訳ありませんが、お客様の投票の記録に失敗しました。もう一度試してください。
違反を報告
レビュー を日本語に翻訳する