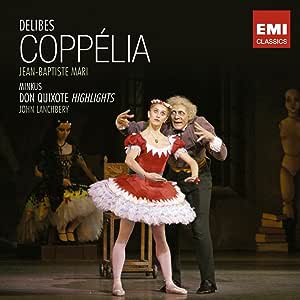 Nigel
5つ星のうち5.0 The most delightful ballet music - beautiful tuneful recording
2020年10月15日に英国でレビュー済み
Amazonで購入
A recent convert to Delibes music this is now one of my favourite classical music C.D.'s. For ballet music Tchaikovsky was always the supreme composer to me and could always understand why his was so popular. I never thought any other composer could compete. I was wrong. This is a very popular ballet and the supporting music is absolubtly fabulous. Its not left my CD player since it came through the post. This recording was made in 1977 by the Paris national opera orchestra conducted by Jean-Baptiste Mari. Its a good clear recording but the sound quality may be better with a more recent version of the recording. The recording includes Don Quixote by Ludwig Minkus on the second CD of the set by the Elizabethan Trust Melbourne orchestra and was recorded in 1972. An excellent value set that I can recommend notwithstanding the 1970's recordings. Guaranteed enjoyment.
続きを読む
違反を報告
レビュー を日本語に翻訳する

Dr. Paul R. Terry
5つ星のうち5.0 Excellent Delibes
2010年12月20日に英国でレビュー済み
Amazonで購入
I bought this recording on LP when it first appeared around 1977 or 78. The CD transfer is wonderful, with first-rate clarity, despite the big acoustic of the Salle Wagram. Mari was the Opera Orchestra's tuba player for 25 years, retiring around the time this recording was made. He must have played this work many times, and he has an instinctive feel for the right tempi. The unique sound of French orchestras has largely disappeared in the intervening 30 years, so this represents a lost tradition, happily preserved on this fantastic set.

The fill-up of excerpts from Minkus' "Don Quixote" suffers from an overly-reverberant acoustic, although the Melbourne orchestra plays well. Lanchberry's tinkerings with the score work better in the theatre, as I can attest, having seen this version in London with Nureyev as Basilio, in the mid-70s (there's also a film with Nureyev joined by Helpmann as Quixote). The thumps & crashes in the percussion underline comic business on stage but just seem odd taken out of context.

This is certainly worth buying for the Delibes alone, and I recommend it very highly.

Bill Glen
5つ星のうち5.0 One of the most vivid ballet recordings ever made
2014年2月28日に英国でレビュー済み
Amazonで購入
Like the previous reviewer, I treasured the original LPs, and the transfers to CDs have enriched the sound so the details project with more clarity and richness. The pacing and sound of this highly characterised beautiful performance puts it at the head of the list in my view and led me to buy the companion issue of Sylvia.

The Lanchberry Don Quixote highlights bonus is enjoyable, but it is Jean-Baptiste Mairi and his excellent orchestra that one remembers long after listening. Ballet music recordings don't come much better than this! An absolute delight!

ab
5つ星のうち5.0 Such positive music!
2016年12月25日に英国でレビュー済み
Amazonで購入
Fantastic positive music. I bought it to set the scene for a hundred or so people coming into a hall for a meeting. Perfect!
続きを読む
2人のお客様がこれが役に立ったと考えています
違反を報告
レビュー を日本語に翻訳する