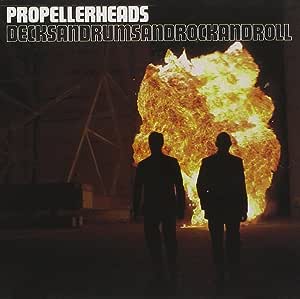 8. A Number Of Microphones

9. On Her Majesty's Secret Service

E. A. Solinas
5つ星のうち5.0 And they played records
2005年5月2日 - (Amazon.com)
形式: CDAmazonで購入
Big beats. Hip-hop. James Bond. That's the description of the Propellerheads' "Decksanddrumsandrockandroll," a wildly enticing album that mixes dance music with a James Bondian atmosphere. Its crossover appeal and originality are very good, but the raw energy is the icing on the cake.

A cheerful, sputtering radio sample opens the album, before leading into a gritty maze of electrobeats and percussion, interspersed with samples. It's heavy stuff, but still fun. Things reach their heaviest point near the end when jazz rhythms are mingled with deep vocal samples and some blisteringly raw electronic buzzes.

It gets more fun in the second song, "Velvet Pants," a vaguely jazzy song with the constant repetition, "He's got a nice body, he's wearing velvet pants... Send the first kid down, send the first kid down, and they played records."A more openly hip-hoppy sound enters with the pleasantly slackerish "360° (Oh Yeah?)", while "Winning Style" has a glitzier, faster tone.

The best songs of all are the ones with a distinctly James Bondian flair: "History Repeating" is a wonderfully overwrought lounge-dance song, with Shirley Bassey roaring that, "And I've seen it before/and I'll see it again/just little bits of history repeating!" Same with spy dance-track "Spybreak." But things reach their peak with "In Her Majesty's Secret Service," a ten minute opus that mingles majestic retro with big beat fun, complete with an orchestral brass climax.

If it sounds fun, that's because it is.

Kitschy electronica is one of the easiest kinds of music to mess up, especially if there's sampling going on. Give it a theme, and it's even harder. But the Propellerheads pull this incredibly engaging album with rare style and skill, pulling together spy flair with disparate musical styles -- who would pair funky dance beats with an epic brass section? Apparently they would -- and it works.

The Propellerheads veer wildly from one style to another, sometimes mingling styles. Rather than sounding messy and fragmented, they create densely-constructed, dancey songs. And they know just how often to repeat a sample, and where to place it, just to keep the beats and rhythms from seeming repetitive.

The Propellerheads have yet to create a follow-up to "Decksanddrumsandrockandroll" but this one is enough to keep fans raving. Wildly original, full of raw energy and lots of fun.

Jen Schoonover
5つ星のうち5.0 Music to torture by
2017年9月20日 - (Amazon.com)
形式: CDAmazonで購入
My husband is one of those guys who will put a CD in his car and let it play until we all want to kill him. Hence why I know EVERY song on the Mortal Combat 2 soundtrack, Repo Man Soundtrack, and Matrix soundtrack. Over and over. So I got him the Propellerheads CD, because Spybreak was his favorite song from the Matrix. Now he plays this one non-stop. But at least it's still somewhat new, and I really enjoy several of the songs.
続きを読む
2人のお客様がこれが役に立ったと考えています
レビュー を日本語に翻訳する

Gary Peterson
5つ星のうち5.0 Outstanding CD.
2004年1月3日 - (Amazon.com)
形式: CDAmazonで購入
After seeing Propellerheads on my recommended list several times, I finally gave in and bought the Decksandrumsandrockandroll CD. Terrific choice! I loved the album from the opening song. Propellerheads are amazingly versatile and the range of styles and moods exhibited on this disc are astounding. The covers "History Repeating" (Featuring Shirley Bassey) and "On Her Magesty's Secret Service" are absolutely first rate. Other wonderful tracks include "Take California," "Velvet Pants," "Bigger ?," "Cominagetcha" and "You Want It Back" (Featuring Jungle Brothers). Lesser tracks, but still quite good, include "360 / Oh Yeah" (Featuring De La Soul), "Winning Style," "Bang On!," "Better ?" and "Spy Break." I find no merit in "A Number of Microphones" and I wish I could get it off the CD.

I've now listened to this CD about 20 times and I thoroughly enjoy it. Some of the songs provide excellent dance music. However, the humorous banter and the aforementioned "Microphones" track don't stand up to repeated listenings and I'm left with the urge to edit the disc. Alas, this is a minor complaint and some listeners may actually enjoy this stuff. All in all, this is an outstanding disc and I'll be looking forward to their next offering.

Darryl K. Clark
5つ星のうち4.0 a pleasant surprise
2007年5月12日 - (Amazon.com)
形式: CDAmazonで購入
the propellerheads are a pleasant surprise on the lounge music scene. the beats they whip up into their tunes are faster than usual, peppy and zingy. they are a perfect accompaniment for retail environments and luxury car advertisments.