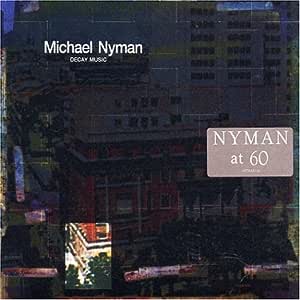 Fratzel
5つ星のうち3.0 the CD giveth, and the CD taketh away
2004年10月5日にアメリカ合衆国でレビュー済み
Amazonで購入
This has always been my favorite Nyman recording. I never much cared for his "baroque/minimalist band" stuff, and he only got more mainstream from there. Fair enough, but I've always wanted to hear more of his experimental period, before he became Britain's answer to Philip Glass. As far as I know, this is the only work of his from that era (1970s) to ever be released. (check out Nyman's useful book, "Experimental Music: Cage & Beyond")

This is a perfect candidate for CD reissue, and I've been waiting for it for years. As noted elsewhere, "1-100" is a quiet, sparse piece for multitracked piano chords, gradually working from the high end of the keyboard to the low, with plenty of empty space along the way (he waited until each chord died away completely before playing the next one in the progression). This is a minimalism not of endlessly repeating 16th note arpeggios or drones, but of spare means and silence - a work easily ruined by the slightest bit of LP surface noise. So the CD should be cause for rejoicing for anyone who loves this long out of print recording. Well, sort of...

While the CD takes care of the surface noise issue, it also reveals some problems with the original recording. The opening of "1-100" has some badly distorted reverb on one of the piano tracks. At first I thought the CD itself was defective, but the second track sounds fine. Then I thought perhaps the track was remastered badly, but it improves over time. There is a third track, not included on the original LP, which is the same recording as the first track but heard at its proper speed (the original LP version was intentionally played back at half the recorded speed to make it more languorous). If you compare these two versions, you hear the same harsh distortions in exactly the same places, meaning they are on the original master recording. And thanks to the clarity of digital technology, the tape hiss on the first track, once masked by LP noise, is now plainly audible and somewhat distracting.

On the upside, the percussion piece "Bell Set No. 1" sounds much more crisp and clear than I remember it on the LP, so if you are a fan of that one you're in luck. And it's interesting to hear "1-100" the way it was originally played, though I still prefer the half speed version - it's more spacious and dreamy.

All in all, a mixed blessing, but ultimately worth it to once again have this classic of the gentle side of the British avant garde back in print. It was originally released on Brian Eno's Obscure label, a seminal series of 10 LPs that turned a lot of folks on to important British avant composers of the post-Cage era: Gavin Bryars, John White, Christopher Hobbs, David Toop, Penguin Cafe Orchestra, and Americans John Cage, John Adams, and Harold Budd. A few of them have also made it to CD, but someone really needs to reissue the whole set.