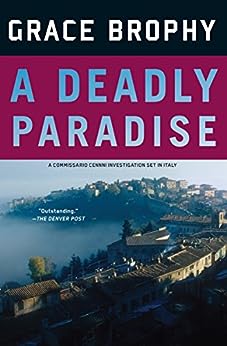 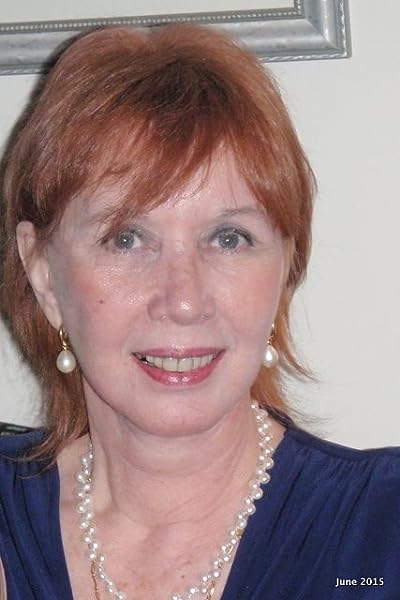 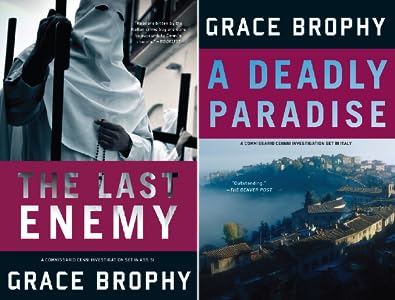 In Brophy's appealing if low-key second mystery to feature Insp. Alessandro Cenni (after 2007's The Last Enemy), the murder of Jarvinia Baudler in the Italian village of Paradiso creates a headache for German diplomat Dieter Reimann, who had been having an affair with the woman. Reimann's need to recover important papers muddies the waters for the inspector, who discovers that the victim was a bisexual drunk who used Reimann to falsify passports, lived beyond her means and was the recipient of threatening letters. As Cenni sifts through all this intriguing information about the deceased, he comes across a link to unsolved murders from 1978 and possible blackmail involving Reimann's wife. A brief shift of scene to Venice to investigate leads from Baudler's youth doesn't add much to the plot, which unfortunately builds to a resolution that will strike many readers as a letdown after the elaborate setup. (May)
Copyright © Reed Business Information, a division of Reed Elsevier Inc. All rights reserved. --このテキストは、kindle_edition版に関連付けられています。

Grace Brophy grew up in New Jersey and now divides her time between New York, Maine, and a village in Umbria. She is the author of The Last Enemy, the first novel in the Inspector Cenni series.
--このテキストは、kindle_edition版に関連付けられています。

Winner of the BookPage "Tip of the Icepick" Award

“The likes of Donna Leon, Magdalen Nabb and David Hewson are joined by Grace Brophy, author of an outstanding new series featuring handsome Commissario Alessandro Cenni of the state police.”
—The Denver Post

“Brophy not only has found in Umbria a fresh setting for Italian crime fiction, but she has also created a character in Cenni, who combines the beguiling personal flaws, slumbering sex appeal, and mysterious detachment of David Hewson’s Leo Falcone and Nic Costa.”
—Booklist

“Brophy has a fine budding series here, with winning characters and settings that include Venice and Murano as well as Umbria, and the ongoing Chiara subplot will have readers anticipating the next installment.”
—Library Journal

“It’s not often that an author’s first book wins the coveted Tip of the Ice Pick Award.”
—BookPage

Noonski
5つ星のうち4.0 Worth a Read
2014年6月8日にアメリカ合衆国でレビュー済み
Amazonで購入
Grace Brophy's second Commissario Alessandro Cenni novel is and isn't as good as the first. I gave her first book 4-stars (I save the 5-stars for the exceptionally good books). If I could, I'd give this one 3.5 stars, even 3.75 stars, because it isn't as neat and tidy as the first book of the series.

How it is as good:

The characters of this book, like the ones in the first book are all very-well brought to life. They're complex, multi-dementional people (even the not-so-nice characters). In short, they're interesting people that are enjoyable to learn about. The writing is as good as the first, and the sly humor is still there.

How it isn't as good:

The pacing in this book is not as tightly paced as her first novel. There's a bit more time spent with some of the characters (which is good), but throws the pacing of the book off just a bit. There are a few moments that seem to drag, and the final wrap up of the mystery seems to miss the mark slightly.

There's a subplot that arises in the latter part of the book, which, I think, would carry over into the next book (if it is ever published -- the author's website states a 3rd book was going to be printed in 2012, but, as far as I can tell, it was never published.)

I always feel that part of the sign of a good book is that it makes you want to read another of the author's books. Even though this book wasn't quite as good as the first, it was far from being disappointing, and I'd certainly read the third book, if it is ever published.

Blue in Washington (Barry Ballow)
5つ星のうち4.0 A welcome addition to the Italian detective fraternity
2008年7月11日にアメリカ合衆国でレビュー済み
Amazonで購入
Grace Brophy's "A Deadly Paradise" is an intricate and exceptionally well spun crime yarn set in Umbria and Venice with a side trip to Urbino. The locations are important to the story as the author wisely weaves in local color to punch up the plot and clarify the character sketches.

Brophy's police comissario protagonist, Alessandro Cenni, is an interesting personality, very much in keeping with the cynical but idealistic cops that star in Donna Leon, Michael Dibdin and Andrea Camillieri's Italian crime novels. Cenni has an alter ego--a twin brother, who is a Catholic Bishop seemingly destined for big things in the Vatican.

But what is most creative about "A Deadly Paradise" is the unfolding story of the principal murder victim of the piece, Jarvinia Baudler, a German woman with such a bizarre history of evil doing that the wonder is that she lived to the age of 77 before she was beaten to death by someone who had finally had enough.

A rich cast of other offbeat characters--a dotty and nasty Venetian Contessa, a larger than life village gossip, a cat-loving diehard Italian Communist, to name but a few--also populate this story to its benefit. Author Brophy attempts to dazzle the reader with this array of wild players and uncountable numbers of red herrings as well to hold our interest with an unusually credible plot. She succeeds across the board, in my opinion.

My only qualm with this well-done book is the slightly irrelevant and therefore less credible pursuit of a lost love by protagonist Cenni. It all may well be explained in the next book in the series, but in "A Deadly Paradise," it seemed a bit tacked on, without a purpose to the book's main story line.

Kindle Customer
5つ星のうち5.0 A Delightful Surprise
2019年6月17日にアメリカ合衆国でレビュー済み
Amazonで購入
I expected this to be just another copy of Donna Leon's Venice mysteries, but it turned out to be a pleasure all its own. The story was interesting and involved, the detective charming and the writing tight and often hilarious. I will be looking for more of Grace Brophy's Cenni stories.
続きを読む
違反を報告
レビュー を日本語に翻訳する
すべてのレビューを参照します
トップへ戻る
Amazonについて
Amazonでビジネス
Amazonでのお支払い
ヘルプ＆ガイド
日本語ショッピングのための言語を選択します。 日本ショッピングのための国/地域を選択します。
© 1996-2020, Amazon.com, Inc. or its affiliates