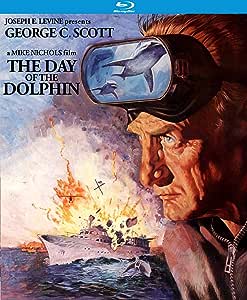 The Day of the Dolphin [Blu-ray]

Wikileaker
5つ星のうち4.0 Proof that a different kind of story can be good and done well. Why don't they make movies like this anymore?
2017年5月17日 - (Amazon.com)
Amazonで購入
Simple but engaging story well presented. A dolphin scientist's research is subverted to an evil end by powerful men in the government and military/intelligence service. George Scott took the role seriously and it shows in his stage presence. DVD transfer, cinematography, and production design all superilor. An entertaining hour-and-a-half, and a must-see for dolphin lovers.
続きを読む
8人のお客様がこれが役に立ったと考えています
レビュー を日本語に翻訳する

Mike Nichols’ neat science-fiction drama The Day of the Dolphin (1973) is fun for anyone that wants to see George C. Scott speak to dolphins that can talk. It’s no more ridiculous a concept than seeing E.T. speak English. I think this movie has been unfairly panned. Nicols directs dolphins! The dolphins are so well trained that they perform every trick in the book for real. Obviously, the voices for the dolphins are dubbed over, but their swimming feats are still impressive.

Nichols directs Buck Henry’s ambitious and fascinating script about the arrogance of man in perverting nature for their own misdeeds. You see a passionate scientist go too far in testing dolphins’ vocal capabilities for his own research interests. The millionaires likewise use the dolphins for their own nefarious plot. It’s a vicious cycle of not comprehending nature. Henry’s dialogue is full of scientific information, research, and imagination. He clevely crafts a story believable out of the extraordinary. William A. Fraker’s cinematography captures the majesty of dolphins swimming complex maneuvers and natural sunlit island vistas alike with a neat visual style.

Sam O’Steen’s editing is very laid back allowing dolphin sequences to play out and characters to naturally react to events. Unfortunately, as nice it is to let scenes play out, he could have cut a little more to up the pace. The Day of the Dolphin’s story could have been told in 90 minutes instead of 104. Georges Delerue’s score is enthralling, romantic, exciting, scary, and beautiful all at once.

I love George C. Scott, especially since he takes his love for his dolphin Alpha so seriously, that he makes The Day of the Dolphin a serious film. Whether Scott is screaming commands to his research team or pleading with his dolphins to speak, you are always entertained by Scott. Trish Van Devere is empathetic and thoughtful to her approach as a wife to Scott and caretaker to the dolphins Alpha and Beta. Her chemistry with her real life husband George C. Scott is believable and endearing.

Paul Sorvino has a neat supporting role as someone you do not expect who he really is at all.

In all, The Day of the Dolphin is fun for watching George C. Scott communicate with dolphins, but also holds a heartfelt sentiment towards the sea creatures. All the real footage of trained dolphins swimming aquatic tricks cannot ever be beat by CGI dolphins.

Andrew
5つ星のうち4.0 Underrated Spy Thriller
2017年7月6日 - (Amazon.com)
Amazonで購入
Dark and underrated spy thriller about rival factions of the intelligence world infiltrating the world of scientific research for their own (sometimes nefarious) ends. Doesn't go as far as the novel in satirizing the cold war and lacks a lot of the humor from the novel as well, however it's still much better than you'd expect a movie about talking dolphin assassins to be. Nice Georges Delerue soundtrack and some unforgettable dialogue by Paul Sorvino as Curtis Mahoney.
続きを読む
3人のお客様がこれが役に立ったと考えています
レビュー を日本語に翻訳する

MommyWoman
5つ星のうち5.0 Love for Dolphins
2011年9月17日 - (Amazon.com)
Amazonで購入
I first saw this film when I was about ten or so (I'm 47, so quit trying to figure that out) and fell in love with the thing. I also fell in love with George C. Scott and dolphins, never forgetting how much I cried at the end. This movie stuck with me all my life so much so that I worked hard enough to garner two one-month opportunities to actually work with dolphins at a local aquarium. During the second time, I was given the task of trying to rehab/save the life of a Commerson's dolphin (their coloring is just like Orca whales!) that had been intercepted during an illegal flight to Japan. There had been two of them, but the male died almost immediately due to the horrid conditions they were enduring during the shipping. The female survived for a while and routinely ate what I fed her; I think she felt unthreatened by me because I was about her size (I was 14 at the time) and didn't try too hard to get in her face. She eventually allowed me to touch her, rub her belly and stroke her poor, horribly bent tail (caused by her being packed into a wooden crate too small for her). When my time was up, I had to leave and she died not long after. I often wonder if I had been permitted to stay on if she would have survived.
Nevertheless, the only reason I fought for and won the opportunity at all was because of the passion for cetaceans that this movie ignited in me at the age of ten. This amazing movies rather proves that these amazing creatures are at least as intelligent as we are, if not more-so. This film certainly isn't 'Flipper' or even remotely a feel-good type movie. It is realistic in the sense that the government loves to meddle where they don't belong, though it truly does invoke compassion for these mammals of the sea.
You could also read "So Long and Thanks for All the Fish" and that, too will convince you dolphins are our mental superiors...
続きを読む
17人のお客様がこれが役に立ったと考えています
レビュー を日本語に翻訳する

MovieBuff_VA
5つ星のうち5.0 Planet of the Apes with Fish
2013年5月11日 - (Amazon.com)
Amazonで購入
This was a later try at science fiction using a dolphin and George C. Scott with his baby wife Trish Van De Veer. I believe that George C. Scott is almost always a riveting actor. It must be his serious demeanor. But I was hooked. I couldn't resist the idea that man could have a real relationship with a dolphin. They are so smart and they seem to be gentle. I don't know it that is really true, but it seems to be. When I discovered what the government was doing with them, I was so angry. What a perversion of something so soft and gentle and so smart.
続きを読む
6人のお客様がこれが役に立ったと考えています
レビュー を日本語に翻訳する
Amazon.comのカスタマーレビューを見る(52) 5つ星のうち4.3
Amazonプライム会員ならお急ぎ便、日時指定便が使い放題
さらに、映画もTV番組も見放題。200万曲が聴き放題 。クラウドに好きなだけ写真も保存可能。
> プライムを無料で試す