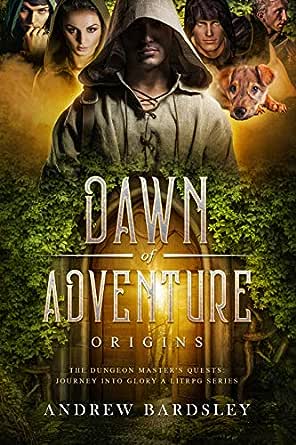 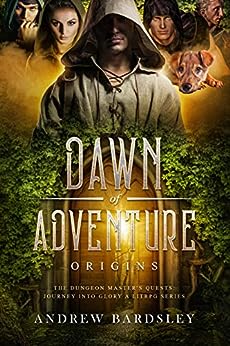 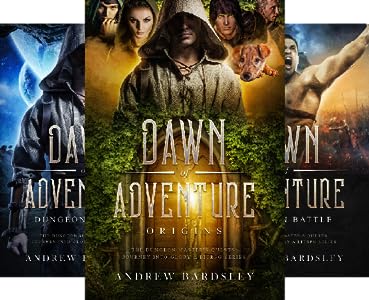 The Dungeon Master's Quests: Journey into Glory (A LitRPG Series)
Book 1
Author’s Note 22 Aug 2019
The version of the book has been updated after additional proof-reading.
When apprentice adventurer Ceres discovers his physical and mental attributes are far above normal for someone his age, he suspects there must be a reason. Despite his inability to discern the forces at work in his life, he manages to recruit companions also searching for a way to make their mark in the world. Their colorful personalities are a challenge for the young leader, but his vision still inspires them to follow where he leads, for now. It isn't until later Ceres discovers he commands the powers of a Dungeon Master, and can establish his own shadowy domain beneath the sunlit land of mortals. Yet despite his new skills, all is not well. Ceres' exploration of the dark places have attracted the attention of formidable and lethal adversaries, and they covet the young adventurer's growing lair. Ceres knows he is overmatched, but he also knows there are greater powers to be had if he and his fellow adventurers can reach a high-enough level. Now, with hideous monsters pouring out of the very walls, and dark forces gathering strength in the inky pits below, Ceres and his rag-tag band of low-level companions must find a way to defend their claim to future greatness before he can truly claim the title of Dungeon Master.

Ty M
5つ星のうち3.0 Proofread, Edit, Republish - Conceptually Good
2019年7月17日 - (Amazon.com)
Readers
Just finished the first 5 books in an afternoon. Decent story, LitRPG lite with dungeon core building flavors; large periods of leveling/building are skipped and consequently experience and level progression is somewhat arbitrary. The story is fairly solid. Overpowered main character twice blessed by fortune (at least) in a world with infinite (it seems) resurrection from violent death. “Nobles” are stupidly arrogant. “Normals” are all pragmatic, peaceful, and apparently unambitious (since they are almost universally stronger than nobles, only inferior because they start less well equipped; it is unclear why the rabble don’t flip the table, apparently paying taxes to idiotic weaklings is awesome fun). Some “normals” become powerful and then, habitually, choose to marry nobles who have great disdain for their yokel powerhouse spouses... again, the “normals” are forgiving unambitious saints. So, if you can look past a few cultural irregularities, and a pile-o’-typos, you may enjoy this fantastic tale. I’m guessing it is planned to be 10-15 books long. (Book content is about 75-80% story, 20-25% advertisements, on average.)

Author...Post something on RoyalRoadL and see if you can contact some people willing to proofread for you.
I'm about 5 pages in and am taking a break to note that the author needs to proofread and republish this here, or get an editor to proofread and correct his story, then republish. Because I know there are several other following books in this series, I'm assuming that the same applies to those works as well.
Best of luck to the author!

Kindle Customer
5つ星のうち2.0 Hard to read
2019年6月23日 - (Amazon.com)
I think the story was pretty decent but there were so many spelling and grammar errors in this book I can barely get through it I ended up skimming it. This book seriously needs a decent editor it's like the author did not read what he wrote it was so bad with the grammar and spelling.
続きを読む
4人のお客様がこれが役に立ったと考えています
レビュー を日本語に翻訳する

Ben
5つ星のうち2.0 Has potential
2019年7月28日 - (Amazon.com)
It appears this may have been written with the use of speech to text programs which are wonderful but do require more effort on your part to ensure you correct the errors that will inevitably occur. I'd like to see you include more content in the future rather than pad the word count by ending the actual story at 77% and stacking the rest of the book with introductions to other stories. Definitely would have been upset if I'd purchased this title rather than read it through kindle unlimited. Tidy up the errors and take your time telling your story and this could easily become an enjoyable afternoon read. That said I'm about to begin the next book and hope to see improvements in your future work and that you'll revisit this and proofread it again.
続きを読む
レビュー を日本語に翻訳する

Richard P. Darby
5つ星のうち3.0 Needs an editor
2019年7月28日 - (Amazon.com)
I have only just started this book and it is a difficult read. It'seems as though English is not the authors first language. When the cleric is introduced, her name is omitted, then when her name is stated as Semana, it'seems quickly changed to Symania. There are also many words missing or out of order, as I said, a difficult read. Last, I would never pay $4.85 for a book that has less than 150 pages, especially since there are better books that are three times as long. This should cost less than $3.00, ideally, $1.99
続きを読む
レビュー を日本語に翻訳する

Kindle Customer
5つ星のうち3.0 Good story. But really needs an editor!!
2019年6月18日 - (Amazon.com)
,,I actually liked the story even though I had to read some sections several times due to spelling and grammar errors.
My best guess. Is English is not the authors first language and the translation was done very poorly. Which is a shame because the story is interesting. Hope the author can get some one to help fix the book.
続きを読む
1人のお客様がこれが役に立ったと考えています
レビュー を日本語に翻訳する
Amazon.comのカスタマーレビューを見る(14) 5つ星のうち2.6
click to open popover
Amazonプライム会員ならお急ぎ便、日時指定便が使い放題
さらに、映画もTV番組も見放題。200万曲が聴き放題 。クラウドに好きなだけ写真も保存可能。
> プライムを無料で試す