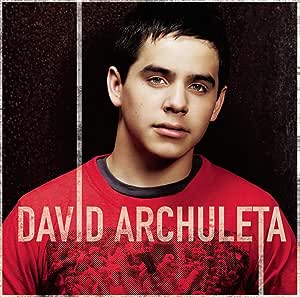 American Idol Season 7 fan favorite, David Archuleta has become a household name as he spent his 2008 summer on the nationwide American Idol tour with his fellow contestants. This album includes a sequence of Pop tracks from the industry's most talented writers and producers. Archuleta's first single 'Crush' was produced by Emanuel 'Eman' Kiriakou.

daveyp.
5つ星のうち5.0 Music that takes me to the stars...
2011年6月10日に英国でレビュー済み
Amazonで購入
...which is exactly the effect that this CD has on me. David Archuleta's voice is truly amazing. Words don't do justice to how much I love his singing and this CD. Picking out the best songs is really difficult, but if you forced me to, I would choose Track4 'My Hands' and Track8 'Desperate'. I don't think any other CD in recent years has given me so much pleasure as this one.
続きを読む
役に立った
フィードバックを送信中...
フィードバックをお寄せいただきありがとうございます。
申し訳ありませんが、お客様の投票の記録に失敗しました。もう一度試してください。
違反を報告
レビュー を日本語に翻訳する

Gooner Till *i
5つ星のうち4.0 Bought For A Friend
2013年5月2日に英国でレビュー済み
Amazonで購入
The product was In good shape an d arrived very quickly, the price was attractive and was chosen for this reason. The present was for a friend, who has since spoken to me and has told me how much she has enjoyed It. Unfortunately I am In no position to review It properly as It has been given as a present and I have not 'listened to It, hence the 4 star rating Is based purely on product and delivery.
続きを読む
1人のお客様がこれが役に立ったと考えています
役に立った
フィードバックを送信中...
フィードバックをお寄せいただきありがとうございます。
申し訳ありませんが、お客様の投票の記録に失敗しました。もう一度試してください。
違反を報告
レビュー を日本語に翻訳する

Michael Morales
5つ星のうち3.0 David Archuleta-It grows on you.
2009年6月25日にアメリカ合衆国でレビュー済み
Amazonで購入
I expected the album to be more R&B or Pop, but was pleasently surprised by the overall feel. It has some catchy "sing songy" tracks like, "Touch my Hands" and "Barriers". It has your obvious radio singles like, "Crush", "Running" and "A Little Too Not Over You"; the very mellow almost James Taylor/Stephen Bishop-ish "You Can"; a couple really nice ballads with JC Chasez and Kara DioGuardi, which they co-wrote with David and even sang background vocals. And of course, a slighlty slower version of the Robbie Williams cover, "Angels", which I think is better than the Idol version.

My favorite track is the "almost" duet with Kara DioGuardi, "To Be With You".

I really hate the second to the last track "Your Eyes Don't Lie". It's weird. The whistle sound makes it seems like a western movie theme song, totally doesn't fit with anything else.

Overall a very good first try. Kind of reminds me of Nick Lachey, vocally, although they have completely different styles. This is the kind of album that grows on you. I'm looking forward to seeing which way he'll go with the next one.
続きを読む
3人のお客様がこれが役に立ったと考えています
役に立った
フィードバックを送信中...
フィードバックをお寄せいただきありがとうございます。
申し訳ありませんが、お客様の投票の記録に失敗しました。もう一度試してください。
違反を報告
レビュー を日本語に翻訳する

jy24
5つ星のうち5.0 This album is AMAZING!
2008年12月1日にアメリカ合衆国でレビュー済み
Amazonで購入
This album is amazing! I loved every song on the first try. I've had this CD since the debut and heard it constantly, but I'm still not sick of it! Usually it takes me a while to like a whole album and if I did, I'd get sick of it within a few weeks. I'm still not sick of the song "Crush" and it's been out for months! All his songs are pretty catchy. Not only are these songs great, but I think it's AMAZING because of his vocals. His pure voice is rare and beautiful.

Yes, this album is focused more on the teens/younger crowd, but I think there's at least one song that anyone can enjoy. This album has a variety of pop songs (not only focused on one type of pop). It's a bit of a tester album where you can see (maybe) what direction he may go in the future.

If you watched him on American Idol and was disappointed by him only singing ballads, this album is NOT only full of ballads, although there are some. And personally I think his ballads are beautiful! It really features how amazing his vocals are.

My favorites are Crush, You Can, A Little Too Not Over You & Waiting For Yesterday (although that song is sadly not on the main album). The bonus tracks are great so if you like the album, you should listen to the bonus tracks also!

Overall, I highly recommend this album. Give it a try if you haven't yet. This is a great debut!

Michael Angelo Velasquez
5つ星のうち5.0 A wonderful start... David rocks! :)
2016年1月25日にアメリカ合衆国でレビュー済み
Amazonで購入
I got so happy when I saw that my only one favorite from American Idol - Season 2008 was going to release his first album!!! David captivated me since the first time I saw him audition! When I saw the cover art for this album, I said "WOOOOW!"... Beautiful! :) I love the way he looks there... His gaze is so strong and I feel very good energy!!! Now, musicwise, it's a whole amount of awesomeness!!!! David vocals are perfect, the arrangements are wonderful, very catchy melodies. :) It was very cool to see that he included his version of "Angels" which I really like.. I feel the emotion, the sincerity... well, there and in the rest of the songs! ;)

Steven Haarala
5つ星のうち4.0 The True American Idol
2009年1月28日にアメリカ合衆国でレビュー済み
Amazonで購入
As far as I'm concerned, the American Idol for 2008 is David Archuleta, so I anticipated this album and wanted it to be good. And it is. I had to listen to it several times in order to form an objective assessment, and now I am ready. To begin with, the material is just what you would expect from a first album by a 17-year-old AI contestant. Most of the songs are not there to showcase his real vocal talents, but rather to please his fan base and fit comfortably into the Top Forty. That doesn't mean that he doesn't sing them well. On the contrary, his voice and his natural inclination to be a singer make it sound like he's been doing this for years, when the truth is that probably just over one year elapsed between his AI audition and the release of this CD. I'd say that's pretty good. "Crush" was an excellent choice as a single to introduce him to the pop world. I especially like the refrain "...this crush ain't going away-ee-ay-ee-ay-ee-aaaay." Very appealing.

However, David and his people had a little surprise in store for us. The last 3 tracks differ strongly from the first 9. In "Don't Let Go" he sounds much more like a mature vocalist than a young teen idol. The melody is more challenging, and his voice sounds, well, more confident and more sophisticated. All of a sudden, he's a young man, not a boy. This sudden maturity continues in "Your Eyes Don't Lie", which is almost bluesy. Again, the vocal performance is given greater emphasis than on other tracks. The concluding track, "Angels", is a strong ballad in the tradition of what made him succeed on AI in the first place. His vocal is not lost in the rich production; he rides the tide like a veteran performer, which his fans know that he will become, given time. I expect we'll hear more of this maturity on his next album. I definitely hope so.
続きを読む
3人のお客様がこれが役に立ったと考えています
役に立った
フィードバックを送信中...
フィードバックをお寄せいただきありがとうございます。
申し訳ありませんが、お客様の投票の記録に失敗しました。もう一度試してください。
違反を報告
レビュー を日本語に翻訳する

HardyBoy64
5つ星のうち5.0 This is an amazing debut!
2008年11月12日にアメリカ合衆国でレビュー済み
Amazonで購入
I would recommend this CD to anyone who enjoys fun, pop songs and beautiful slower acoustic music. Archie's voice is simply fantastic! Anyone who gave this CD a 1 star review does not recognize the beauty and uniqueness of Archuleta's voice. You may not like this style of music, but 1 star? Not with that voice. He reminds me of Karen Carpenter a bit, in that she recorded some really BAD songs (Goofus? Intermission? Calling Occupants?), but regardless of the songs themselves, her voice was SO compelling and beautiful. For me, Archie is the same way. It's true that I don't love all of the songs on this CD, but his VOICE makes up for that! 5 stars.
続きを読む
1人のお客様がこれが役に立ったと考えています
役に立った
フィードバックを送信中...
フィードバックをお寄せいただきありがとうございます。
申し訳ありませんが、お客様の投票の記録に失敗しました。もう一度試してください。
違反を報告
レビュー を日本語に翻訳する

Colt-SL
5つ星のうち5.0 Best young male voice in quite some time...
2009年8月31日にアメリカ合衆国でレビュー済み
Amazonで購入
Following David's progress on American Idol, I couldn't wait for the show to finish so I could buy his first album; I enjoyed his voice and magnificent singing ability that much. So was I pleased with this album? Oh, yes - it far surpassed my expectations. His style is clear and easy and each song comes across so naturally for him. Not a bad selection in the entire album. Listen to the CD more than once and you will have many of his songs run through your head; and that's a good thing!
続きを読む
4人のお客様がこれが役に立ったと考えています
役に立った
フィードバックを送信中...
フィードバックをお寄せいただきありがとうございます。
申し訳ありませんが、お客様の投票の記録に失敗しました。もう一度試してください。
違反を報告
レビュー を日本語に翻訳する

Trudy
5つ星のうち5.0 Great album by great artist
2010年8月20日にアメリカ合衆国でレビュー済み
Amazonで購入
I am a big fan of David Archuleta's and actually recently purchased another one of David's CDs to gift to a fan of David's in Peru. Even though this album was made in 2008, I still listen to it all the time. David's voice is amazing. I can't wait for his album to be released October 5, 2010. David has grown a lot in two years and has been a lot more involved with the writing of the songs on this new album so I'm excited to purchased that one next! But this album is really good!
続きを読む
役に立った
フィードバックを送信中...
フィードバックをお寄せいただきありがとうございます。
申し訳ありませんが、お客様の投票の記録に失敗しました。もう一度試してください。
違反を報告
レビュー を日本語に翻訳する

Maggie
5つ星のうち5.0 Crush = Most Beautiful Song, Ever! (In My Opinion)
2010年8月9日にアメリカ合衆国でレビュー済み
Amazonで購入
I can't say enough good things about this album! Crush by David Archuleta has been my all-time favorite song since the first time I heard it, and other songs on this album are just as good. I especially like crush, though, because I could relate to the lyrics more and the music video was absolutely amazing too, so check that out on YouTube if you can.