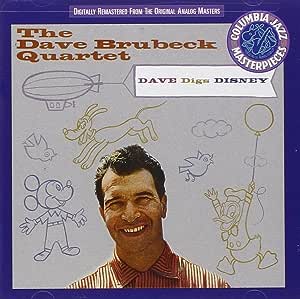 I'm a lot more familiar with Disney, particularly with the soundtrack music to most of the animated features including those represented on this disc, so this was a natural pick for me.

I enjoy it as a jazz disc, but it isn't particuarly Disney for more than a few measures at the beginnings and endings of songs. It's all very beatuifly done with both wit and affection for the original material, but if you're looking for something different to add to your Disney collection and you're not a fan of tight, free form jazz ensembles performing extended improvisations, you may want to pass on this one.

If you're not a Disney fan, don't let the association stop you from making this your next jazz purchase. It's the sound of four guys with some serious chops that are clearly having a lot of fun.
続きを読む
4人のお客様がこれが役に立ったと考えています
役に立った
フィードバックを送信中...
フィードバックをお寄せいただきありがとうございます。
申し訳ありませんが、お客様の投票の記録に失敗しました。もう一度試してください。
違反を報告
レビュー を日本語に翻訳する

B. Rubin
5つ星のうち5.0 Magical Music for All Ages!
2008年1月20日にアメリカ合衆国でレビュー済み
Amazonで購入
I bought this CD for our family to listen to in the car, hoping for a respite from the usual arguments over choosing radio stations. It was a wonderful choice! My kids, ages 3 and 7 both enjoy listening to the music; they sit, mesmerized and quiet as Dave and his band play. The operative word is QUIET. The music uses Disney as the basis for the songs, but the jazz improvisation transcends the mundane and makes these tunes fanciful, fun, and interesting. I'm not a jazz expert, but as an everyday music pleb, I recommend this album. We listen to 'Dave Digs Disney' on a weekly basis, and it is so varied that nobody gets tired of listening.
続きを読む
5人のお客様がこれが役に立ったと考えています
役に立った
フィードバックを送信中...
フィードバックをお寄せいただきありがとうございます。
申し訳ありませんが、お客様の投票の記録に失敗しました。もう一度試してください。
違反を報告
レビュー を日本語に翻訳する
その他の国際レビューを読み込む

Dan Feldman
5つ星のうち5.0 Three Interesting Things About This Album...
2012年6月2日にアメリカ合衆国でレビュー済み
Amazonで購入
...and here they are:

1)Disney Hates Dave? According to George Avakian's liner notes, Brubeck wanted the album cover to be a photo of the Dave Brubeck Quartet and all of Dave's kids posing at some picturesque Disneyland attraction. Disney would not allow this ("...we could certainly see Walt's reluctance to have (the word "Disneyland") appear in the title of another company's product," the notes state. So the cover is merely adorned with sketches of Disney characters instead(no inks, no characters fleshed out, just cheap-o sketches).

BUT for some reason, Disney let an inferior, moldy-fig, quasi-Dixieland group (The Firehouse Five +2) pose in Disneyland (in teacups in Fantasyland, yet) for one of their stupid album covers. In fact, this album was even recorded IN Disneyland and used the word "Disneyland" in the title of their album, which appeared on the Bad Ti..., er, Good Time Jazz label, a subsidiary of Contemporary records, which was not associated with Disney in any way. They were allowed to do this with Disney's blessing, but the Dave Brubeck Quartet, who had been playing all of the numbers in this album for YEARS (thereby giving free publicity for the various Disney movies the songs derived from) were not allowed to? I just don't get it! (Yeah, I know that the FF+2 were animators at Disney Studios, but it's still a double-standard.) Can someone explain this to me?

2)I was playing this album for a friend of mine who's a Brubeck fan but had never heard the album.
"Wow," he said, "Eugene Wright really kicks butt on this one! I've never heard him play with such passion and such a full, rich tone and swing so hard!"

That's because the bassist here is not the overrated Gene Wright, but Norman Bates (no, not THAT one!), who is the finest bass player Brubeck ever employed. Proof? This album and the earlier Brubeck Time and Jazz Goes to Junior College will bear me out. And, yes, my friend is correct: Bates swings like the Dickens here and has a much fuller, richer sound than Wright. You can barely hear Wright on most of the Brubeck albums he's on, but Bates comes through loud and clear. (Sorry, PC gang. I know it's an unwritten rule of Political Correctness that you mustn't criticize a black musician, or--even worse to the liberal mind--state that a white musician in a similar role is superior in any way, but I don't care about PC, I'm just going by what my ears tell me. I also feel that Alan Dawson was a better drummer than Joe Morello, but I'll save that for a future review, maybe Last Set at Newport.)

3)The Dave Brubeck Quartet was a group that died a little every time they entered a recording studio. It's common knowledge that the quartet was at their best live, but here is a studio recording by the group with that "live feel." Paul Desmond, in particular, is in superb form. Heck, they all are. The quartet is relaxed yet impassioned at the same time.

Also, I must mention that the two unreleased bonus tracks ("Very Good Advice" and "So This is Love") are excellent, and the latter is one of the best, and most firey, tracks in entire album