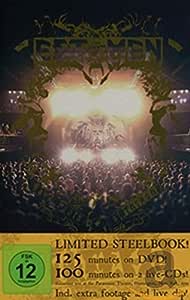 2013 three disc (two CD + DVD) set documenting the Bay Area veterans' sold-out headlining performance at the Paramount in Huntington, NY in February. Dark Roots Of Thrash was produced by Get Hammered Productions, directed by Tommy Jones and mixed by Juan Urteaga. It captures a total of 19 live tracks with countless cams onstage and high above the audience, plus a special moshpit cam that makes you feel like you're a part of the show!

S. Lornie
5つ星のうち5.0 Great Live Record
2019年8月27日に英国でレビュー済み
Amazonで購入
Testament have always been one of my favourite thrash metal bands. They ooze a certain professionalism that you don't get with a lot of thrash bands. It appears that they are a band that never stops working. When they're not in the studio recording something, they're out there in front of their fans doing what they do best. With the band's impressive work ethic, their live albums always turn out to be extremely enjoyable and this CD/DVD package, Dark Roots of Thrash is no different.

Dark Roots of Thrash is as I mentioned above, a 2xCD/DVD package that shows off Testament doing what they do best, playing in front of an energetic excited live crowd. The album was recorded at The Paramount Theatre in Huntington, New York on February 15th, 2013. The album is currently still available on DVD, Bluray and even on vinyl. I personally picked up the DVD copy as the video quality isn't as important for a show like this as it is for say a KISS concert. I was not disappointed.

As the title suggests, the band were out on the road in support of their then latest album, Dark Roots of Earth. A record which is (in my opinion at least) a modern thrash metal classic. The album is represented in this live release with excellent renditions of the songs, Rise up, Native Blood, True American Hate and even the album title track. The Formation of Damnation is also represented with the awesome track, More Than Meets the Eye and again, the album title track. Being a band from the '80s, it's only natural to hear songs from their classic albums like with songs like, Disciples of the Watch, Over the Wall, Into the Pit, Practice What You Preach etc. There's also four tracks from The Gathering but none from The Ritual and Demonic, sadly. Either way, it's a great set list with lots of momentum and it goes by awfully quick.

Fans will be happy to know that Dark Roots of Thrash hasn't been too over cooked. It's definitely a little loud but the music sounds really good cranked up. The band in general sound fantastic, as I would expect from musicians with their abilities. The lead solos from Alex Skolnick are through the roof (and perfectly backed up Eric Peterson), one of the reasons why I consider him one of the best, most tasteful guitarists of his generation. I also loved the drums and bass by Greg Christian and Gene Hoglan. I have always felt that the former has always been a wasted talent in music, but Greg is in all his glory here. Shame it didn't last. Chuck Billy just does what Chuck Billy does. This guy still sounds fantastic singing these songs, even after all those years on the road and ill health. In terms of American thrash metal vocalists, I have always considered Chuck as one of, if not the best. He has a very distinct tone in his bark and has a nice singing voice to contrast it. Something that he doesn't use enough in my opinion.

In terms of live albums from Testament, I would consider this to be their best one. Live At the Fillmore and Live in London were both very good in their own way and Live at Eindhoven '87 just doesn't sound nearly as good. By comparison, Dark Roots of Thrash is very professionally recorded and really catches these musicians at their best. I caught them on tour in London not long after this and they were just as good. The music still sounds fresh (after all these years) and that is something that is VERY hard to do after thirty years. It's a great souvenir for fans of the band and it's absolutely worth picking up if it remains at the £9 asking price.
続きを読む
違反を報告
レビュー を日本語に翻訳する

Del
5つ星のうち5.0 It practises what it preaches!!!
2017年2月6日に英国でレビュー済み
Amazonで購入
Dark roots of Thrash on blu ray capture a band that seems to get better and better with age. That being said they have been a fairly consistent metal band throughout their career releasing a steady flow of great metal albums but it’s really in the last 9 years that some of their finest work has come out, which equals and in some parts betters there so called ‘classic era’ in my opinion. I truly believe this has to do with the return of a one Mr Alex Skolnick. Onto the blu ray itself, I must say the picture quality is good, not great it’s not as high definition as I’d like it can be quite grainy in parts but maybe that’s just me! Also it tries to be all “artistic” in sections by splitting the screen in half, it’s minimal but not really needed. The sound quality however (which is what it’s all about) it’s exceptional. The songs really pop out of the speakers with clarity and utter heaviness, it’s great! The set list is brilliant as well as most of the ‘big hits’ are there alongside newer releases. Overall it’s a great disc for any Testament fans. To sum up: Chill the beer, get your battle jacket on and crank it up very loud and before long you’ll be air guitaring/drumming or whatever!!!
続きを読む
1人のお客様がこれが役に立ったと考えています
違反を報告
レビュー を日本語に翻訳する

laurence turner
5つ星のうち5.0 brilliant
2015年10月7日に英国でレビュー済み
Amazonで購入
Superb live performance by a band every bit as talented as the so called big four.Picture and sound quality are superb as the band plogh through a mixture of old and new.Unlike many other bands the new material is up to standard and all band members perform to a high standard especially Eric Peterson;the most improved guitarist in thrash.
続きを読む
1人のお客様がこれが役に立ったと考えています
違反を報告
レビュー を日本語に翻訳する