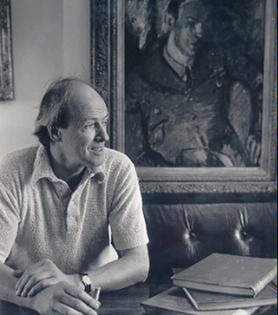 WHEN I was four months old, my mother died suddenly and my father was left to look after me all by himself. This is how I looked at the time.

I had no brothers or sisters.

So all through my boyhood, from the age of four months onward, there was just us two, my father and me.

We lived in an old gypsy caravan behind a filling station. My father owned the filling station and the caravan and a small meadow behind, but that was about all he owned in the world. It was a very small filling station on a small country road surrounded by fields and woody hills.

While I was still a baby, my father washed me and fed me and changed my diapers and did all the millions of other things a mother normally does for her child. That is not an easy task for a man, especially when he has to earn his living at the same time by repairing automobile engines and serving customers with gasoline.

But my father didn't seem to mind. I think that all the love he had felt for my mother when she was alive he now lavished upon me. During my early years, I never had a moment's unhappiness or illness, and here I am on my fifth birthday.

I was now a scruffy little boy as you can see, with grease and oil all over me, but that was because I spent all day in the workshop helping my father with the automobiles.

The filling station itself had only two pumps. There was a wooden shed behind the pumps that served as an office. There was nothing in the office except an old table and a cash register to put the money into. It was one of those where you pressed a button and a bell rang and the drawer shot out with a terrific bang. I used to love that.

The square brick building to the right of the office was the workshop. My father built that himself with loving care, and it was the only really solid thing on the place. "We are engineers, you and I," he used to say to me. "We earn our living by repairing engines and we can't do good work in a rotten workshop." It was a fine workshop, big enough to take one automobile comfortably and leave plenty of room around the sides for working. It had a telephone so that customers could ring up and arrange to bring their cars in for repair.

The caravan was our house and our home. It was a real old gypsy wagon with big wheels and fine patterns painted all over it in yellow and red and blue. My father said it was at least one hundred and fifty years old. Many gypsy children, he said, had been born in it and had grown up within its wooden walls. With a horse to pull it, the old caravan must have wandered for thousands of miles along the roads and lanes of England. But now its wanderings were over, and because the wooden spokes in the wheels were beginning to rot, my father had propped it up underneath with bricks.

There was only one room in the caravan, and it wasn't much bigger than a fair-sized modern bathroom. It was a narrow room, the shape of the caravan itself, and against the back wall were two bunk beds, one above the other. The top one was my father's, the bottom one mine.

Although we had electric lights in the workshop, we were not allowed to have them in the caravan. The electricity people said it was unsafe to put wires into something as old and rickety as that. So we got our heat and light in much the same way as the gypsies had done years ago. There was a wood-burning stove with a chimney that went up through the roof, and this kept us warm in winter. There was a kerosene burner on which to boil a kettle or cook a stew, and there was a kerosene lamp hanging from the ceiling.

When I needed a bath, my father would heat a kettle of water and pour it into a basin. Then he would strip me naked and scrub me all over, standing up. This, I think, got me just as clean as if I were washed in a bathtub probably cleaner because I didn't finish up sitting in my own dirty water.

For furniture, we had two chairs and a small table, and those, apart from a tiny chest of drawers, were all the home comforts we possessed. They were all we needed.

The lavatory was a funny little wooden hut standing in the meadow way back of the caravan. It was fine in summertime, but I can tell you that sitting out there on a snowy day in winter was like sitting in an icebox.

Immediately behind the caravan was an old apple tree. It bore fine apples that ripened in the middle of September. You could go on picking them for the next four or

five weeks. Some of the boughs of the tree hung right over the caravan and when the wind blew the apples down in the night, they often landed on our roof. I would hear them going thump... thump... thump... above my head as I lay in my bunk, but those noises never frightened me because I knew exactly what was making them.

I really loved living in that gypsy caravan. I loved it especially in the evenings when I was tucked up in my

bunk and my father was telling me stories. The kerosene lamp was turned low, and I could see lumps of wood glowing red-hot in the old stove, and wonderful it was to

be lying there snug and warm in my bunk in that little room. Most wonderful of all was the feeling that when I went to sleep, my father would still be there, very close to

me, sitting in his chair by the fire, or lying in the bunk above my own.

Roald Dahl (1916-1990) was born in Wales of Norwegian parents. He spent his childhood in England and, at age eighteen, went to work for the Shell Oil Company in Africa. When World War II broke out, he joined the Royal Air Force and became a fighter pilot. At the age of twenty-six he moved to Washington, D.C., and it was there he began to write. His first short story, which recounted his adventures in the war, was bought by The Saturday Evening Post, and so began a long and illustrious career.

After establishing himself as a writer for adults, Roald Dahl began writing children’s stories in 1960 while living in England with his family. His first stories were written as entertainment for his own children, to whom many of his books are dedicated.

Roald Dahl is now considered one of the most beloved storytellers of our time. Although he passed away in 1990, his popularity continues to increase as his fantastic novels, including James and the Giant Peach, Matilda, The BFG, and Charlie and the Chocolate Factory, delight an ever-growing legion of fans.

What a child wants
- and DESERVES -
is a parent who is
SPARKY!

Dave Bloomer
5つ星のうち5.0 A gem from childhood.
2018年6月30日に英国でレビュー済み
Amazonで購入
I remember reading this many years ago and it leaving me with an enormous joy. So years later as a man in his 40's, I thought I'd revisit it and see if it was as good as I remembered it; it was even better. Reading a Roald Dahl book is stepping into a bright and wonderful world. I felt a connection to both Danny and his father. A really warm story for children of any age.
続きを読む
9人のお客様がこれが役に立ったと考えています
違反を報告
レビュー を日本語に翻訳する

Freewheeling
5つ星のうち5.0 Absolute classic short story that Adults can enjoy today.
2020年11月5日に英国でレビュー済み
Amazonで購入
An absolute classic of a children's book. I read when it was first published and it's stayed in my emotional memory ever since. I read it again but this time as an adult well into the second half of his life. It reads well as a short story for adults and it stands up well in our modern world in terms of commenting on society and the relationship between a father and son.
続きを読む
1人のお客様がこれが役に立ったと考えています
違反を報告
レビュー を日本語に翻訳する

Mr. W. Welsford
5つ星のうち5.0 Improve your child's School Literacy by reading above their "level"
2014年9月23日に英国でレビュー済み
Amazonで購入
My 7 year old son loves me (Dad) reading this to him at bedtime. Today he wanted me to read the rest of it instead of his allocated "screen-time." He also loved The Twits, and George's Marvelous Medicine, but this is his favorite. I have also read him Harry Potter, and since that, his school reading levels have rocketed up. Keep reading your child something above their level, as well as getting them to read their school books to you, almost guarantees success in Literacy at school. I'm sure in a year or two he could read the books himself. By the way, I am not an avid pleasure-reader, myself, but I understand how important it is for him.
続きを読む
6人のお客様がこれが役に立ったと考えています
違反を報告
レビュー を日本語に翻訳する

M - L P
5つ星のうち5.0 Danny Champion of the World
2012年4月22日に英国でレビュー済み
Amazonで購入
This audiobook tells a very nice story of a happy young boy and his gorgeous father, who live in an old gypsy caravan without electricity in it. His mother died when he was a little child. The father is working in his own small gas station and workshop where his son Danny learns very much about cars, even to drive one. Their living is economically poor but by no means empty, they love and adore each other.
Their big adventure where Danny needs his skill to run a car is connected with poaching pheasants and sabotaging the great hunting party of the rich landowner, and during these events Danny is to become the Champion of the World.
The reader Nathaniel Parker is as exquisite as ever. He is doing all characters many of them most hilarious: nine-year old Danny, his loving father who smiles only with his eyes, the local policeman, the vicar`s wife and others. He brings to life the whole story with incredible brilliance, you could never achieve that by reading the book yourself.
続きを読む
2人のお客様がこれが役に立ったと考えています
違反を報告
レビュー を日本語に翻訳する