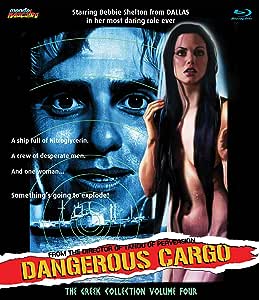 A must see for Deborah Shelton "fans." And horny children of the 80s. Dangerous Cargo is far from being a great film -though it deliberate goods. Truth in advertising, indeed! A Sex and violence fun fest. The entire movie is filmed on a huge ship. The action (and sexual) sequences are professional and competently staged, acted and photographed . The acting is pretty good, and there is a lot of action. Fact is, this film could be seen primarily as erotica (albiet of the roughie' variety) and the only woman in the film is a young and incredibly foxy Deborah Shelton who apparently lived in Greece at the time and it was there where she made her first screen appearances. A fairly (but not too low) low budget flick with some studly Greek action stars none of whom ever made it big outside of Greece, as far as I know. Deborah Shelton is the only real (soon to be) star here and she quite the standout (she was a sexy staple of sexy 80s teevee) of this nautically themed sleaze-fest. Yup, don't worry Deborah Shelton is constantly nude in this film - including some really saucy sex scenes with sailors and pirates - after all, a fella can only go for so long without female companionship while at sea. Glad to see on bluray!