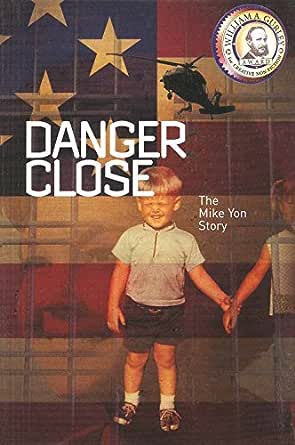 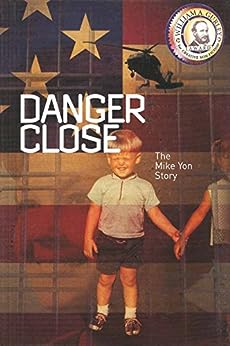 Spanning Yon’s formative years, from the devastation he felt at the loss of his mother at age seven to becoming a Green Beret at 19, Danger Close opens with a proverbial bang. In Ocean City, Maryland, the author is forced to defend himself in hand-to-hand combat and accidentally kills his assailant.

In youth, Michael catches alligators with his bare hands in the state he loves, Florida, which prepares him well for the long years ahead downrange in Iraq, Afghanistan, and beyond.

Fans of his internationally acclaimed first-person dispatches from the front lines, as well as from Thailand, the Philippines, Japan and elsewhere, should not miss the riveting story of his early life and adventures. It is a wonder that he survived.

This is the 5th edition of his first published work.

“Fearless…[Yon] provides a candid, Soldier’s-eye view…from the very unique perspective of being there with them for weeks and months at a time…delv[ing] deep into the human component.” -- General (ret.) David Petraeus, former director of the CIA

“Yon would cover Soldiers the old-fashioned way: He goes down the back alleys and bad roads.” -- Joe Galloway, author of We Were Soldiers Once…and Young.

“His blog inspired so much buzz that by last month only 83 other blogs, out of about 26 million on the Internet, received more links from other websites.” -- Los Angeles Times,

“Cuts through the fog of war…vivid…shocking and mesmerizing.” -- The Boston Herald

“Michael Yon brings it…If you want to know what is going on in the war, read him.” Thomas Ricks, author of Fiasco.

3rd Edition of Danger Close, Winner of the William A. Gurley Award for Creative Nonfiction.

Gary Mauser
5つ星のうち5.0 Wow! What a well crafted coming-of-age tale!
2018年6月30日にアメリカ合衆国でレビュー済み
Amazonで購入
Wow! What a tale! Yon crafts a great story out of his introduction to maturity and the military life. I was a little irritated by his jumping back and forth, but eventually I got the hang of it and found that it enhanced the story more than a straight time line would have.

I heartily recommend this book to anyone who either wants to understand Michael Yon better or who just enjoys military coming of age stories.

Reuben
5つ星のうち5.0 Required reading for aspiring soldiers and good men
2016年11月7日にアメリカ合衆国でレビュー済み
Amazonで購入
Lack of bravado is the mark of great character, and Michael Yon has hit the nail squarely on its head. Don't expect any soldier of fortune nonsense, this book is about respect for oneself and for those in your charge, the love of a mother and zest for life. My wonderful father was a Korean War Marine who spent almost two years recovering from wounds, yet we never heard him chastise his enemy of express disdain for the Korean people, he never bragged or wore his heart on his sleeve and he loved my beautiful mother and his son's with all he had. Manhood is defined by your kindness and decency, and Mr. Yon drives this point home.
続きを読む
2人のお客様がこれが役に立ったと考えています
役に立った
フィードバックを送信中...
フィードバックをお寄せいただきありがとうございます。
申し訳ありませんが、お客様の投票の記録に失敗しました。もう一度試してください。
違反を報告
レビュー を日本語に翻訳する

prospect two
5つ星のうち5.0 A terrific read.
2018年5月27日にアメリカ合衆国でレビュー済み
Amazonで購入
The Author's life, adventures and feelings on full display - felt like I walked with him through all of it (though I an positive i ciuld not have kept up with him on much of it!)

As a father, many nerves hit. Inspired me to try harder and do better.

Ronzo Garbonzo
5つ星のうち5.0 Much more than macho
2007年3月10日にアメリカ合衆国でレビュー済み
Amazonで購入
The thing I will remember most about this book is that, surprisingly, it was a deeply touching tribute to his mother. The military stuff is all extremely interesting, to the point where you won't be able to put it down. But the book goes far deeper. It's a timeless story from the heart -- one that every son wishes he could write for his mother. On the outside, the author is a tough-as-nails soldier. But on the inside, he's still a little boy who continually reaches back to his mother's love to guide him through life. This is as it should be. God bless all the good mothers of the world.
続きを読む
2人のお客様がこれが役に立ったと考えています
役に立った
フィードバックを送信中...
フィードバックをお寄せいただきありがとうございます。
申し訳ありませんが、お客様の投票の記録に失敗しました。もう一度試してください。
違反を報告
レビュー を日本語に翻訳する

Jim Bowden
5つ星のうち4.0 Good book
2001年12月30日にアメリカ合衆国でレビュー済み
Amazonで購入
I thoroughly enjoyed this book in fact I will re-read it again (a rare event in my book reading history!). I just ordered a copy of it for a friend, my 16 year nephew and my dad! I was especially impressed by the award on the front cover for creative non-fiction(hehe).
続きを読む
7人のお客様がこれが役に立ったと考えています
役に立った
フィードバックを送信中...
フィードバックをお寄せいただきありがとうございます。
申し訳ありませんが、お客様の投票の記録に失敗しました。もう一度試してください。
違反を報告
レビュー を日本語に翻訳する

Teddy B
5つ星のうち5.0 great book
2010年6月25日にアメリカ合衆国でレビュー済み
Amazonで購入
GREAT BOOK!!!!
A definite read by a guy who did REAL embedding. Michael Yon has been in Iraq and Afghanistan with the troops dince 1992, not for a weekend!

John G. Wangsgaard
5つ星のうち4.0 How things can go very wrong very quickly
2005年9月17日にアメリカ合衆国でレビュー済み
Amazonで購入
Mr. Yon is currently in Northern Iraq and writes periodic pieces on the web about his experiences with American forces. He is a very dedicated and personable guy who is just trying to do the right thing. I enjoyed this book very much but would have liked to know what happened after the car wreck. How did his SF career end,etc. Anyway those of you who are interested in personal military type accounts will definetly enjoy this book. It received an award for his writing style.
続きを読む
8人のお客様がこれが役に立ったと考えています
役に立った
フィードバックを送信中...
フィードバックをお寄せいただきありがとうございます。
申し訳ありませんが、お客様の投票の記録に失敗しました。もう一度試してください。
違反を報告
レビュー を日本語に翻訳する