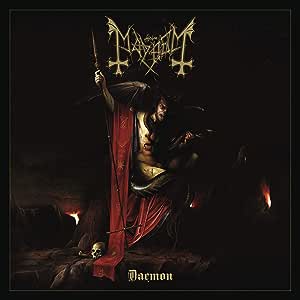 Elizabeth DeGroot
5つ星のうち5.0 Daemon
2019年11月11日 - (Amazon.com)
形式: CDAmazonで購入
This CD comes with the 10 official tracks. The MP3 includes the two bonus track which I didn't realize were present until I read the above review (quite nice to discover two more quality songs to listen to)! Apparentley there is a limited version (500 copies) from Century Media with the bonus tracks included. I received my CD in unsatisfactory condition with cracked jewel case and creased tray card. But, I'm here to review the music as such things happen through the mail that can't be controlled by the shipper.

With "Daemon", we get a more back to basics style of Mayhem. They nailed it down as far as a more focused songwriting and production. It seems it was conscience effort from what I have read from interviews within the band.

I think the transition and inspiration was natural because of the long tours playing the De Mysteriis album in its entirety every night. You can find nods from De Mysteriis era with about every aspect of the album; from Attila's expressive vocals, Hellhammer's massive drum sound (massive tom roles that fill up the room), some of Mayhem's 'Life Eternal' crawling bass lines, and the more compact, simpiler guitar riffs. Gone are some of the meandering moments that were present on "Esoteric Warfare" and past albums. While I found Esoteric to be a very descent album by Mayhem's standard, it wasn't one that I felt I gravitated to very often. I know with "Daemon" that I will sit down with this album more often as it has a focused flow and energy that keeps me engaged throughout.

I'm very pleased that for once Hellhammer's drum sound is in line with a more authentic drum sound. It is the kind of drum sound that I loved on the "De Mysteriis Dom Sathanas" album. Gone is the sterile snare sound and over-triggered bass/toms which I always felt marred his performance.

But that is were the similarities mostly end for me because the album has its own character. Ghul also was a part of the writing process this time and their seemed to be a more collaborative effort with the lyrics. Teloch still wrote the majority of the album (seven of ten tracks) but I think he has a better footing in the band this time around and it comes forth in the songwriting. To me, he sounded more like a hybrid of Blasphemer's style of playing on Esoteric. "Daemon" is filled with outstanding riff after riff.

I think this might be Attila's best performance to date. Some of my favorite parts of the album are his clean vocals. They are almost operatic in a way but also mysterious sounding. Used only in small doses as to give the album a more majestic sound and another dimension (those vocals coincides with the diabolical cover art to me). I don't think it can be overstated just how much character he adds to this album. I never much enjoyed Maniac's style of vocals as I found it a bit grating and one-dimensional after repeated listens. I listened to Attila first with my introduction to Mayhem when De Mysteriis was released.

Not much more that I'd like to add, that as fan of the band since around 1994, this might be the first Mayhem release outside of De Mysteriis that I find I like more as a whole rather than a sum of its parts. As much as I reference that legendary album I don't think "Daemon" sounds like a band chasing its past but rather releasing a authentic and fresh sounding Mayhem record.
続きを読む
10人のお客様がこれが役に立ったと考えています
レビュー を日本語に翻訳する

Mr. James
5つ星のうち5.0 The Past is Alive and well
2019年11月11日 - (Amazon.com)
形式: CDAmazonで購入
First of all, this is the standard jewel case version with 10 tracks.
People need to understand that. I would also like to mention that my cd arrived a day late.
It was supposed to arrive on Sunday, November 10. So much for Prime Delivery, lol.

Fans were wondering, what sort of album are Mayhem going to release? Their last album, Esoteric Warfare was ok in my opnion. When I first heard Of Worms and Ruins, I was impressed. Has Mayhem gone back to their roots? I would have to give an emphatic
yes. Some time ago, they released DMDS alive. Maybe that album was a sign of things to come? It has certainly come to fruition.

To sum it all up, this album is stripped down, fast Norwegian black metal. No more experimental b.s. here. I would describe it as DMDS 2019, modern version. You can definitely hear influences from Burzum, Marduk, Behemoth, and many others. All 10 songs are awesome, no fillers here. If you buy the digi-pak version, it has a
couple of bonus tracks. Daemon is definitely Mayhem's best and accessible album in quite some time. Dead and Euronymous would certainly be proud and approve of this album. Definitely a must buy album for Mayhem fans.
続きを読む

Barry Lent
5つ星のうち4.0 NOT bonus track version!
2019年11月9日 - (Amazon.com)
形式: CDAmazonで購入
Purchased as a pre order that stated bonus track version. Only the included MP3 rip has the bonus tracks. The physical CD copy is the standard jewel case edition without the extra two tracks. Buy this elsewhere, as the bonus tracks are two of the best on the album and are essential for the Mayhem fans.
続きを読む
3人のお客様がこれが役に立ったと考えています
レビュー を日本語に翻訳する

ZadNostrom
5つ星のうち5.0 Metal That Is Pitch Black
2019年12月12日 - (Amazon.com)
Amazonで購入
Mayhem return to form and release (IMO) the best Black Metal album of 2019. Daemon is Mayhem's best album since De Mysteriis Dom Sathanas and their current lineup is the best Mayhem has ever been. The album's sound is heavy, evil, intensely dark, and is sure to please the trve cvlt faithful. If you like your Metal Pitch Black then you will love this album. Highly recommended!
続きを読む
1人のお客様がこれが役に立ったと考えています
レビュー を日本語に翻訳する
Amazon.comのカスタマーレビューを見る(11) 5つ星のうち4.6
Amazonプライム会員ならお急ぎ便、日時指定便が使い放題
さらに、映画もTV番組も見放題。200万曲が聴き放題 。クラウドに好きなだけ写真も保存可能。
> プライムを無料で試す