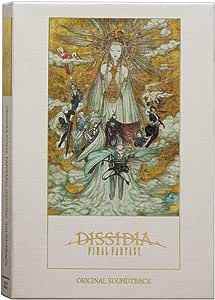 Shadowphoenix
5つ星のうち3.0 More good than bad......barely
2013年8月6日にアメリカ合衆国でレビュー済み
Amazonで購入
The Dissidia Final Fantasy Original Soundtrack is the soundtrack to the PSP fighting game Dissidia. The music consists of tracks from Final Fantasy I-XII, in either in their original form or arranged by composer Takeharu Ishimoto. On top of the arrangements, he also composed some original pieces and vocal songs for this soundtrack. Now his arrangements are a metaphorical swinging for the fences, if you will. Like the baseball analogy suggests, some songs are home runs and some songs are strikeouts. The good news is the great arrangements, along with the very good original compositions by Takeharu make up for the mangled arrangements on the album. My favorite arrangements are tracks 8,11,12,19,23 and 27 on Disc 1 and tracks 1,6 and 24, which is a medley of all the Ending Themes from Final Fantasy I-X, on Disc 2.

Elder Dragon Legend
5つ星のうち3.0 A decent soundtrack, but nothing to write home about.
2010年8月23日にアメリカ合衆国でレビュー済み
Amazonで購入
This is a decent sampling of music from all of the Final Fantasy games. The orchestrations range from decent to pretty bad. There are a couple of standout pieces, but this two-disc set simply can't help but be what it is: average.

Unfortunately, this soundtrack doesn't really know what to do with that music. The main themes for each game are (for the most part) done reasonably well. But the actual fighting music is hit and miss. If you like FFVIII's combat music, prepare for disappointment, as this soundtrack stomps on it. If you like FFIV's music, particularly Fight 2, you'll be in for... average? It's OK overall, but the pure chiptune from the SNES is still superior.

And sometimes, they're just lazy. Yes, I know there are already two orchestrated versions of One-Winged Angel: one from Advent Children (which changes the words) and one from the Final Fantasy concerts (which uses the original words). Both are great. But they just decided to slap the concert version into this soundtrack. Sure, you can't go wrong with either one, but couldn't they have made a version for themselves? It's not like an avid FF music collector won't already have OWA in every conceivable incarnation by now. Or if they think OWA is already perfect, give us a version of JENOVA or Those Who Fight (they opted for Fight Further). Can't have too many of those.

The FFXII music is similarly lazy, as it's all lifted directly from the game's score.

I would say that the FFVI music probably comes out best out of all of the pieces on the disc. The three pieces they choose here are solidly arranged, and FFVI's fighting music hasn't seen as much orchestration as other pieces, so it's nice to see this one get some love.

Oddly enough, where this soundtrack is at its best is with the music that is an amalgamation of themes from the different FF games. The intro and the ending piece are both excellent medleys of iconic FF pieces.

One of the biggest failings of this soundtrack is its total lack of identity. Unlike Super Smash Bros, this soundtrack has no truly original pieces. Maybe the composer of this piece didn't think he could stand alongside Uematsu. And given some of the orchestrations, maybe he was right.

Ultimately, is this CD worth the $40+ you'll pay for it? Not really, no. Not unless you already have the The Black Mages CDs, Distant Worlds music, and several other orchestrated versions of various FF music. If you really need to scratch your FF music itch and you have everything else, this might be worth it for completeness. Otherwise, there is better FF music out there; go get it instead.
続きを読む
3人のお客様がこれが役に立ったと考えています
違反を報告
レビュー を日本語に翻訳する
すべてのレビューを参照します
トップへ戻る
Amazonについて
Amazonでビジネス
Amazonでのお支払い
ヘルプ＆ガイド
日本語ショッピングのための言語を選択します。 日本ショッピングのための国/地域を選択します。
© 1996-2020, Amazon.com, Inc. or its affiliates