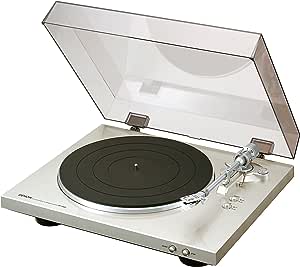 bigpaulc
5つ星のうち5.0 For this Price, BRILLIANT!
2018年12月26日に日本でレビュー済み
カラー: ブラックAmazonで購入
I'm no self-proclaimed audiophile, just someone who loves music and who decided to get back into the whole vinyl-thing about a year ago. But, you know, like every other "I'm not really an audiophile" type, I really DO care about how my music sounds! If you're thinking of buying the Denon DP-300F, if this is in your price range, then go for it. Yes, attach it to a decent-ish speaker, and you won't be disappointed.

About a year ago, dipping my toe into vinyl, I bought an Ion Audio MAX record player. It looked nice, with its wood finish, and was reasonably priced. Thought it'd be a step up from the plasticky toy record players that are obviously going to sound terrible. I was wrong. It is just a plasticky toy, but with a very nice wood finish. (It didn't merely sound poor, no. With its feeble power-supply and small turntable covered in an iffy felt mat, it refused, even, to play some records at the correct speed. Some would start slowly - the first few bars of the first track often sounded wonky - and some records wouldn't play at all!)

So, deciding to upgrade (to a proper record player) I looked at the Audio Technica LP60 and LP120 record players. Reviewers will tell you that these are your best "entry-level" players, but - to my mind - they look pretty over-priced here in Japan. I did a lot more digging and found the DP-300F by Japan's storied turntable maker, Denon. Seemed on par with (or better than, according to my vinyl-enthusiast reddit-user research) the LP120, but easier to get my hands on here in Japan, and nicely priced, with upgradeable bits. I went for it.

My word. I couldn't be happier. The set up took about ten minutes (because you've got actual, REAL, audio components to put together) and right from the off it is clear we're dealing with a MUCH better bit of kit than that Audio Max thing. We're playing a different game here. The DF-300F looks, feels and SOUNDS like a proper, grownup record player. From the cartridge via the tone arm to the adjustable counterweight and anti-skating control thing, this is clearly a REAL record player and not a toy. I bought a Soundcore Flare speaker to play it through and... MY WORD, it feels like I have rediscovered music! Seriously.

On the reviews for every record player out there, you'll find someone writing that "this is terrible, you'll have to pay blah blah blah to get a decent sound" and, while you could pay MUCH more money and get something that sounds a BIT better than this, for this sort of price range, the DP-300F sounds bloody great, and I love it. (And the cartridge is completely upgradeable, anyway.)

If there's one, small, thing I'm less than happy about with regard the the DP-300F it would be that the auto start and stop buttons are not hefty and chunky feeling. They "click" cheaply rather than "thunk" nicely. (You know how some car doors sound better - more satisfying - when closing than others? Well, it's like that.) It is a very small complaint, but there you go.

Second, it works! I got one of the last DP-300 from the US before they went out of stock and one of the channels was defective. I tried a couple other turntables in the same price range but this is the one that has the best options for the price and no fluff like a USB connection but still has a few buttons to change the speed, etc.

I won't discuss the sound as I've had CDs for over 20 years so this sounds great to me so far. Maybe I'll be more picky in the future.
続きを読む
8人のお客様がこれが役に立ったと考えています
違反を報告
レビュー を日本語に翻訳する