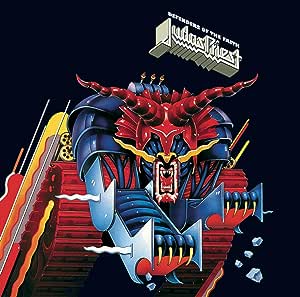 DEFENDERS OF THE FAITH

Gyula Sasvári
5つ星のうち5.0 The heaviest riff-masters of the 1980s
2018年4月27日に英国でレビュー済み
Amazonで購入
Arguably, it is the best Judas Priest album ever with fast and furious guitars, an extremely tight rythm section and perhaps the best voice of British heavy metal. Glenn and K.K.'s guitar solos, Rob's screams gave inspiration to hundreds of young musicians and singers in the 80s and 90s when Judas Priest became a legend. Without Priest there's no Slayer or there's no Megadeth or Metallica.
Judas Priest was one of the heaviest hitters of the glorious 80s and Defenders of the Faith with its ear-catching but very heavy melodies made their position in the heavy rock scene even stronger.
Their setlists still might include some of the songs from this album like Freewheel Burning, Jawbreaker, The Sentinel, When the Night Comes Down or Love Bites.
If you are a really self-respecting metalhead, you'll get this album asap! Enjoy!
続きを読む
3人のお客様がこれが役に立ったと考えています
違反を報告
レビュー を日本語に翻訳する

Mr Blackwell
5つ星のうち5.0 Vintage Priest gets the deluxe treatment....
2015年3月14日に英国でレビュー済み
Amazonで購入
Now this is a fantastic deluxe edition,it can be done if those in charge care enough.First of all the packaging,superb die cut slipcase with fold out digipak housing the discs and a neat little booklet with just enough information to make it worthwhile and some excellent live photo's capturing the moment.

Disc 1 ... The original studio album, remastered once again,truthfully i cant tell too much difference between this and the previous remaster but i'm not one for playing them side by side for every little difference.This was a quality album then and it sounds fantastic now.Its back to the original tracklisting with the bonus tracks removed,presumably because their now part of the live gig on the other discs.

discs 2/3... Priest live at Long Beach Arena 1984., its 2 discs of smoldering Priest ,at the top of their game,hard to believe they played every track from the album bar ' Eat Me Alive '. Taken ? from a radio broadcast its hard to believe why it was kept under wraps for so long,it knocks 'Priest Live' for six !!.

For a recordong 30 years old it sounds wonderful.i can only assume the (master) tapes were in great condition and used here to perfection.

aka motley
5つ星のうち5.0 Well what a surprise !
2015年10月3日に英国でレビュー済み
Amazonで購入
Well what a surprise ! not been that much of a Priestie over the years but the price for a decent CD and live album was too much temptation
Always thought they were technically skilled clever vocalist but preferred other performers so did not pay attention, apology due.
This is excellent value Metal well produced well presented and a happy crowd at the live performance not a duff track and some glorious performances as well
At this price £5 just give it a whirl, if you don't like can always give away for Xmas :)
Bet you keep it
続きを読む
4人のお客様がこれが役に立ったと考えています
違反を報告
レビュー を日本語に翻訳する

Kingcrimsonprog
5つ星のうち5.0 Judas Priest - Defenders Of The Faith
2011年8月1日に英国でレビュー済み
Amazonで購入
Judas Priest's ninth studio album was released in 1984. Defenders Of The Faith is an album often celebrated by Priest fans but isn't as famous as some of their other albums like Painkiller, British Steel or Screaming For Vengeance. The album doesn't feature as regularly in top 100 album countdowns but don't let that discourage you; this is a very good record indeed.

After the band's previous album Screaming For Vengeance had taken the band to new heights of popularity, breaking the US market two years earlier, Priest had a tough job following it up.

Defenders Of The Faith does a good job of trying however. It largely follows the formula of its predecessor, only with a marginally heavier and darker edge. Tracks, such as `Eat Me Alive,' and `Freewheel Burning,' are the type of big and exciting Heavy Metal songs that you want from Judas Priest, and they mix neatly in with slower material like `Love Bites,' or `Night Comes Down.'

It could be argued that Defender's Of The Faith is a sort of perfect center of Judas Priest's 1980s output. Not flashy or innovative, not a big departure or a new chapter but an absolutely refined and well crafted album of the sort of music you want from the band.

If you like Judas Priest, don't overlook Defenders Of The Faith. The songs are good, the performances are good and the album has all the wailing vocals and guitar solos that the band stands for. I highly recommend it.
続きを読む
2人のお客様がこれが役に立ったと考えています
違反を報告
レビュー を日本語に翻訳する