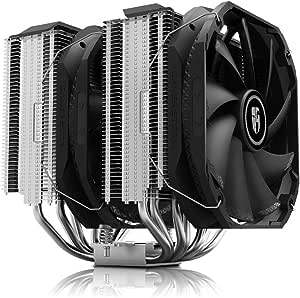 jjmc12
5つ星のうち4.0 Quiet and keeps 5800x cool
2021年1月28日に英国でレビュー済み
Amazonで購入
Surprise Surprise it’s big. I have used noctura in the past, and this doesn’t have the same Wow factor out the box. Accessories chucked in etc. However I have to say it went together easily. Thermal paste..no issues applying and its quiet. Fans wiring always a pain, could look better, but that’s been picky...it’s no cheap air cooler!
Memory clearance is the issue, it’s fine for my vengeance lpx fit under the fan with a few mm to spare . ASUs prime pro mobo. It’s more affordable than noctua and isn’t the uglyist thing you will see....for a cooler . Colour is nice and screw driver included is amazing. Instruction if you follow then are fine if small. Not pushed it much by I’m pretty impress the the most important function....cooling.
続きを読む
2人のお客様がこれが役に立ったと考えています
違反を報告
レビュー を日本語に翻訳する

Now this thing... Idle it's around 30 most of the time and in game I haven't seen it jump above 60 yet. And fans are silent. Honestly wish I'd bought it along time ago.
続きを読む
1人のお客様がこれが役に立ったと考えています
違反を報告
レビュー を日本語に翻訳する

Stefan
5つ星のうち5.0 👍
2020年11月24日に英国でレビュー済み
Amazonで購入
Perfect can't even hear it in my case. Only really bad thing is its huge won't fit in many cases and also if you need to take it off and reinstall it the thermal paste is rubbish I actually pulled my cpu from its socket and bent 5 pins luckily I bent them back.
続きを読む
1人のお客様がこれが役に立ったと考えています
違反を報告
レビュー を日本語に翻訳する

Will B.
5つ星のうち5.0 Huge size makes installation an ordeal -- but it works great!
2020年5月11日にカナダでレビュー済み
Amazonで購入
On paper this thing takes like 10 minutes to install -- it took me hours. Like, 5 hours. Have a seat, because I've got a story to share. Tldr: the cooler works great, but installation can be a nightmare if you don't anticipate all the things that can go wrong.

There are two broad reasons that my installation was so slow: (1) I had a cooler installed already, and (2), the cooler is massive and has trouble coexisting with the rest of your case.

Starting with the delays caused by the presence of an existing cooler (a Corsair H60). I had to disassemble that cooler first, and clean the thermal paste off of it and off the CPU (not my first time doing this, the trick is Isopropyl alcohol and coffee filters). Thermal paste cleaning took a while, because I had a bit of overflow from the last time I applied thermal paste (used too much), and wanted to keep it tidy and clean around the cpu socket. Thermal paste is so sticky and prone to getting everywhere, my heart was pounding the whole time. Another unexpected complication of my old cooler: the bracket on the opposite side of the CPU (which is similar to the one used by this cooler, but isn't compatible) had fused to the bracket that anchors the Intel socket clamp (the spring loaded thing) with three screws in a triangle pattern. These brackets were the same color, and completely stuck together, so looked for all the world like a single bracket. So I removed them both. But the bracket for this cooler doesn't have the three holes to anchor the screws for the socket clamp, so I had a problem. I puzzled over this for maybe an hour, before I dug up the manual for my Corsair cooler and saw that the bracket didn't include this additional sheet of metal with three screw holes in it. That prompted to tug them apart as hard as I could, and voila, they snapped apart, but it literally looked like there was glue holding them together. Truly baffling. Anyways, then I got back on track. The installation of the mounts for this cooler are a piece of cake once you have the back plate installed. I actually installed them to the left and right of the CPU, rather above and below, the first time I did it, but that was just me being dumb not paying attention to the instructions. I realized that mistake pretty quickly.

My next several hours were consumed by a different set of problems, all tied to how massive this cooler is. For context, I have a mid-tower ATX case from a custom build, and nobody would ever accuse this case of being small or compact. I never did any measurements before buying this cooler, I just assumed that it *must* be compatible with a case as large as mine. And it is... sort of... just barely.

First headache: plugging in cables (e.g. the CPU slot on the motherboard and to power fans) around this behemoth of a cooler is a nightmare. I at least had the foresight to anticipate this, but needed to spend a lot of time working on cable management and reorganizing stuff in my case to clear room and plug stuff in advance.

Next headache: RAM clearance. This is an obvious problem with this fan that people talk about, and that is kind of anticipated. As I was about to start screwing in the cooler, I panicked that the RAM was going to get in the way -- it seemed uncomfortably close to the radiators, and was only going to get close as I finished screwing in the cooler. So I looked up whether moving the ram to different slots would create an issue, and the indication I got from YouTube was "no". Ha! We'll come back to that. Next step: screw down the cooler into the mount. Goes smooth. Next step: attach the fans. This was also straightforward, although the manual doesn't make it clear exactly where the fans are supposed to go, relative to the CPU. I watched a Youtube video that helped me with that.

Problem: even with my ram moved over to slots further away from the CPU, it still got in the way of one of the fans. No problem to still mount the fan to the cooler, BUT, now the fan protrouded out too far from the motherboard, and prevented from me sealing the ATX case back up. "Whatever", I shrug, I guess I'll just leave my case open for now.

Disaster: I plug the power back in and try to turn the rig on. A bunch of RGB lights for my internals come alive, but nothing else happens. No BIOS. No backlight on my keyboard. The monitor is pitch black. Did I spill cooling paste on my CPU? Have I bent a pin? A reason for optimism: the motherboard is giving an orange "DRAM" light, but no error indicator on the CPU light. I guess I can't move the RAM to different slots after all. I know what I need to do: move the RAM back to where it was before.

Next problem: I need to remove the clamped-on cooler fans to give myself room to work to pull out the RAM sticks and move them. Except that one of the clamps absolutely refuses to come off. I spend maybe 30 minutes battling with this thing. Eventually I get wire cutters and am prepared to snap the damned things in half. The clamps laugh in the face of the wire cutters, they're no match, *but*, by basically using the wire cutters as pliers, I'm finally able to snap the clamp loose. Removing the fans doesn't give me quite enough space to move the RAM stick over, I have to keep going with my disassembly and take the cooler completely off. Not ideal to break the thermal paste seal I've just made, but not a huge deal, and easy enough.

Finally: I move the RAM back to where it was before I started this project, I screw the cooler back down, I reattach the fan clamps (with one of the fans protruding out too far to be able to close the case, but whatever): and we have BIOS! I can start the computer.

Hold on: my BIOS is telling me I have a "CPU fan error". I restart, and same thing. Hmm. I notice that one of the 60mm cooler fans isn't spinning. Have I knocked the plug loose in all these shenanigans? Well guess what, the plug is buried between the RAM and the CPU socket, and to even *see* I need to take this whole thing apart again. Ugh. I didn't come all this way to have one of the fans not work. So I take it apart again. Off come the fan clamps (Wire cutters in hand from the beginning, I'm a pro now), unscrew the cooler mount and take a look -- the plug is secure. I start my computer with the cooler dismounted to check if the fan error still happens. And it does -- but the CPU fan that wasn't spinning before *is* spinning now. It occurs to me that the "error" might be that I used to have a fan plugged in to the AIO pump plug, but now don't. It's just telling me that it expects there to be a fan that isn't there any more. Ugh. Turn it off, reassemble everything, tell the BIOS to re calibrate the fans. And we're in business baby! No more fan error, and cooling performance is fantastic. I play some games.

But about that open case. A closed case can actually be better for expelling hot air, because you can establish more of a coherent flow of air coming in and out of the case. And it is definitely better at keeping dust out, and it is definitely quieter, and it definitely looks better. I call it a night, but the next day I revisit what I can do to still close the case. After trying a couple of different things, eventually I figure out that I can mount a regular 40mm fan using the same mounts, and I replace the fan that sits over the RAM. I repurpose the 60mm fan elsewhere in my case. That does the trick--I'm able to seal the case back up (just barely), and thermal performance remains absolutely stellar.