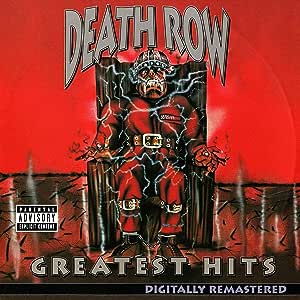 Marion "Suge" Knight's controversial Death Row records have had an undeniable impact on hip-hop culture. With its often-imitated, seldom duplicated George Clinton-sampling G-Funk sound, the label almost single-handedly built the West Coast gangsta genre, propagated via artists like Dr Dre, Snoop Doggy Dogg, Ice Cube, Tupac, and Tha Dogg Pound. Death Row's Greatest Hits features an impressive dosage of funkdafied classics. Significantly, many of the tracks are taken from two of the best LPs ever released by the label, namely Dre's The Chronic (on which Snoop made his debut appearance) and Snoop's Doggystyle. Cuts like "Lil Ghetto Boy," "Nuthin' But a G Thang," "Gin 'n' Juice," "Doggy Dogg World," and "Lodi Dodi" all sound as fresh today as they did several years ago. We also get Dre and Cube's "Natural Born Killaz," Dre's "Keep Their Heads Ringin'," and some classic--and sentimental--Tupac material like "Dear Mama," "Keep Ya Head Up," and "Me Against the World." The second CD features a glut of rare and unreleased remixes as well as some original tracks, though hardly any of these stand out. They illustrate how thoroughly dependent the label's sound is on the potent G-Funk factor it patented. --Paul Sullivan