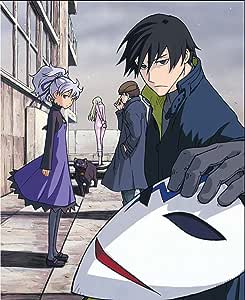 Stan
5つ星のうち3.0 Worth it if you're already a Darker Than Black fan.
2015年5月27日にカナダでレビュー済み
Amazonで購入
This premium edition is a blu ray re-release of the first season of Darker Than Black. If you wish to own the first season on blu ray, this is the only option available to you as of right now. Personally I love this anime and had no second thoughts about buying this set on day 1, saying that, I am a little disappointed with how it is presented.

First of all, the packaging is extremely quirky. It comes in a dark gray soft cover file folder which had a few dents simply from shipping due to it's non-durable design. Inside you get an art book and an oversizes cardboard digipack with sleeves for the discs. Since the discs don't 'click in' but are simply inserted into the sleeves they come loose, so 2 of the 3 discs were loose and grinding against each other when I opened it. Furthermore, the digipack is too fragile and has bent corners (probably as a result of shipping turbulence) -- again, flawed design.

Now the good thing about it all is the actual show in HD. It's great re-watching this season in crisp HD. I personally would have preferred a version similar to the Japanese blu ray which comes in a standard chip-board box. But at the end of the day I just wanted to own this show on blu ray, which I now do.

I believe this is is meant for people who are fans of the show. It is overpriced for one season of an "old" anime and the packaging is very unpractical. If you wish to get into the show, or simply want to own it but not obsessed with it, there are a few standard dvd releases which are cheaper and better to store on the shelf (oh yeah, this set is impossible to store on the shelf due to its size, it has to be laying flat). However, if you're really into the show and want it on blu ray, then you have no choice but to buy this set! And hey, to make up for your troubles that art book is pretty neat.
続きを読む
5人のお客様がこれが役に立ったと考えています
違反を報告
レビュー を日本語に翻訳する

Danny
5つ星のうち1.0 If you don’t speak and understand Japanese don’t buy
2020年7月18日にカナダでレビュー済み
Amazonで購入
I really liked this anime and I was really looking forward to rewatching it! I waited over a month for it to get here and they gave the impression that it would be in English sub or dub but that wasn’t the case. The have a couple words in English like “set up”, “chapter” and the intro for copy rights. But I’m the settings it gives you no options for subtitles and two options for Japanese audio. (And a side note the box came dinged when it arrived)
続きを読む
1人のお客様がこれが役に立ったと考えています
違反を報告
レビュー を日本語に翻訳する

Anonymous_4
5つ星のうち4.0 Quality Anime, too bad its not Blu Ray
2014年7月27日にカナダでレビュー済み
Amazonで購入
Darker Than Black, in my opinion, is a revolutionary anime. It possesses some very unique qualities and concepts that make it exceptional to watch. It almost feels like watching something along the lines of The Avengers because of the Contractors, who have special superhuman powers. The fact that these super-powered individuals have to pay a peculiar price to use their power makes them all feel more human and the show a little more down to earth. Some characters are cookie-cut archetypes, but most are fresh new personalities I hardly see in other Animes. I cannot stress enough how awesome Darker Than Black truly is. The ONLY reason I did not give it 5/5 stars is because I wished the first season came in Blu Ray format (still looks great though).
続きを読む
違反を報告
レビュー を日本語に翻訳する