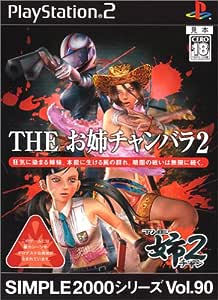 The Tylander
5つ星のうち5.0 Simple 2000 Series Vol.90: The Oneechan 2
2013年11月5日にアメリカ合衆国でレビュー済み
Amazonで購入
After spending an hour on Amazon again because it refreshes the page which erases your work as soon as it decides to pop up an advertisement on your screen, I will give the skinny, and hope I can get it done before it decides to pop up another "Apply today for our Amazon Credit Card" ad.

Prior to that a simple correction. It was also Amazons fault that the review on this page was for a substandard blower motor for a Volvo and not for the game this page is advertising. Even after deleting it several times it remained on here as a one star Volvo blower motor review and not the 5 stars that I would give this Simple 2000 series game.
As an owner of almost all of the simple 1500 series for PlayStation and the simple 2000 series for PS2, i can honestly say that every single game good or bad is delightful and different. Much like the modern indie game scene, D3 Publisher exposed all these new and upcoming games, developers, creators, and ideas to an audience. Some of these games were even picked up and published in PAL regions with translations. Although those ports vary in quality from excellent to poor, none of them came to America. Volume 90 is Onechanbara 2, but it's is the third game. Vol.61: The Oneechan was the first game and Vol.80 was a remaster. Vol.90 is The Oneechan 2 and Vol.101 is the remastered version.

If you are used to later installments on PS4, PS3, Xbox 360 and Wii, keep in mind these weren't nearly as controversial as the later ones, but the style and gameplay never really changed, just evolved. It's still fun, even without all the naughtiness in later games.... And it has bucketloads of blood and zombie body parts.

On a side note, if you intend to play this using a softmodded PS2, or using swap disc, most Simple 2000 games are in CD format instead of DVD. So you will have to use CD format to get past region locks or the game won't start. Also, the language barrier is not an issue with this and most other Simple 2000 games.

As for Onechanbara 2, it is great fun and is worth owning for the right price. I highly recommend you try some of the other Simple 2000 games. From Earth Defence Force to a 50 foot woman destroying a town. From classic fighting games and platformers to a game show with girls in bikinis doing outrageous things, you never know what your going to get! They are the true hidden gems on PS2, and most look and play as good as the triple A titles of the time.

D3 showcased what can be done on a budget, and all their Simple 2000 titles are superior graphically to almost all the modern indie games running on PC, Xbox One, and PS4. Why? They wanted to be successful professional game makers and worked with the hardware that was available. Modern indie developers just want to make a quick buck, so they build a simple web browser flash game with a cliché story and then sell it on steam and on the console storefronts with the hope their get rich quick scheme pans out.
How things change.
続きを読む
1人のお客様がこれが役に立ったと考えています
違反を報告
レビュー を日本語に翻訳する
すべてのレビューを参照します
トップへ戻る
Amazonについて
Amazonでビジネス
Amazonでのお支払い
ヘルプ＆ガイド
日本語ショッピングのための言語を選択します。 日本ショッピングのための国/地域を選択します。
© 1996-2020, Amazon.com, Inc. or its affiliates