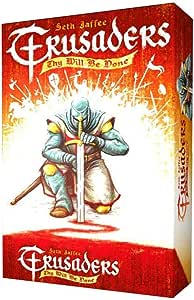 CJ
5つ星のうち5.0 Love it! Similarities to the super-popular game Scythe, but a little lighter
2019年3月28日 - (Amazon.com)
Amazonで購入
I love this game because it has many similarities to Scythe, but it's easier to teach and to play, so it is going to get played more in our home.

- Satisfying engine building mechanics keep you engaged until the end. Game's arc is one of constant growth for each player, and that sense of achievement is there for everyone. Often, you really don't know who's going to win until end game scoring (unless you choose to brain burn and keep track of all players' influence points). The roundel is really satisfying when you pull off an action with lots of tokens.
- You're free to choose your own strategy: build lots of churches and pursue influence, muster a big force and crusade a lot, focus on end game bonues for buildings, go after the Saracens for quick building contruction or the other enemies for points, or try to balance it all. The randomly placed enemy tokens and building discount tokens can give you a gentle nudge in one direction or another, but they certainly don't prescribe a path.
- This game is competitive as a race, without direct conflict between players, but you can choose some 'take that' elements if you want to spoil other players' plans. I like the fact that groups can decide how interactive they want to be, but be aware that player interaction is minimal either way. As player count increases, so will the level of interaction.
- The rules are relatively simple and streamlined, a perfect balance of ease of play and enjoyable mechanics. I still felt the theme despite the streamlined rules.
- Theme is controversial, especially given the lack of the Holy Land in the game, but I liked the focus on the historically accurate quest for influence in Europe pursued by these historic orders. The Templars, for example, had a lot more going on in terms of properties, financial holdings, and influence in Europe than they did in the Holy Land, by a large margin.
- This game suits both casual players and players who want to really plan 4 moves ahead and analyze every strategy. I personally prefer to play it more casually and have fun with it, but you can absolutely plan your roundel management to pull off super-efficient turns.
- Combat is deterministic and abstracted, much like Scythe. Euro gamers will enjoy it, war gamers will likely not.
- Variable player powers are cool. With just a few differences, they've created factions with very different advantages.
- Components of the retail version are great and I love the graphic design. I thought I was missing out since the KickStarter version has recessed slots on the player board for the buildings and the rondel wedges, but their absence has not been an issue at all.
- The rules provide options for simpler variants such as for younger or first time players: I like these options because they incrementally increase complexity and provide a good solution for every level of play.
- This is a game that I want to play again and again, probably because it's really fun and it's not an overly complex brain burner unless you want it to be. Play time is less than an hour so it always gets a "yes" to play it.

BOTTOM LINE: I love Schythe but it's hard to get it to the table due to complexity, so for me, this game is perfect. I play with my son and he loves it too, yet I don't feel like I'm playing a 'dumbed down' game at all. If a game is too complex, I just can't get it to the table, too simple and you lose a lot of the fun: this game is in the sweet spot. Highly recommended.
続きを読む
2人のお客様がこれが役に立ったと考えています
レビュー を日本語に翻訳する

I asked amazon to replace it, but amazon said they cannot replace it and they offer refund.
I am disappointed with it, because I just want perfect one, not refund.
Finally, I give up to get it...
I temporarily repair broken tokens with glue.

Again, game itself is very interesting, I love to play it, but tokens are not so.
I wish I could play with perfect tokens.
続きを読む

Glenn D.
5つ星のうち4.0 Great game, ok player boards.
2019年2月16日 - (Amazon.com)
Amazonで購入
This is a great game. The components are wood bits. The only complaint is the player board is not recessed to hold the triangle action pieces. They end up wondering a bit which looks sloppy and can knock pieces over. I’m hoping somebody makes overlays for it.
続きを読む
レビュー を日本語に翻訳する

Polcat
5つ星のうち5.0 Good game
2019年3月12日 - (Amazon.com)
Amazonで購入
It arrived on time and was a lot of fun playing. I like the rondel it is not a common mechanism.
続きを読む
レビュー を日本語に翻訳する