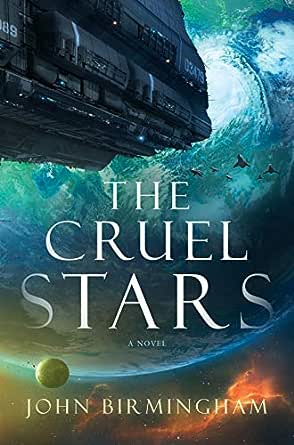 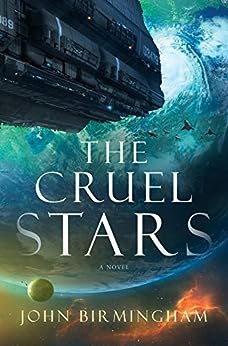 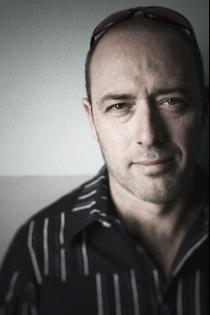 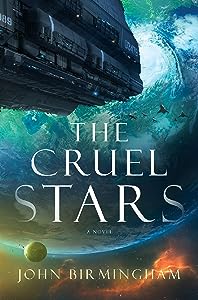 In this epic sci-fi adventure for fans of The Expanse and Battlestar Galactica, five intrepid heroes must unite to save civilization after a long-dormant enemy awakens and strikes a devastating blow

“This jarring, engrossing story of a species-wide fight for survival is recommended for all science fiction readers.”—Publishers Weekly (starred review)

The galaxy was once terrorized by the Sturm, a group of “species purists” intent on destroying any human with genetic or cybernetic enhancements. Fashioning themselves as the one true “Human Republic,” the Sturm cut a bloody swath across the stars, killing billions before finally being defeated and driven into the far reaches of Dark Space. Centuries of peace bred complacency. Everyone believed the Sturm had died out in the Dark. They were wrong.

The enemy has returned and, with a brutal and decisive attack, knocks out almost all of humanity’s defenses. Now on the brink of annihilation, humankind’s only hope is a few brave souls who survived the initial attack: Commander Lucinda Hardy, thrust into uncertain command of the Royal Armadalen Navy’s only surviving warship. Booker3, a soldier of Earth, sentenced to die for treason, whose time on death row is cut short when the Sturm attack his prison compound. Princess Alessia, a young royal of the Montanblanc Corporation, forced to flee when her home planet is overrun and her entire family executed. Sephina L’trel, the leader of an outlaw band who must call on all of her criminal skills to resist the invasion. And, finally, Admiral Frazer McLennan, the infamous hero of the first war with the Sturm hundreds of years ago, who hopes to rout his old foes once and for all—or die trying.

These five flawed, reluctant heroes must band together to prevail against a relentless enemy and near-impossible odds. For if they fail, the future itself is doomed.

Brian C
5つ星のうち5.0 Fast Paced Transhumanist Space Opera
2019年8月21日 - (Amazon.com)
Amazonで購入
Disclaimer - I know the Author in meatspace, and my substrate has drunk beers with his substrate. I bought this book with my own money, and have not received any compensation for reviewing this book. (but i would take it. Please god someone pay me to review books)

Right first off, if you're homo/trans/queerphobic this is not the book for you. Its by no means a LGBQTIA+ manifesto, but the author has included the queer community in this book, and done it with some care and dignity.
If you do like fast paced action, Plenty of story arcs, and far future technology and post human themes. This book is for you. I do wonder how Americans will handle the Australianisms in the book. It was quite heavy with slang from our neck of the woods, but i suppose turnabout is fair-play given the preponderance of American authors in not just Sci-Fi but Mil SciFi/ Space Opera.

Without spoilers, the book itself follows a number of characters through the events surrounding a invasion of the "Human Volume" by an exiled branch of humanity focused on the "Purity" of the human race and a hatred of any sort of genemodding / technological uplift. Its not hard to draw the parallels between modern day white nationalists and the authors bad guys. Still JB does a good job of not making them too much of a mustachio twirling 'nyahh' bad guys and while we are never really lead to agree with their point of view we are allowed to see that they do passionately believe what they are doing is right, and are acting from what they believe is a moral imperative. Which makes them feel both, more real and a great deal more sinister.

All in all, this is a book well worth your time.

Value - This is a good ole tome. At 416 pages it doesn’t quite get to Weber sized door stop, but neither did Weber's first forays into the genre. i suspect that my consumption of it in one night has more to do with me than the length of the book.
Re-Readability - I will get the Audiobook just as soon as my dirty little hands can do so.
Would I recommend It - I would indeed, I suspect ill be gifting a few copies of this book to friends over Christmas, i honestly think its that good.
続きを読む
15人のお客様がこれが役に立ったと考えています
レビュー を日本語に翻訳する

James V.
5つ星のうち5.0 Genre check please. And Peter Hamilton fans, come over here
2019年8月30日 - (Amazon.com)
Amazonで購入
What I couldn’t help thinking the entire time I read this was how much it resembles Peter F. Hamilton’s Night’s Dawn work. It really does, to a point where you have to wonder if it’s derivative or not. Mostly it’s not, but it does leverage many of the narrative mechanisms that Hamilton did starting with The Reality Dysfunction.

This is actually a good thing, and this book holds its own to the point where I was disappointed that I’m going to have to wait to read its sequel. When the sequel is made available, I will pre-order it.

Also, this is billed in more than one place as military sci-fi; it is not. It is space opera with detail.

If a legit first-of-three operatic sci fi indulgence is your jam, read this now.

Pros: more than one character is important in terms of reader narrative. Arc is (hopefully) long.
Cons: no sequel available yet, and hanging sucks. Hardcore Reality Dysfunction fans may feel that they could have written the first half themselves. Neither of these are really detractors.
続きを読む
8人のお客様がこれが役に立ったと考えています
レビュー を日本語に翻訳する

However, while I enjoy Birmo’s style, I’m also a lover of SF, and feel that my love of the genre should trump any personal bias if I’m going to write a public review.

It makes me very happy that I don’t have to lock away either of these aspects of my personality while writing this.

This book is a new personal best as far as growth as an author for JB. He takes the action, multiple character POVs, humor, and suspense present in his prior works and applies it to Space Opera and all of wonder that involves ... and it is just good fun.

The world-building is great. The characters are relatable ... I’m fascinated with the concept of the impact near immortality on society. I would think that first/second life experiences would have a strong hold on the formation of one’s personality. Not a spoiler, but, conceptually, imagine being born today and living through a couple of hundred years of technological advancement, you’d still be making 21st century pop culture references as a matter of course. It fits.

I’m doing my best to avoid spoilers because there are twists and turns galore. I’m a fan of Weber, Neal Asher and Nick Cole & Jason Anspach’s work ... and, while Birmo’s universe is not as grim as Cole/Anspach’s, it can be brutal. Think somewhere between Honor Harrington and Cole/Anspach.

The ending ties things together neatly, without being contrived, and leaves things wide open for the next in the series.

I’m very pleased to say that I can highly recommend this one with no hesitation.
続きを読む
4人のお客様がこれが役に立ったと考えています
レビュー を日本語に翻訳する

English Prof
5つ星のうち5.0 A Worthy Addition to an Illustrious Canon
2019年8月26日 - (Amazon.com)
Amazonで購入
I have been following John Birmingham's work for decades, and I am pleased to say that "The Cruel Stars" is every bit as good as his best. In this work, in contrast to the central themes of the Axis of Time Series, Birmingham focuses on technology and its effects on the humanity of the future. (As I read that back, I realize it is not so far off his previous efforts.) Interstellar war erupts between two factions of humanity that have developed on very different lines as a result of a previous civil war. One side is deeply suspicious of personal modification technology or enhanced physical and intellectual tech while the other sometimes seems less than human in its complete surrender to the technology that provides it with its technological prowess. The struggle is, predictably, mitigated in some ways by some of the tech faction who draw back from complete surrender to their technology and seem to recognize that there is more to humanity than its A.I.'s. The action is fast and relentless, but nonetheless, it opens space in which to explore the ideological consequences of technology. Thank you, John, for another great read.
続きを読む
4人のお客様がこれが役に立ったと考えています
レビュー を日本語に翻訳する
Amazon.comのカスタマーレビューを見る(76) 5つ星のうち4.4
click to open popover
Amazonプライム会員ならお急ぎ便、日時指定便が使い放題
さらに、映画もTV番組も見放題。200万曲が聴き放題 。クラウドに好きなだけ写真も保存可能。
> プライムを無料で試す