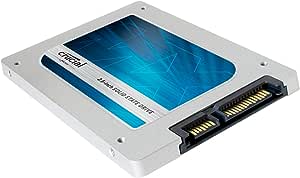 PeteB
5つ星のうち5.0 256 Crucial SSD
2015年3月16日に英国でレビュー済み
容量: 256GBAmazonで購入
Worked great. If you plan to use the cloning software then make sure that the SSD is the same size as the hard drive being replaced or make sure you have software that can clone just a partition (the one you have the operating system on). The supplied software didn't seem to do this, could be me though. Win 7 needs a system partition of 100mb to work and Microsoft recommend that this partition is on same drive as the operating system so bear this in mind when installing because if you are leaving the Win 7 system partition on the old hard drive things will work but you are doubling your chances of failure because you now need 2 drives for everything to work. I bought a 256 SSD and kept the old 500 gb hard drive in place and went for a clean Win 7 install. Worked perfectly and disk installed the 100mb partition too. I reformatted the old 100 mb partition on the old drive in just case of conflict. Had a bit of a problem with Microsoft's 200 plus updates. It got so far and then wouldn't configure. Guessed that it was a time out problem so installed the updates 50 at a time without problems. Now have a lightning fast i5 machine with 16 gb RAM. Now that MS says it will give Win 7 users Win 10 free I don't think there's any more I can do for my pc. Product once installed works great. Please read about the problems I and other users have had with wrong size screws being supplied with adapters if you want to put the 2.5 SSD in a 3.5 bay in your pc. Laptop replacements should be ok.
続きを読む
3人のお客様がこれが役に立ったと考えています
違反を報告
レビュー を日本語に翻訳する

Adam G.
5つ星のうち5.0 Excellent SSD for the price.
2015年2月26日に英国でレビュー済み
容量: 256GBAmazonで購入
Having previously used a Crucial M4 SSD, and judging by the positive vibes in general about Crucials SSD products, I sort of knew what to expect from this drive - a simple, no frills product that does its job very well and doesn't make your wallet burst into tears.

I bought the 256GB model, and was not disappointed. Admittedly, this is not the fastest SATA 6Gbit/s SSD on the market. Several heavyweight offerings, like Samsung's 850 PRO, out muscle this drive in both synthetic workload tests, and in real world performance. This drive performs admirably though for its cost per GB ratio, which for the 256GB drive at the time of submitting this review, works out at a very reasonable 31p/GB. On a single drive, I achieved around 530MB/s read and 320MB/s write - still light-years ahead of even the fastest mechanical hard drive. I bought two of these for a 512GB RAID0 stripe setup, which practically doubles those numbers, with read speeds in particular shooting north of 1GB/s. Bundled with the drive comes a serial key for a free copy of Acronis drive cloning software - a god send if you don't want to start an OS install all over again, which I certainly didn't.

Reliable, fast, and relatively cheap - partly down to the fact that since Crucial themselves manufacture the Micron NAND found in all their SSDs, they can keep their production costs lower - which for us consumers, translates into a lower retail price.

The veteran M4 was a win for Crucial a few years ago, and this is another win. I certainly think it deserves the full five stars.
続きを読む
1人のお客様がこれが役に立ったと考えています
違反を報告
レビュー を日本語に翻訳する

dugongs2
5つ星のうち5.0 Given the old girl a new lease of life
2014年10月2日に英国でレビュー済み
容量: 256GBAmazonで購入
I have a much loved (used daily) but ageing Dell Inspiron 640m E1405 laptop which must date back to 2006. Has a SATA 1 hard disk controller on a 150gb HD. Intel 945GM chipset. 2gb RAM. Its built like a tank but sadly was struggling to cope with the demands of modern life.

I thought about spending money upgrading the memory from 2gb of ram but when i ran the memory scanner it recommended this SSD drive. Everything I read said it would not run a SSD very well due to its age and there may be BIOS issues etc etc. But had to give the old girl a chance and took the plunge.

Crucial drive comes with licence for True Image from Acronis to clone the drive but I also purchased their SSD upgrade kit which provides all the leads and a spare case to turn the old HDD into a portable drive. Probably dont need this is you know what you are doing and have the correct leads but this helped me. I had terrible problems getting the drive cloning to work from within windows but read that it is more reliable using a boot disk version created within True Image to USB. I did this and it cloned first time in about 15 minutes. It allocated the extra storage equally across the 2 existing partitions which was fine.

My new SSD fitted perflectly in the cradle with the 4 existing screws. I then fired it up and held my breath and to my amazement it started perfectly. Windows loaded and all my programs and files were there. It needed one reboot to settle everything into place and now works perfectly just as before but feels slightly quicker but a lot more stable.

In terms of speed then it is not a massive improvement. The drive is read/writing about 125mb/s which is roughly a quarter the speed you would expect from sata 3 but it feels like a much more stable machine. No long pauses, no getting all muddled and freezing for ages when switching between chrome and explorer, files all load quickly and boot up and shut down much quicker.

Overall really delighted. Its put off upgrading my laptop for a while longer. This laptop has served me well and upgrade has prolonged the life and put off the need to use the dreaded windows 8 hopefully forever.
続きを読む
2人のお客様がこれが役に立ったと考えています
違反を報告
レビュー を日本語に翻訳する

elmtree
5つ星のうち4.0 Very good drive but watch out for SSD limitations..
2015年4月7日に英国でレビュー済み
容量: 256GBAmazonで購入
Have purchased and installed two of these last month. They are easier to install than other makes, but like other value packaging, they arrived with no software or detailed instructions to help installation.

I used 'Paragon Disk Manager' to install and move data from the bigger HDD to the smaller SSD. It worked the first time in both systems.
The improvement in speed is very impressive. Windows' loading is twice as fast as before and all applications seem to run faster and smoother.

BUT not all has been smooth though. A few days in use and one morning my the laptop refused to boot. It reported that it could not find a boot drive. Asking to check cables or try another boot device.

Panic would have been an extreme understatement of how I felt. I saved long hours of very important work to my disk. The data lost would have been impossible to replace.

Whilst I have retrieved my data from damaged HDDs in the past, this is much less certain with SSD. Sending a damaged SSD for professional data retrieval can be very expensive as well as less certain than in the case of HDDs.

After an hour or so I switched the machine on again and was delighted to watch it boot without a problem. It has been working for a week since without a glitch. No idea whatsoever what made it report the error and refuse to boot. The installation was easy and there was no room for physical mistakes. It worked for days before and been working well since.

Lessons learned: Backup your data as frequently as you can.
I have inserted a 32GB SD card in the slot available on my laptop and have been saving all my work (manually) twice before I switch off, whilst I am searching for a more reliable automatic backup solution
続きを読む
違反を報告
レビュー を日本語に翻訳する

Stephen
5つ星のうち5.0 Fast enough drive for upgrades
2014年11月16日に英国でレビュー済み
容量: 256GBAmazonで購入
Installed on my Dell Vostro 1700, on 9th Nov 2014. Chose a 256Gb drive because of the slightly improved performance over the smaller drive, and because the smaller drive might have been a squeeze to fit on the data that I have. The whole installation was simple, the resultant machine performance is so far excellent. Didn't need to use the 2mm spacer because the Dell drive-bay has a metal carrier to which the drive is fixed before the sub-assembly is inserted into the laptop.

Due to the demise of XP, and the awful performance of Vista Home Premium, I have upgraded to Windows 7 Pro. I decided to use a new disk for the software upgrade because I read that W7 wipes-out the disk contents during a new installation, and therefore I still have the Vista disk as insurance. So saying I migrated all the data from Vista to W7 with no problem, used the Easy Transfer utility to put data on an external drive, and then copied it into W7 after the installation was complete. Installation of W7 was also simple; put in the DVD, answer the usual questions and was surprised to find everything complete when I got back from making a coffee. With W7 I should be able to run TRIM commands to keep everything running nicely.

I now have 3 machines fitted with different SSDs. This Crucial MX100 drive was bought after some research online, and deciding whether I thought it was worth the risk. I have had no problems. A week is not really a long time but everything appears to be working well.
続きを読む
違反を報告
レビュー を日本語に翻訳する
すべてのレビューを参照します
Amazonプライム会員ならお急ぎ便、日時指定便が使い放題
さらに、映画もTV番組も見放題。200万曲が聴き放題 。クラウドに好きなだけ写真も保存可能。
> プライムを無料で試す