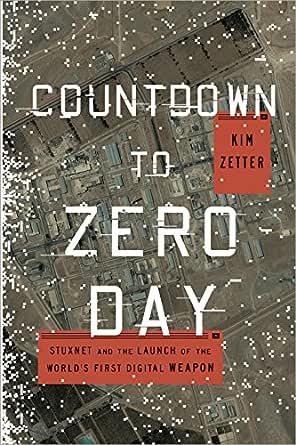 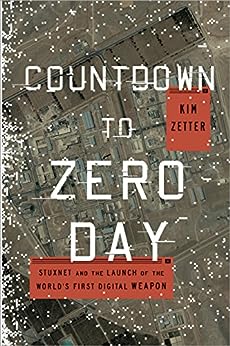 Top cybersecurity journalist Kim Zetter tells the story behind the virus that sabotaged Iran’s nuclear efforts and shows how its existence has ushered in a new age of warfare—one in which a digital attack can have the same destructive capability as a megaton bomb.

In January 2010, inspectors with the International Atomic Energy Agency noticed that centrifuges at an Iranian uranium enrichment plant were failing at an unprecedented rate. The cause was a complete mystery—apparently as much to the technicians replacing the centrifuges as to the inspectors observing them.

Then, five months later, a seemingly unrelated event occurred: A computer security firm in Belarus was called in to troubleshoot some computers in Iran that were crashing and rebooting repeatedly.

At first, the firm’s programmers believed the malicious code on the machines was a simple, routine piece of malware. But as they and other experts around the world investigated, they discovered a mysterious virus of unparalleled complexity.

They had, they soon learned, stumbled upon the world’s first digital weapon. For Stuxnet, as it came to be known, was unlike any other virus or worm built before: Rather than simply hijacking targeted computers or stealing information from them, it escaped the digital realm to wreak actual, physical destruction on a nuclear facility.

In these pages, Wired journalist Kim Zetter draws on her extensive sources and expertise to tell the story behind Stuxnet’s planning, execution, and discovery, covering its genesis in the corridors of Bush’s White House and its unleashing on systems in Iran—and telling the spectacular, unlikely tale of the security geeks who managed to unravel a sabotage campaign years in the making.

But Countdown to Zero Day ranges far beyond Stuxnet itself. Here, Zetter shows us how digital warfare developed in the US. She takes us inside today’s flourishing zero-day “grey markets,” in which intelligence agencies and militaries pay huge sums for the malicious code they need to carry out infiltrations and attacks. She reveals just how vulnerable many of our own critical systems are to Stuxnet-like strikes, from nation-state adversaries and anonymous hackers alike—and shows us just what might happen should our infrastructure be targeted by such an attack.

Propelled by Zetter’s unique knowledge and access, and filled with eye-opening explanations of the technologies involved, Countdown to Zero Day is a comprehensive and prescient portrait of a world at the edge of a new kind of war.

"Immensely enjoyable...Zetter turns a complicated and technical cyber- story into an engrossing whodunit...The age of digital warfare may well have begun."
--Washington Post

"Exhaustively researched...Zetter gives a full account of this “hack of the century,” as the operation has been called, [but] the book goes well beyond its ostensible subject to offer a hair-raising introduction to the age of cyber warfare."
--Wall Street Journal

“Part detective story, part scary-brilliant treatise on the future of warfare…an ambitious, comprehensive, and engrossing book that should be required reading for anyone who cares about the threats that America—and the world—are sure to be facing over the coming years.”
—Kevin Mitnick, New York Times bestselling author of Ghost in the Wires and The Art of Intrusion

“Unpacks this complex issue with the panache of a spy thriller…even readers who can’t tell a PLC from an iPad will learn much from Zetter’s accessible, expertly crafted account.”
—Publishers Weekly (starred)

“A true techno-whodunit [that] offers a sharp account of past mischief and a glimpse of things to come…Zetter writes lucidly about mind-numbingly technical matters, reveling in the geekery of malware and espionage, and she takes the narrative down some dark electronic corridors… Governments, hackers and parties unknown are launching ticking computer time bombs every day, all coming to a laptop near you.”
--Kirkus

"An exciting and readable story of the world's first cyberweapon. Zetter not only explains the weapon and chronicles its discovery, but explains the motives and mechanics behind the attack -- and makes a powerful argument why this story matters."
--Bruce Schneier, author of Secrets and Lies and Schneier on Security
商品の説明をすべて表示する

Adam Caudill
5つ星のうち5.0 Excellent telling of a very complex story
2014年11月16日 - (Amazon.com)
形式: Kindle版Amazonで購入
I know quite a few of the researchers that were involved in reverse engineering Stuxnet and Flame - so I was able to watch the story unfold with a behind the scenes view - what's presented in here is a very accurate, and insightful view of one of the most important security discoveries in recent years.

Stuxnet, et. al. presented the security industry with a huge problem - and the implications are still being sorted out to this day. Government use of malware, and how the industry should handle it when discovered are topics that are still being debated on a daily basis. Kim does a great job on explaining the issues, and giving readers plenty to think about.

From a technical perspective, the book goes into enough detail so that those of us familiar with the topic know exactly what is being discussed and it's implications, while not going overboard and overloading non-technical users with incomprehensible details. The book has a good narrative style, while covering technical detail and including details on the sources for information. Throughout the book are footnotes that list source information, additional notes that explain context, or provide additional details that don't fit in the narrative telling - I strongly suggest that you read the footnotes, as they offer very useful information.

All in all, I strongly recommend the book, well worth it.

J. Myers
5つ星のうち5.0 Highly recommended for its content and for how well it is done.
2018年4月20日 - (Amazon.com)
形式: Kindle版Amazonで購入
This book is superbly researched and is written clearly and interestingly. It is quite outstanding in these two respects. To follow it, you will need to know a little bit about how computers and the internet work, but you don't need to know the technical parts. You do need to be a person who can cope with the technical terms and processes that are presented and described as you read along. Given that most readers will know how the story turned out, the author does a great job of maintaining the suspense of how the investigators (and the creators) did their work.

Toward the end I found it a little less interesting, but that was o.k. I had learned so much more than I set out to learn.

The Kindle version is very well implemented. You can check a footnote or a definition and go back to the text.

I am going to repeat myself and say that this book is a model of both research and of technical writing.

Z
5つ星のうち5.0 Actually two books in one
2017年6月13日 - (Amazon.com)
形式: ハードカバーAmazonで購入
This book is an examination of Stuxnet and related tools such as Duqu and Flame. In that capacity it is detailed and exhaustive--perhaps to a fault. On the whole, however, the story is fascinating and Kim Zetter does a great job telling it.

But more than just Stuxnet, the book examines the intersection of infrastructure and malware, and the growing military-cyber complex. This area of focus leads to perhaps the most interesting sections of the book. The chapter on vulnerabilities in US infrastructure is a real eye-opener.

Either one of these topics would make the book a must-read for those interested or involved in security and cyber warfare. Having both of them together, marshaled by an excellent author, is a real treat.
続きを読む
12人のお客様がこれが役に立ったと考えています
レビュー を日本語に翻訳する

JEDrury
5つ星のうち5.0 a chilling book raising immense issues for the future
2014年12月6日 - (Amazon.com)
形式: Kindle版Amazonで購入
Kim Zetter's "Countdown to Zero Day" has three parts; Stuxnet's discovery by the world wide, anti-virus techie community, the governmental development of the malware "exploit" and its progeny (Stuxnet, Duqu, Flame, etc.), and, the immense moral and legal consequences for the United States and Israel by initiating the first government-sponsored attack in the new age of cyber-warfare between nations.

Zetter leads with an exhaustively detailed technical description of exploits ("attack code that hackers use to install viruses") and "zero day" exploits ("hacking world's most prized possession because they attack holes that are still unknown to the software maker") and the inadvertent discovery by the anti virus tech community of Stuxnet and its infection into specific PLCs, or control mechanisms, which regulate the centrifuges at Iran's Natanz nuclear facility. While heavily technical in parts, the detail is a fascinating "who done it " even for the lay person.

The book's middle portion strongly infers that Stuxnet's complex creation came about through a secret collaboration of the United States and Israel, identifying its start under the Bush administration and endorsed and enthusiastically used by the present Obama administration. The concluding two chapters confront the moral and legal issues in unleashing this virus and how by opening this Pandora's Box the stage has been set for future cyber warfare. She notes prophetically in the end, "where the United States led, others will follow . . . [and how this country] lost the moral high ground from which to criticize other nations for doing the same. " How true !
続きを読む
11人のお客様がこれが役に立ったと考えています
レビュー を日本語に翻訳する

R.Sudhagar Raghavan
5つ星のうち4.0 Great Insight into Cyber Warfare
2016年4月26日 - (Amazon.com)
Amazonで購入
This book opens up the secretive world of Cyber War. What surprised me what the level of investigation and research done by the author. The writer provides in-depth and detailed description of the investigation that exposed the Stuxnet, its inner working as well as its creator. The story is fascinating and offers many previously unknown and unpublished details that likely to shock most readers. This is truly a ground breaking work on Cyber Warfare. If there is a criticism, it is the length and sometimes unnecessary details. A little editing and pruning would have helped, especially to non-technical readers. However on the whole, this is a wonderful book that I would strongly recommend to all those interested understanding how Cyber Warfare is waged.
続きを読む
6人のお客様がこれが役に立ったと考えています
レビュー を日本語に翻訳する
Amazon.comのカスタマーレビューを見る(326) 5つ星のうち4.6
click to open popover
Amazonプライム会員ならお急ぎ便、日時指定便が使い放題
さらに、映画もTV番組も見放題。200万曲が聴き放題 。クラウドに好きなだけ写真も保存可能。
> プライムを無料で試す