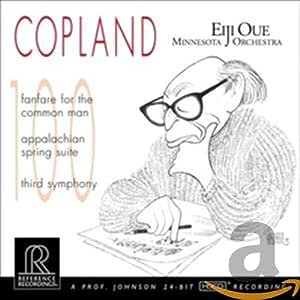 This release--part of a wave that will soon grow tidal in honor of the 100th anniversary of Aaron Copland in 2000--doesn't exactly rewrite the map on America's beloved composer. It collects three of his most familiar works created during (and, in varying degrees, reacting to) his country's experience of World War II: the version of "Appalachian Spring" for orchestral suite, the "Fanfare for the Common Man," and the Third Symphony (which incorporates the fanfare in its final movement and, as Copland himself wrote, reflects the "euphoric spirit of the country" following the war's conclusion). But the charismatic Eiji Oue proves to have a convincing and sensitive connection to these works.

A protégé of Leonard Bernstein, Oue was bequeathed the baton used by Bernstein in his final concert--the musical equivalent of a laying on of hands--and he opts to bring out a similar kind of multilayered American Romanticism, mixing transcendentalist vision with sinewy, driving vitality. The range of color and deep focus Oue elicits from the Minnesota Orchestra give yet another example of how the old "tier" hierarchy of American orchestras is eroding; there are excellent, tender wind solos, nicely balanced bodies of strings, and pulse-raising brass, especially in the Third. Oue finds a way to make the transitions between tempos and sections breathe effectively (above all when the music shifts to a faster gear), and his fine ear does justice to the vertical density of Copland's sound--as does the justly acclaimed Reference Recording range of clarity. While Oue doesn't really break any new interpretive ground (his Third feels too close in overall concept to Bernstein's own canonical recording--down to following the cut of several measures of triumphant D major on the score's final page), the glory of that ear-delighting dynamic range and subtlety is a definite advantage for audiophiles. --Thomas May

STEWART CROWE
5つ星のうち5.0 A generously filled superb recording with first rate performances of well and lesser known Copland masterpieces!
2013年2月21日に英国でレビュー済み
Amazonで購入
Copland's music depicted the values and mores of an America that was as much myth as the nobility and righteousness of the Edwardian Britain depicted in the music of Elgar, but I'm more than willing to suspend belief and happy to "buy into" both. I like to think of Copland in his "pioneer mode" as the John Ford of music,of whose films I am also a great fan, recalling that Ford once reputedly met Wyatt Earp who said of the history of the West that "when truth clashes with legend, print the legend." It's perhaps emblematic of America that the composer who most touches the spirit of that country-and the listener-was a Lithuanian Jew who would probably have been burned alive by The Pilgrim Fathers (they burned Quakers after all!). Copland's music contains allusions to early folk tunes, Shaker Hymns, so-called "Negro Spirituals" and Irish melodies- through to jazz rhythms in works such as his clarinet concerto, and frequently its seemingly simplicity is its greatest strength. So much American music derives from Copland, including notably both Bernsteins-Leonard and Elmer (not related). I love it.
This well filled disc-72 minutes-recorded in 2000 in the Prof Johnson HDCD 24Bit recording series contains a fine selection of his best works. Let me say at once they have never sounded so well-this is one of Reference Recording's finest technical accomplishments! There is a nicely rounded structure to the content, beginning with the renowned Fanfare for The Common Man followed by the equally popular Appalachian Spring Suite and ending with the less familiar Third Symphony.
The Minnesota Orchestra play what is no doubt familiar music to them with style, affection and virtuosity. The recording is very spacious, detailed and with minimal compression resulting in a very wide dynamic range-percussion is thunderously impressive. Eji Oue proves himself a most sympathetic interpreter, fully catching the grandeur of the Fanfare, shaping beautifully the ballet suite where the tender sections are especially exquisite and the rumbustious sections vividly portrayed with swagger and humour-and the great hymn melody nobly stated. There is none of the occasional reticence which has characterised some performances under his baton. One small gripe is that the suite is not divided into tracks-but this is a minor gripe indeed.
For me the real gold is the symphony, which is a virtuoso piece that comes off wonderfully well in these hands. The 4th movement is of course a variation on the opening Fanfare, which is restated in a differing orchestration and is then elaborated upon in a set of dazzling variations, hence my earlier comment about this being a nicely rounded collection. There is nothing intractable about this symphony, with none of the more compressed modernism that Copland employed in later works.
Whether you are looking to explore Copland's music for the first time, adding to your collection or looking for a sonic spectacular, this recording satisfies in every respect. There are many fine alternatives, including of course definitive performances conducted by Copland himself and fine versions by Leonard Bernstein and Dorati for example, but I believe that this is the only compilation of these particular works, and none of the alternatives can match the sonic splendour of this recording. Highly recommended. Stewart Crowe.
続きを読む
2人のお客様がこれが役に立ったと考えています
違反を報告
レビュー を日本語に翻訳する

Dr. Tim Parker
5つ星のうち5.0 A superb Fanfare with great engineering. A solid Appalachian, and a pretty good Third Symphony. Well done!
2016年8月8日にカナダでレビュー済み
Amazonで購入
Remember when you would buy Telarc discs for the thumping bass drum? Like many music lovers, I think I bought everything put out on that label just for the drum sound, which taxed my turntable and my speakers, and I loved it. I particularly remember buying a disc with Copland's Fanfare for the Common Man on it, and marvelling at the sound.

Well, Oue and the Minnesota Orchestra have outdone that recording, both in engineering and musicality. The opening drum thwacks are deep, controlled, and resonant: the horns perfectly played and stable in the sound stage. The engineering is superb; every nuance there. This is, without doubt, my favorite Fanfare recording and worth buying this CD for all by itself. But wait...as they say on TV...there's more! You get a lovely recording of the Appalachian Suite, nicely paced and as good as any other version I have. And, if you buy now (this TV reference is getting stale)...you also get the complete Third Symphony, all at no extra price! Are these three works the best on disc? Not really (although I do prefer this Fanfare), the Appalachian Spring is enjoyable, but I do think there's a few better Thirds (Bernstein springs to mind), but that doesn't mean this disc isn't excellent. The inerpretations are all solid and if this is your only recording of these works, you won't be badly served.

These are not exactly new recordings: they were done in 2000, and they were stellar back then and they remain such. My CD plays in HDCD mode, which adds a touch of higher definition to the recording. This CD is a must-have for anyone building a Copland collection, or someone who appreciates really well recorded music; Reference is stellar here.
続きを読む
違反を報告
レビュー を日本語に翻訳する