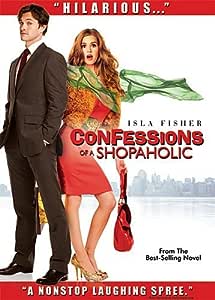 Confessions of a Shopaholic / [DVD] [Import]

Shouna Falconer
5つ星のうち1.0 Yuck! Avoid, Avoid!
2016年2月9日に英国でレビュー済み
Amazonで購入
The Shopaholic books are like marmite - you either hate them or you love them and want Becky as your best friend. I belong to the latter category, but this film is truly awful. Surely Sophie Kinsella doesn't like it either? I can't imagine J K Rowling letting anyone do to Harry Potter what has been done to Becky Bloomwood. On the other hand, if the money is good enough, then why shouldn't she sell her soul? I think I would :o)

I'm not going to say anything about the film's plot because if you 've read some of the books you will know the premise, and if you haven't, I've no wish to encourage you to watch the film as it's so bad.

So I'll just say a little about what makes it so terrible. For starters, Becky as an American just doesn't work. While a lot of the second book is actually set in New York, Becky goes there temporarily, as an outsider, and ends up in quite a different job from the one in the film. Her friend Suze is even less believable as an American - she's supposed to be an English aristocrat and since her blonde hair is frequently referred to, the dark haired American actress is completely out of place. And then there's Tarkie. Anyone who's read the books can see that he can't be American either. And how about Becky's parents? Graham and Becky Bloomwood are a stereotypical English couple, a caricature really, suspicious of anything new and foreign, and with horizons that don't extend much beyond their home counties garden. OK so it's an American film, but there are American actors and actresses skilled in British accents, and they did manage to drum up an English actor for the part of Luke, so why not some more? There was no need to set the film in New York.

Secondly, the characters are changed too muck. Derek Smythe is a comical, slightly schoolmasterly but avuncular figure in the books, not an evil pantomime villain. Becky and Suze really don't have to behave like shrieking high school kids just because they are American. That's like having Scottish people wear tartan and eat haggis. Yes, Becky is a dipstick, but not brainless. There are many good quality American romcoms around, with good American actors playing sensible people. What went wrong here? And Luke is unrecognisable. Why have him with bad dress sense? He has impeccable taste in the books and it's a large part of his character.

My final problem with it is the lacklustre plot. Bits and pieces are taken from the original and put together with bits that could have come from another film. The result is a kind of slapstick that isn't even remotely funny and furthermore fails to shine any light on Becky's true character, which, in the books, is complex and interesting.
続きを読む
3人のお客様がこれが役に立ったと考えています
役に立った
フィードバックを送信中...
フィードバックをお寄せいただきありがとうございます。
申し訳ありませんが、お客様の投票の記録に失敗しました。もう一度試してください。
違反を報告
レビュー を日本語に翻訳する

Peter Joshua
5つ星のうち2.0 I really wish I hadn't bought it
2013年1月30日に英国でレビュー済み
Amazonで購入
I loved the books eries so much and I thought in the first and second books, Becky's character was hilarious. However, the film has ruined that completely.
1) It is set in America, for some reason unknown, yet Luke Brandon is English. Why? There seems to be no sense in this decision, since the second book Shopaholic Abroad is about her move from England to New York. They could have got two seperate films out of it rather then merge them into one crazy one.
2) In the book, Becky is not so obsessed by clothes as in the film. She tries so hard to budget and make more money, but Becky in the film just seems to not even try and do anything to help her situation.
3) Derek Smeath is turned from a kindly father-type figure to a horrible debt-collector with no sense of remorse. Why? There was no need for this transformation.
4) Becky's parents look way too young, since she is supposed to be about 26 in the film, and her parents don't look much older.
5) Important characters in the book sre missing from the film. Why? They were good and you cared about them when you read it.
DON'T LET THE FILM SPOIL THE BOOK! IT'S ONLY REDEEMING POINTS ARE IT WAS MOSTLY WELL ACTED.
続きを読む
5人のお客様がこれが役に立ったと考えています
役に立った
フィードバックを送信中...
フィードバックをお寄せいただきありがとうございます。
申し訳ありませんが、お客様の投票の記録に失敗しました。もう一度試してください。
違反を報告
レビュー を日本語に翻訳する

Susie
5つ星のうち2.0 Read the book instead
2011年6月20日に英国でレビュー済み
Amazonで購入
What a shame, this is one of my all time favourite book, but the film was nowhere near as good.All my favourite bits from the book were missing. Having said that if you dont read the book first, you may completely enjoy the film as you dont know what you are missing. It doesnt show her shopping habits nearly as much as the book does. The book made me laugh out loud at certain points (which reminded me of my own shopping habits), but none of this was in the book, in fact she hardly did any shopping at all apart from her G & D scarf!!) Its easy to watch but just really not that good at all. I was very dissapointed and if you have read the book i would definitely not recommend the film...sorry :-(
続きを読む
1人のお客様がこれが役に立ったと考えています
役に立った
フィードバックを送信中...
フィードバックをお寄せいただきありがとうございます。
申し訳ありませんが、お客様の投票の記録に失敗しました。もう一度試してください。
違反を報告
レビュー を日本語に翻訳する

Jenny Amponsah
5つ星のうち5.0 One of the most girliest films ever!
2019年2月11日に英国でレビュー済み
Amazonで購入
I’m a huge fan of the books and although the film detracted away from the story I still enjoyed it. Isla Fisher played the part of Becky Bloomwood very well! A girlie chick flick to enjoy with the girls and one to watch again and again!
続きを読む
役に立った
フィードバックを送信中...
フィードバックをお寄せいただきありがとうございます。
申し訳ありませんが、お客様の投票の記録に失敗しました。もう一度試してください。
違反を報告
レビュー を日本語に翻訳する

JessiesMum
5つ星のうち2.0 Ok for a cheap movie, but does not live up to the book
2011年9月1日に英国でレビュー済み
Amazonで購入
I really enjoyed the Shopaholic books and was quite excited about seeing the film... I had some memories of seeing the film advertised, but it wasn't until I bought the DVD and got 10 minutes or so into it that I remembered I'd seen it on television. The reason I hadn't remembered seeing it was that it was so very very different to the book. Making "Becky" American was a mistake (in my humble opinion) - more to appeal to a mass market than to stay true to the fabulous character from the books. The film is ok - easy to watch and enjoyable enough, but just too different to the book for me.
続きを読む
2人のお客様がこれが役に立ったと考えています
役に立った
フィードバックを送信中...
フィードバックをお寄せいただきありがとうございます。
申し訳ありませんが、お客様の投票の記録に失敗しました。もう一度試してください。
違反を報告
レビュー を日本語に翻訳する
その他の国際レビューを読み込む

Ms. Verena E. Evans
5つ星のうち1.0 Rubbish!
2012年9月21日に英国でレビュー済み
Amazonで購入
I have just discovered the Sophie Kinsella books and read them all very quickly...........they are hilarious!
This film is rubbish and so far removed from the actually contents of the books. I hated it and I am surprised that the author allowed such blatant mis interpretation of her novel.
続きを読む
5人のお客様がこれが役に立ったと考えています
役に立った
フィードバックを送信中...
フィードバックをお寄せいただきありがとうございます。
申し訳ありませんが、お客様の投票の記録に失敗しました。もう一度試してください。
違反を報告
レビュー を日本語に翻訳する

Mrs. P. A. Mason
5つ星のうち5.0 Confessions of a Shopaholic DVD
2010年3月9日に英国でレビュー済み
Amazonで購入
If you are a fan of Sophie Kinsella's Shopaholic books then you must see the DVD.Isla Fisher plays the part of Becky Bloomfield to perfection with her happy carefree shopping ways.If it gleams,glistens or is just there in front of her she must have it - including a very expensive emerald green scarf that would pay for the entire wardrobe of most girls.Go for it and shopping will never be the same again.
続きを読む
4人のお客様がこれが役に立ったと考えています
役に立った
フィードバックを送信中...
フィードバックをお寄せいただきありがとうございます。
申し訳ありませんが、お客様の投票の記録に失敗しました。もう一度試してください。
違反を報告
レビュー を日本語に翻訳する

Mrs. Victoria M. Jones
5つ星のうち4.0 Okay, nothing new but enjoyable
2010年1月11日に英国でレビュー済み
Amazonで購入
There is nothing new or particularly intelligent about Confssions of a shopaholic, but what you do get is a nice, heartwarming chic flick. Becky Bloomfield dream of working for a vogue style publication, she loves fashion and is a girl who truely believes shopping will improve her life with mannequins telling her how this will happen. Of course nothing works out how she plans it and her shopping leaves her with huge bills she can't play.
There are some really enjoyable moments, which make you smile and laugh. Opening your credit card bills over tequila, the AA stle shopoholic meetings and Isla Fisher is pretty good and the clothes are fabulous, Patrica Field who does the clothing design for Sex In the City does this movie.
If you like movies like: Sex in the city, devil wears prada, etc you'll enjoy it. if you don't like chick flicks or Romantic comedy you should probably avoid.
As always with adaptations of books don't compare it too much to the book.
続きを読む
1人のお客様がこれが役に立ったと考えています
役に立った
フィードバックを送信中...
フィードバックをお寄せいただきありがとうございます。
申し訳ありませんが、お客様の投票の記録に失敗しました。もう一度試してください。
違反を報告
レビュー を日本語に翻訳する